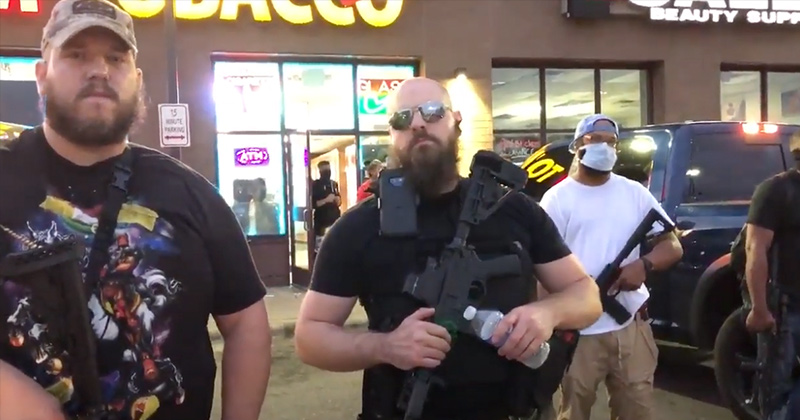 Four armed men were filmed standing in front of businesses in danger of being looted on Wednesday night as an anti-police brutality protest in Minneapolis, Minnesota quickly turned into an all-out riot.

Looters ransacked many businesses and set the city ablaze as a reaction to the death of George Floyd, who was killed by a police officer last week.

Interviewed by the Minnesota Reformer, one of the men explained they were out to stop the police from trampling on the protesters’ rights.

“Cops are a lot less likely to tread on people’s rights when there’s other armed Americans with them. So I figured it’s about damn time that some heavily armed rednecks stood with fellow citizens,” the first man stated.

When asked why they were protecting the store in the background, the pair described heading to the shop to purchase some tobacco and finding out it was closed and the owners were out front with machetes to defend their businesses.

“We heard that and we thought ‘we better kit up and see if those guys need help,’ and it turns out these guys are out here with machetes and shattered windows – trying to keep looters out of their business because cops can’t get here,” another armed protester said.

“So, you know, I figure before there were cops, there were just Americans. So here we are,” he continued.

The two guys also compared the situation to the L.A. riots where shopkeepers famously used firearms to deter looters from their stores.

“Bottom line, justice for Floyd, and I hope they stop looting at some point,” one of the men announced, adding, “If there were more of us we could go stop us from looting, but it’s just us four.”

Two of the four armed men who did not speak in the Minnesota Reformer interview were minorities and therefore weren’t mentioned in mainstream media articles covering this story.

Instead, establishment media is using this video to portray armed white men as the enemy of the protesters when in reality they are openly siding with the George Floyd protest.

Several heavily armed black Americans can be seen standing guard outside black-owned businesses in St. Paul in the following video.