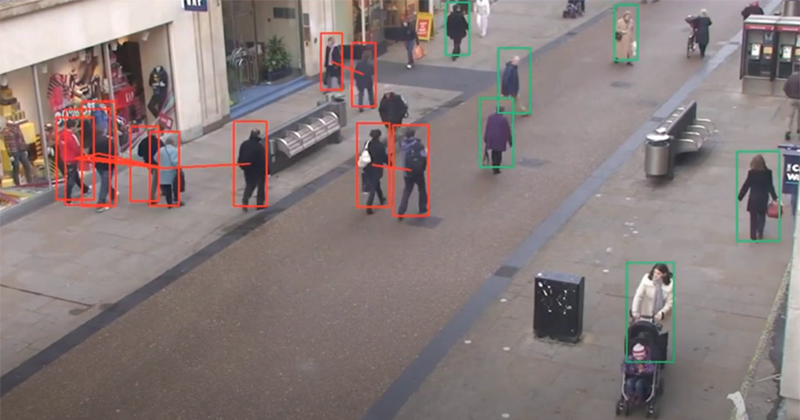 Welcome To The prison planet

As PC plods in the UK and keystone cops in the US continue to bumble around trying to operate Chinese made drones, numerous tech companies are developing more sophisticated tools that will allow  law enforcement to more effectively police social distancing rules.

Californian software developer Landing AI has created video surveillance software that watches people and sounds the alarm if they get too close to one another.

“Landing AI has developed an AI-enabled social distancing detection tool that can detect if people are keeping a safe distance from each other by analyzing real-time video streams from the camera,” the company proudly boasts in a statement.

Landing AI explain that the system works by using an artificial ‘neural network’ to detect each person and puts them (oh the irony) in a box. Then, if two boxes get too close to each other they change from green to red. At that point it will be up to the police to send in compliance robots, kill squads, or whatever they have decided we deserve.

A similar technology is already being introduced by Amazon in its warehouses, with the company threatening workers with the sack, if they violate social distancing “guidelines”.

Police in Westport, Connecticut are also going to be testing a “pandemic drone” that monitors citizens’ temperatures from almost 200 feet away and detects sneezing and coughing as well as heart and breathing rates.

Developed by Draganfly Inc., the software loaded onto the drone cameras also identifies individuals, whose safe distance areas turn red if they get too close to each other.

With the justification of the Chinese coronavirus now firmly embedded in society, there is a rush on to profit from stripping away privacy and personal freedoms.

If this is our future, we truly have arrived at the prison planet.