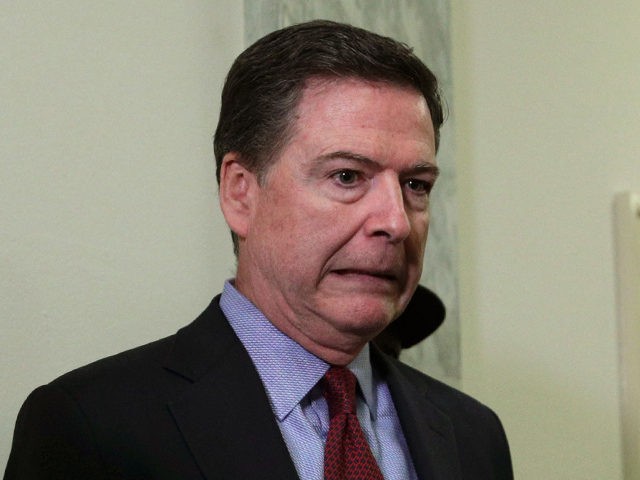 Newly released material exposes that James Comey’s FBI obtained information from a source that the wild and unsubstantiated “golden showers” claim about President Trump was not only false but was likely a product of Russian disinformation.

A USIC report dated February 27, 2017, contained information about an individual with reported connections to Trump and Russia who claimed that the public reporting about the details of Trump’s sexual activities in Moscow during a trip in 2013 were false, and that they were the product of RIS (Russian Intelligence) “infiltrate[ing] a source into the network” of a who compiled a dossier of that individual on Trump’s activities.

Christopher Steele’s dossier infamously claimed that while Trump was staying in the presidential suite at the Ritz Carlton Hotel in Moscow in 2013, the real estate mogul hired “a number of prostitutes to perform a ‘golden showers’ (urination) show in front of him.” The dossier claims Trump wanted to “defile” the bed because he learned that President Obama had used the same suite during a trip to Russia.

As Breitbart News reported, the IG report released in December revealed the FBI in January, March and May 2017 conducted interviews with the main source cited in Steele’s dossier and found glaring issues with the way Steele reported the “pee” claim. Now the newly declassified footnote adds a February date where the FBI documented more information showing the “pee” claim was false.

Firstly, during this period Comey signed successive applications to obtain FISA warrants to spy on Carter Page, a tangential advisor to Trump’s campaign. The FISA warrants repeatedly relied on the dossier authored by Steele which contained the “golden showers” claim. Steele was working on behalf of Fusion GPS, which was paid to produce the dossier by Hillary Clinton’s 2016 campaign and the Democratic National Committee via the Perkins Coie law firm.

Second, there is no evidence that Comey ever shared his knowledge discrediting the “pee” claims with Trump. Instead, Comey admitted to making the repeated decision to push back against requests from Trump to investigate the origins of the infamous “pee” claim made inside the anti-Trump dossier.

During his prepared remarks for the Senate Select Committee on Intelligence, delivered on June 8, 2017, Comey related that he pushed back against a suggestion from Trump to investigate the dossier’s sexual claims.

The former FBI chief stated that following a January 6 Oval Office meeting with Intelligence Community leaders, Comey “remained alone with the President Elect to brief him on some personally sensitive aspects of the information assembled during the assessment.”’

It is clear Comey was referring to the dossier since he writes the “salacious and unverified” material was about to be publically reported by the news media. Four days after that briefing, the dossier produced by Fusion GPS was published by BuzzFeed.