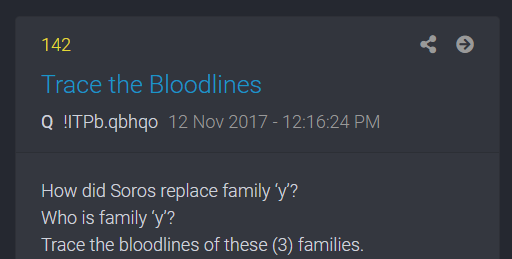 This is just going to keep happening more and more, guys. Q said it again himself, recently: 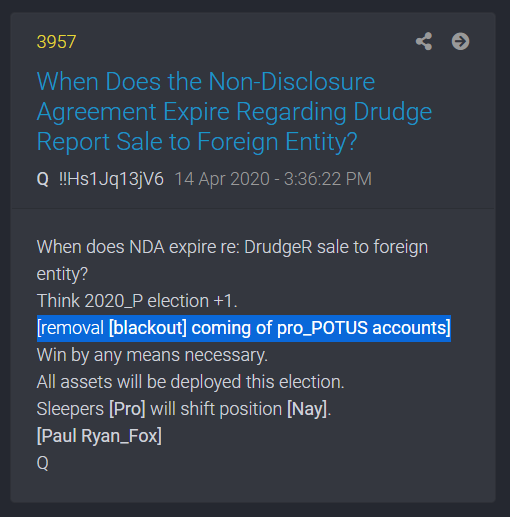 We’re just going to see more and more of /ourguys/ yeeted and deleted from the Cabal-controlled platforms like Twitter, so honestly, I’m going to keep saying what I’ve been saying since the beginning. The only real way to fight this is to have a platform that is completely out of their reach; that is totally beyond their control. Gab has been through the crucible, and come out stronger each time, and the Q-community is only growing there.

I would advise everyone to sign up for Gab if they haven’t already. Some email providers (I believe Yahoo, and sometimes Gmail) censor messages from Gab, so you’re going to have to use a better email provider (like Protonmail or something) to get an account, and give these guys a follow.

You can find links to a bunch of people already established on Gab through my Connect Page.

Okay, on to the article:

There are a number of big questions I have for #QAnon as a result of his three years of posting, some of which I’ve addressed before here on the site. But today, I want to focus in on a recurring line Q has said over, and over, and dive into what I think it may actually portend for the future of this movement. 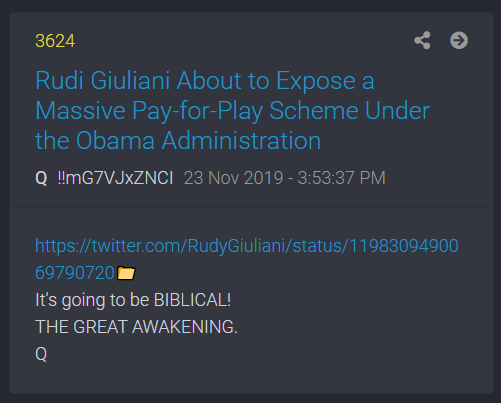 It’s going to be BIBLICAL!

I’ve wondered for a long time what this could possibly mean, in terms of actual, real-world impact. Certainly, we all pretty much know the “Great Awakening” itself is a call back to the four previous “Great Awakenings” in American history; those periods of great Christian revival that swept through the nation. Q himself has, many times, quoted scripture, and also buried in this all is the imagery of “The Storm” – which harkens back to the biblical account of Noah and the first great Deluge.

Likewise, we’ve seen many staggering events in recent times, such as swarms of locust flying across the Middle East, and now, a “plague” of seemingly Biblical proportions in the form of the Corona Virus.

So is Q simply alluding to the size and immensity of the movement, when it reaches its final form?

Surely that’s part of it.

But I don’t think that’s the full story.

And I think if we tug on a particular thread, the full story will begin to better come into focus.

So let’s start with something Q has talked about several times now, beginning with “The Bloodlines.”