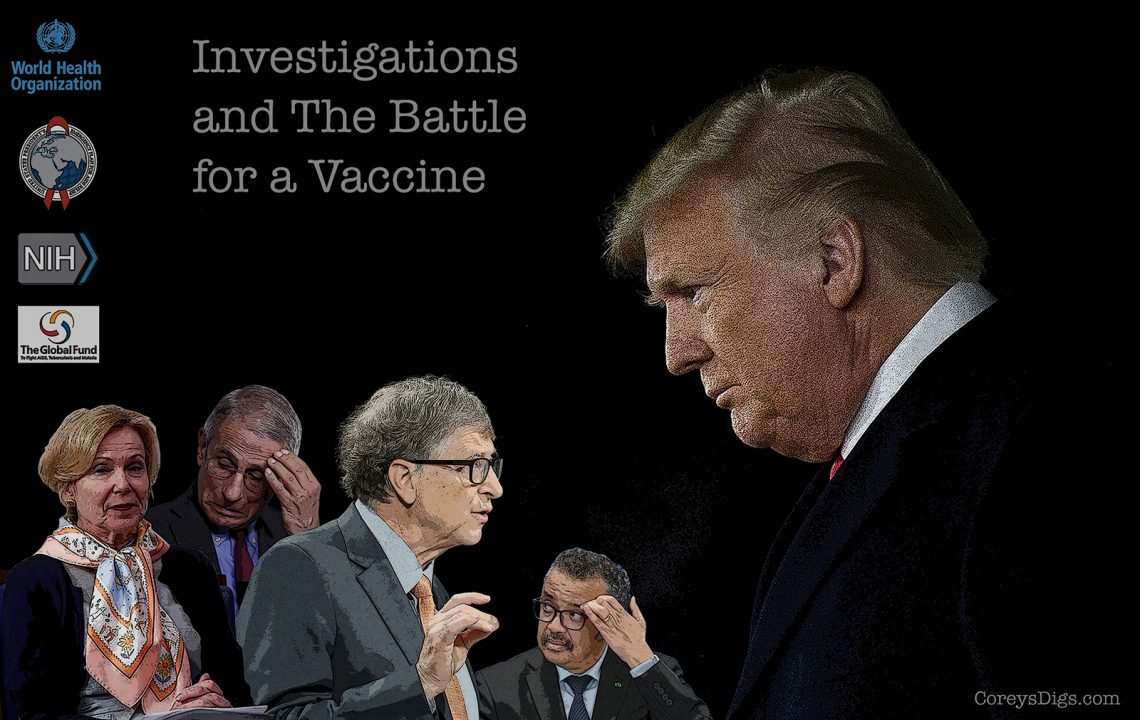 The view from within ones’ home looks much like the apocalypse, as the economy spirals in turmoil while people heed their governor’s orders to “stay home.” Venturing out to the grocery store or for a stroll in nature brings about a surreal feeling of being in the twilight zone as people keep their distance while sporting masks and gloves. They have managed to sink the population into fear and despair, while battling it out over the “cure” for this virus that has swept the nation, or so they say.

It’s hard for most people to see past their fears, their financial situation, and trying to cope in a situation everyone was forced into, not to mention the elevated anger everyone is feeling from freedoms being unnecessarily stripped away. But, this is about much more than a “cure” for COVID-19. There is a shift, a shake-up, and a dismantling taking place before our very eyes. If people realized the background of so many of these nefarious characters, they would understand just how significant this battle is for our healthcare industry, over livelihoods, and the future of mankind.

• PEPFAR is being spotlighted by President Trump, and his feelings on its funding and Africa go back much further than he’s letting on.

• The National Institutes of Health is under investigation with a focus on the $3.7 million given to Wuhan lab in China.

• The World Health Organization has been put on a 60-day funding freeze and is under investigation by the Trump Administration.

• There have been key resignations, reassignments and shake ups with BARDA, USAID and the FDA, and the mainstream news is leaving out some key details.

• President Trump’s team are in a battle against Team Gates and NIH over Hydroxychloroquine and other measures versus a global vaccine, and the timeline is telling.

Some find Trump’s plain and simple language to reflect a lack of intelligence. Those who have studied his strategy know full well that he has the ability to utilize his enemies for the good, spotlight those he needs to, draw the vampires in, and beat them at their own game time and time again. This time, they took it too far, and it would appear that he is looking to dismantle the corrupt healthcare industry from the top down, including potentially pulling out of China when it comes to our pharmaceuticals. Right now, we are witnessing the WHO, PEPFAR, NIH, China, universities, and individuals all lined up on the chopping block. Ultimately, the Global Fund will experience the repercussions, as far as funding goes.

To summarize the timeline below, would leave out some of the most critical data points that reflect this back and forth battle between Team Trump and the Gates Team, in particular, the most significant press conference to date that took place on April 18th. It is broken down in detail in the timeline below because there was so much key information packed into four minutes, that most people probably missed a good portion of his intentions and strategy. His strategy is absolutely brilliant, and that section, among others, is a must read! He told us everything we need to know about who he’s investigating, how they’ve come to this conclusion, who’s involved with these organizations, how he intends to reallocate funds, and how more statements are coming. Not only that, he’s been telling us some of this for years, before he was even President.

Whereas Trump continues to state that they have many people working on a vaccine behind the scenes, his main focus has been on less invasive therapeutics, sharing the fact that heat, humidity and UV light play a big role in killing the virus, and exploring all options of treatment, despite being attacked for this. After all, in what decade has anyone ever witnessed a President pushing for a healthier more cost efficient approach when it comes to people’s health?

As it stands right now, it would appear that the DOJ, FDA, and various laboratories, scientists, medical doctors, some pharma companies, and military are on Team Trump, battling it out with Team Gates which consists of the WHO, NIH, universities, and their own bought off scientists and big pharma. Over the past five months the USAID Administrator resigned and took a position to lead the McCain Institute, BARDA’s director was reassigned and Stephen Hahn was sworn in as the new FDA Commissioner. More details on these events are in the timeline below.

This timeline is not to diagnose the situation of the virus itself, nor is it to delve into the history of these nefarious characters, though there will be links throughout that highlight some of them. There is a multi-layer battle taking place, but this report is focused specifically on the battle for a vaccine and investigations involving the healthcare industry, because that is a big part of their end game. This timeline could have been far more extensive, but is limited to some of the most important events to show the main scope of what is transpiring.

This has been a sticking point for many people who are either taking this as concrete evidence that Trump is cleaning up the vaccine industry, or that he is all for the vaccine industry. To clear a few things up, Trump has always stated that he is not anti-vaccines, BUT he believes too many vaccines are being pumped into babies at such a young age and they need to be spread out. He has also always shown concern over whether autism is caused by vaccines. Key takeaways from this executive order are; to improve the speed and efficiency of production, improve their effectiveness, and created a task force to identify policy priorities and monitor progress. Does this mean that Trump is all for a COVID-19 vaccine? Keep reading.

2-10-20
USAID committed $1.16 billion to Bill Gates’ GAVI over fiscal years 2020-2023, which includes the annual $290 million already in the 2021 budget. This is for purposes of GAVI to immunize 300 million additional children by 2025, and to bolster support by other governments to donate to GAVI. This does not even mention COVID-19, but rather focuses on other diseases, and to stockpile vaccines.

This additional funding came while Mark Green was the Administrator of USAID. He was tapped by Trump in 2017, and announced his resignation on March 16, 2020. Green spoke very highly of GAVI. On April 16, 2020 Mark Green was named the Executive Director of the McCain Institute.

3-13-20
President Trump declared a national emergency, and the same day Bill Gates announced he was stepping down from Microsoft’s board of directors, likely to put all of his efforts into a vaccine.

3-19-20
Bill Gates published ’31 questions and answers about COVID-19’ on his Gates Notes blog. He stated, “Eventually we will have some digital certificates to show who has recovered or been tested recently or when we have a vaccine who has received it.” This created quite a stir due to Gates’ ID2020 he’s been working on, a Microsoft patent, and his control over the healthcare industry. Many believe Bill Gates wishes to chip people to accomplish this, and it’s not a far stretch given his history, projects, and goals.

3-21-20
President Trump began pushing for Hydroxychloroquine in mid-March. It should be noted that on May 30, 2018 the ‘Right to Try Act’ was signed into law, which allows for patients who have been diagnosed with life-threatening diseases, who are unable to participate in clinical trials, to access certain unapproved treatments. Of course, this likely wouldn’t play a role with Hydroxychloroquine since the FDA and DOJ have taken steps to ensure people with COVID-19 have access to it, despite the many characters attempting to discredit it, and running their own trials to provide bogus studies.