Everyone’s life is upside down right now. Life as we were accustomed, is grotesquely distorted. Tuesday it was my younger son’s time to run into the effects of this Corona virus lock down. He was laid off from his job.

He worked in an Infinity car dealership, as a budding technician. He really enjoyed his job. But, instead of servicing 30 – 40 cars a day, they’re down to 7. 8. So, they had to make some cuts. He understands it. He was surprised they kept him on last week as the numbers dwindled.

This is being played out in not hundreds or thousands, but MILLIONS of families across our nation. Every day that this shut down goes on, more stories like my son will continue to emerge.

So, many people are questioning the push for this extended shut down, when the seasonal flu kills so many people every year. It’s a good question, because in any normal year, the flu kills between 30 and 60 thousand people. If we don’t shut down the entire nation over that, why such a response to this?

There’s a lot of theories. One of course is that the globalists ordered the world to be shut down, to crash economies, and have so many more people totally dependent on Government. Then there’s those who believe that the virus was released to scare the hell out of everyone, and then those very people that let it loose, will make trillions off of the “mandatory” vaccine they’ll certainly introduce. Then of course here in the states, there’s no shortage of people who think that the left ( including our traitorous main stream media) wants the economy to crash, so they can blame it all on Trump.

I don’t have an issue believing any or all of those theories. But I do think that there’s a twist to this situation. This is NOT the flu. This was an engineered bioweapon. Don’t roll your eyes, don’t think it’s conspiracy. The conspiracy was them trying to have us believe some old hag eating bat soup was the start of this. If you happen to catch the “bad” version of this bug, your life is most seriously in danger. You’re going to be sicker than you ever have, and in the worst cases you will suffocate in agony and die.

That is why this shut down is such a conundrum. This bug was designed years and years ago. It shares many attributes of SARS. But with previous bioweapons like SARS, or MERS or even Ebola, they couldn’t make it contagious enough. This puppy is a different animal.

Remember back in the early reporting of this bug, some researchers said they discovered what appeared to be HIV virus encoded into it? I mentioned it in one or two of my letters. Anyway, those reports were very quickly yanked, and any of the ones you do find, are labeled “retracted.” But, when the entire world is sick, there’s hundreds of thousands of researchers, trying to figure this thing out. What they’re finding is scary.

Here is the original abstract.

If you read it you come away stunned. They found 4 insertions in this virus that exist in NO OTHER Corona virus. Let just post their conclusion:

Our analysis of the spike glycoprotein of 2019-nCoV revealed several interesting findings: First, we identified 4 unique inserts in the 2019-nCoV spike glycoprotein that are not present in any other coronavirus reported till date. To our surprise, all the 4 inserts in the 2019-nCoV mapped to the short segments of amino acids in the HIV-1 gp120 and Gag among all annotated virus proteins in the NCBI database.

This uncanny similarity of novel inserts in the 2019- nCoV spike protein to HIV-1 gp120 and Gag is unlikely to be fortuitous. Further, 3D modelling suggests that atleast 3 of the unique inserts which are non-contiguous in the primary protein sequence of the 2019-nCoV spike glycoprotein converge to constitute the key components of the receptor binding site.

Of note, all the 4 inserts have pI values of around 10 that may facilitate virus-host interactions. Taken together, our findings suggest unconventional evolution of 2019-nCoV that warrants further investigation.

You’ve heard that the damned thing can incubate inside you for up to two weeks, and you have NO symptoms. Yet during that time, you can infect other people. Then, when it “hits” you, it’s FAST. Why does it hit so hard and so fast? Because your body didn’t know it was infected. It was undetected by your immune system, while all the time the virus was infecting your cells and replicating.

The key here is that “layer” around the corona virus. This virus was designed to create a covering layer around the “spikes” of the virus. Your immune system has seen corona viruses a million times. The common cold is a corona virus. All it needs to do is discover these things with spikes on it floating in your system, and it goes to work trying to kill it.

This virus however, has a twist to it. It creates a layer, very very similar to the HIV protein that envelopes that disease. Your immune system doesn’t recognize it as an invading virus. By the time it finally discovers that there’s something terribly strange going on at the cellular level, the virus has replicated millions of times. You’re overwhelmed.

Which brings us back to this shutdown. What’s the right thing to do here? If the shutdown continues for months, the consequences will be horrific. Destitute people, maybe no food, dying of unrelated health issues, no work, debts piling up, utilities shut off, and on and on.

Yet every day the amount of people found with the infection rises. Every day the death toll climbs. We don’t really have any clue as to how many people have this, but show no symptoms. So people are torn over this. No one wants to get this thing, but no one wants to be destitute. They need to go to work, but they know that they could get sick.

So they’re going to clamor for a vaccine. Could it be that was the key to this entire thing? It could. And, if you remember I wrote about ID 2020, and even one of the past Fed heads are saying that people should wear “badges” to prove they’ve been vaccinated.

A vaccine is coming, no doubt. But can we wait that long? How much damage will there be by then? So we’re in a helluva pickle here. If Trump just threw the switch and said “Everyone’s open, get back to business” you know he’d be blamed for “genocide” and they’d remove him as being mentally deficient. But if he keeps pushing it out, like NJ just did Tuesday, more and more lives are going to be wrecked.

Which one is worse? The possibility of getting a virus that could kill you, especially if you have comorbidities, or … have your life savings wiped out, your home foreclosed, your car repossessed, your kids college dreams crushed, and living on welfare? 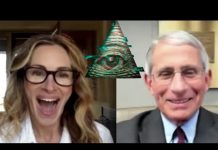 PASS ME A VOMIT BAG! CELEBRITIES ARE REVEALING THEIR AGENDAS TO THE PUBLIC…