This article asserts that infinite money-printing is set to destroy fiat currencies far quicker than might be generally thought. This final act of monetary destruction follows a 98% loss of purchasing power for dollars since the London gold pool failed. And now the Fed and other major central banks are committing to an accelerated, infinite monetary debasement to underwrite their entire private sectors and their governments’ spending, to prop up bond markets and therefore all financial asset prices.

It repeats the mistakes of John Law in France three hundred years ago almost to the letter, but this time on a global scale. History, economic theory and even common sense tell us governments and their central banks will rapidly destroy their currencies. So that we can see how to protect ourselves from this monetary madness, we dig into history for guidance to see who benefited from the Austrian and German hyperinflations of 1922-23, and how fortunes were made and lost.

The way inflation is commonly presented by modern economists, as a rise in the general level of prices, is incorrect. The classical, pre-Keynesian definition is that inflation is an increase in the quantity of money which can be expected to be reflected in higher prices. For consistency and to understand the theory of money and credit we must adhere strictly to the proper definition. The effect on prices is one of a number of consequences, and is not inflation.

The effect of an increase in the quantity of money and credit in circulation on prices is dependent on the aggregate human response. In a nation of savers, an increase in the money quantity is likely to add to savers’ bank balances instead of it all being spent, in which case the route to circulation favours lending for the purpose of industrial investment. Product innovation, more efficient production and competitive prices result; and a price countertrend is introduced, whereby many prices will tend to fall, despite the increase in the money-quantity.

We see this effect in electronic and other goods emanating from savings-driven economies in East Asia, notably Japan and China. But in economies where savings have been discouraged, particularly in America and the UK, there is less investment in production and a greater emphasis on imported goods. Immediate consumption dominates, and increased quantities of money in consumers’ hands inevitably lead to a rise in the general price level of commonly demanded consumer goods.

In a world-wide fiat currency collapse, different savings characteristics between nations can be expected to lead to variations in the speed and timing of the decline of purchasing power between different currencies. We address this point later in this article and the consequences thereof. But a more immediate difficulty for observers is the habit of unquestionably accepting government measures of the general level of prices and incorrectly calling it inflation.

The general level of prices is one of those economic concepts that cannot be measured. The policy of targeting a general level of prices through broad-based indices such as the CPI is thereby fatally flawed. The fundamental and incorrect assumption behind the concept of a consumer price index is that future demand does not vary from the historic, in other words the economy evenly rotates, and economic progress is banished from our thoughts.

Furthermore, the broader the index, the more that extraneous factors, such as import substitution undermines the statistical concept of indexing domestic consumer prices. Together with the state’s desire to reduce the apparent rate by using methods such as hedonics and product substitution, it explains why a CPI can rise at an average annual rate of just under 2% seemingly in perpetuity, while a more targeted index that focuses on everyday items, such as the Chapwood index comprised of 500 constant items, has returned an approximate 10% annual rate of price inflation for a number of years. And if you remove the distortions introduced by government statisticians over the last forty years as demonstrated by Shadowstats, you get a similar 10% approximation.

What matters more than statistics is the effect on ordinary people. In their lack of knowledge about the consequences of changes in the quantities of money and bank credit, by default they see money as a constant, an objective factor in their transactions, with all the price changes emanating from the goods and services being bought or sold. They put rising prices down to profiteering, and when they fall, particularly for goods where product innovation is a strong influence, it is either explained by cheap foreign labour or just taken for granted. There is no public understanding of how inflation undermines the money side in transactions, nor, for that matter, how inflation transfers real savings and earning power from the individual to the state, which is the unstated objective of modern monetary policies.

It is ignorance of the role of money in this regard that permits governments to finance a significant and growing portion of their spending without resorting to unpopular taxation. Government debt issuance, which masquerades as a promise to repay the money borrowed, is mostly inflationary, sourced through monetary and bank credit expansion, that is when savers do not increase their savings. And in the desire to promote current consumption, American and British nationals in particular have been encouraged to spend all their income on consumer goods instead of adding to their savings.

The recycling of capital from trade deficits into government and other securities is inflationary as well. When foreign businesses in the import trade or their governments buy a state’s government debt, the origin of their currency purchased can almost always be traced back to domestic credit expansion. American trade deficits since 1992, having accumulated to $12 trillion matches foreign ownership of the sum of US Treasuries, asset-backed securities and short-term debt almost precisely.[i]

Given proclamations by central bankers that they are about to hyperinflate, ignorance of monetary matters becomes an expensive condition. When trying to understand money, credit and how they flow, the vast majority of people find themselves in an Alice in Wonderland confusion where nothing makes sense. They are setting themselves up to lose everything they possess.

The first phase of inflation is ending

For most people the persuasive argument is empirical evidence, assuming they are prepared to look for it. We all understand that over time, our dollars, pounds and euros buy less. But despite the evidence, almost no one is really aware of the extent their fiat currencies have declined. 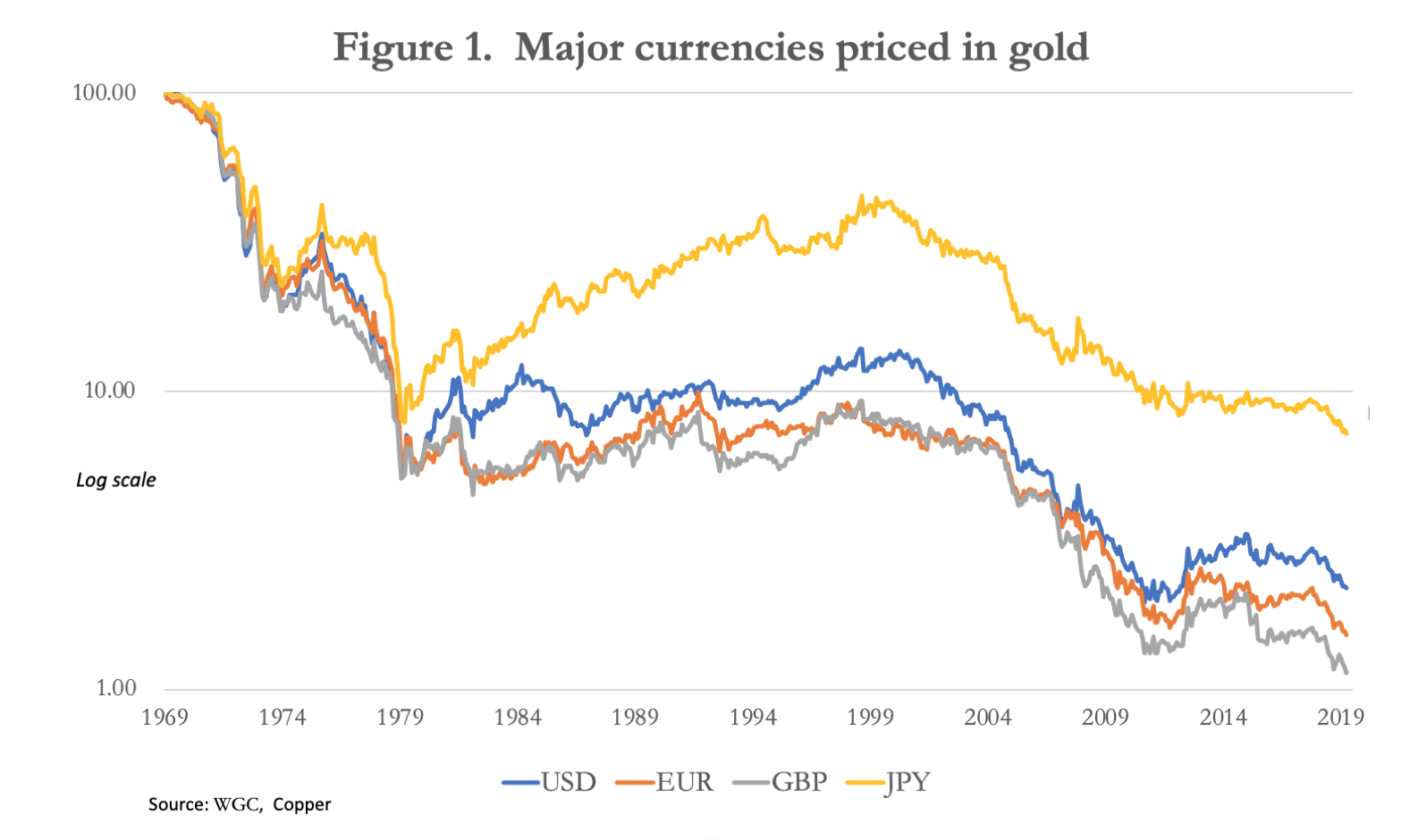 I make no apologies for having used the chart in Figure 1 before, but it is necessary to ram the point home. Since the dollar was devalued from $35 in the late 1960s, measured against gold the dollar has retained only 2.2% of its 1969 purchasing power. Admittedly, one would expect gold’s purchasing power to gently rise over time, which has been the experience under gold standards, exaggerating the dollar’s decline.