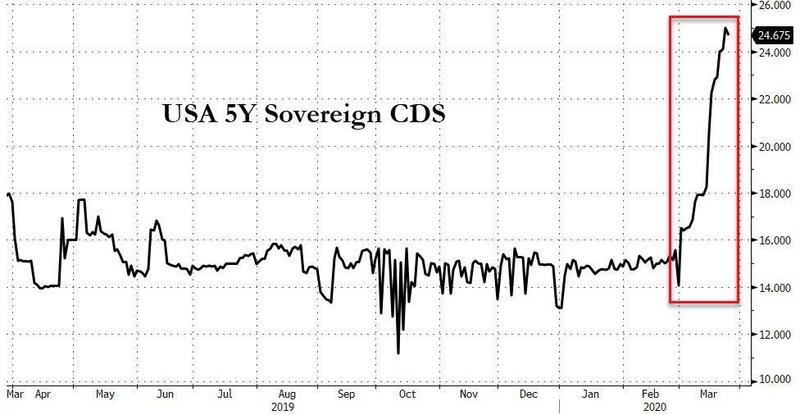 When the Senate unanimously passed a $2 trillion economic rescue plan late last night, it was targeting tens of millions of middle-class American households many of whom had lost their jobs, and whose lives had ground to a halt due to the global coronavirus pandemic and lockdown. It certainly wasn’t targeting Wall Street bankers.

Naturally, the Congressional stimulus plan which is set for House passage tomorrow, received much publicity – after all, some of those trillions in stimulus payments will end up going into the pockets of America’s workers, and while the final amount is a modest $1,200 per month, both Democrats and Republicans – and the President of course – will take full credit for the handout (while blaming each other for the far bigger corporate bailouts that are at the core of the package).

What has received far less coverage is that to fund this plan, the Treasury will have to issue trillions and trillions in new debt, much of which will be quickly monetized by the Fed (whose balance sheet is now $5.5 trillion and exploding), in what is essentially the arrival of helicopter money in the United States. As a result of the ongoing panic among capital markets participants who are scrambling to respond to this tsunami of new debt, there has been a surge in demand for cash and cash-equivalent products, including gold – which as we discussed earlier this week can not be found at virtually any merchant at a price remotely close to spot – and short-term Treasury Bills, those maturing in 3 months or less.

In fact, so intense is the scramble for near-term Bills that they are all now trading with a negative yield all the way to the 3 month mark, and in some cases, further out.

It is this unexpected drop in hundreds of billions in US Treasury Bills into the monetary twilight zone of negative interest rates that represents a far more secretive if far more generous handout amounting to millions in virtually guaranteed handouts to Wall Street’s bond traders.

But wait, the US doesn’t have negative yields, at least not yet, so why are Bills trading below zero. There are several answers, but the key one is traders’ preference to park cash not in their bank – which suddenly may have the dreaded “counterparty risk” thanks to some $40 billion in borrowings on the Fed’s Discount Window…

… but in the safety of debt instruments backstopped by Uncle Sam. After all, if the US were to default, which judging by the recent surge in US CDS is something quite a few are considering….

… investors would have far bigger problems than withdrawing their money.

And it is here that a fantastically profitable arbitrage has emerged, one which is far more generous to Wall Street bond traders than the fiscal bailout is to the middle class, as it is literally handing out billions in risk-free money to pretty much anyone who figures it out.

You see, unlike Germany, Switzerland or Japan, the US Treasury is prohibited from issuing debt with negative yields. Why? There is no one specific reason, but as Bloomberg, which first noticed this arb, points out “one reason the government might not want to allow negative-rate bidding is that it risks signaling to investors that negative rates are here to stay. Of course, since it is only a matter of time now before the Fed follows the ECB, BOJ and SNB by sinking into NIRP, this arb may soon disappear, but for now read on.