A number of prominent doctors and scientists have shared their criticisms in peer-reviewed publications for quite some time. These opinions are obviously not promoted at all, and anybody who makes such criticisms of the “medical establishment” is usually vilified. In the past, it took a lot of bravery to say what you really felt if it was a perspective that ‘went against the grain.’ Today, it seems to be easier for health professionals to do so given the fact that so many have done it in the past and more are continuing to do it.

I’ve written about this before, using multiple examples. Dr. Marcia Angell, physician and longtime Editor-in-Chief of the New England Medical Journal (NEMJ), said that “it is simply no longer possible to believe much of the clinical research that is published, or to rely on the judgment of trusted physicians or authoritative medical guidelines. I take no pleasure in this conclusion, which I reached slowly and reluctantly over my two decades as an editor of The New England Journal of Medicine.”  (source)

Arnold Seymour Relman (1923-2014), a Harvard professor of medicine and also a former Editor-in-Chief of NEMJ, was frustrated that “the medical profession is being bought by the pharmaceutical industry, not only in terms of the practice of medicine, but also in terms of teaching and research. The academic institutions of this country are allowing themselves to be the paid agents of the pharmaceutical industry. I think it’s disgraceful.” (source)

The list of papers that dive into the corruption and what seems to be the modern day politicization of science is long.

“Even the pharmaceutical companies have been able to purchase congress. They’re the largest lobbying entity in Washington D.C.. They have more lobbyists in Washington D.C. than there are congressman and senators combined. They give twice to congress what the next largest lobbying entity is, which is oil and gas… Imagine the power they exercise over both republicans and democrats. They’ve captured them (our regulatory agencies) and turned them into sock puppets. They’ve compromised the press… and they destroy the publications that publish real science.” – Robert F. Kennedy Jr. (source)

The latest paper I came across expressing the same thing was published in 2016 by Dr. Mahin Khatami, who is a former program director at the National Cancer Institute (NCI) and National Institutes of Health (NIH). This particular paper of hers, titled “Safety concerns and hidden agenda behind HPV vaccines: another generation of drug-dependent society,” was published in Clinical and Translational Medicine. (PMC5138175)

“The establishment is entitled to glamorize and publicize too many drugs or vaccines with little/no ethical or safety considerations for short, or long-term health hazards of such projects… Majority of vaccines that were designed to prevent diseases caused more death and diseases than public exposures to infective agents. Policy makers and the public should take a closer look at the long-lasting ‘medical/scientific ponzi schemes’ that the cancer establishment created to control a drug-dependent sick society.”

She states quite clearly in her introduction that the purpose of modern day healthcare, according to her, is as follows:

“Formation of a highly ordered and sophisticated medical hierarchy (establishment) in the nineteenth/twentieth century within higher education institutions (e.g., medical schools, organizations) was supported by businessmen and philanthropists with motives to profit from the sale of drugs.”

Is there any truth to what she is saying, or any corroborating research other than the sources she uses in her paper? Let’s take a look at her statement that “too any vaccines with little/no ethical or safety considerations” are being pushed on the population. When it comes to the HPV vaccine, “sixty-nine cancer centers urged HPV vaccination and thus-far, 80 million doses of HPV vaccines ($200–260/ dose) consumed by healthy public” in the United States. I’ll let you do the math. (source)

A new study published in The Royal Society of Medicine is one of multiple studies over the years that has emerged, questioning the efficacy of the HPV vaccine. The researchers conducted an appraisal of published phase 2 and 3 efficacy trials in relation to the prevention of cervical cancer and their analysis showed “the trials themselves generated significant uncertainties undermining claims of efficacy” in the data they used. The researchers emphasized that “it is still uncertain whether human papillomavirus (HPV) vaccination prevents cervical cancer as trials were not designed to detect this outcome, which takes decades to develop.”  The researchers point out that the trials used to test the vaccine may have “overestimated” the efficacy of the vaccine.

A study published in 2013 in Current Pharmaceutical Design carried out a review of HPV vaccine pre- and post-licensure trials to assess the evidence of their effectiveness and safety. They found that, 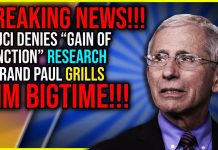