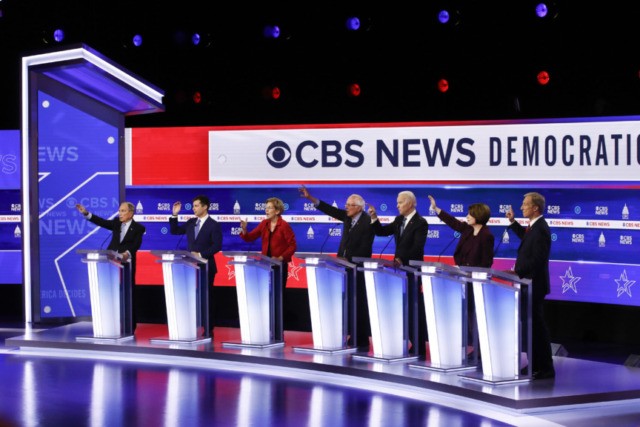 The Democratic National Committee (DNC) is changing its debate format to limit the rigorous standing required by candidates, at a time when there is renewed scrutiny over former Vice President Joe Biden’s fitness for the White House.

The DNC announced on Friday that the format for its next debate, to be held in Arizona on March 15, would have the candidates seated behind a desk, fielding questions from the audience. The format change, which was first reported by Politico, would be a departure from the past ten debates, where candidates stood behind lecterns and faced questions from moderators.

“After ten debates, the DNC worked with its network partners to adapt the March debate to the smaller field of candidates and to give voters more of a voice,” a DNC spokeswoman said in announcing the new format.

The change occurs as the Democrat field has winnowed, leaving Biden and Sen. Bernie Sanders (I-VT) as the only two viable candidates for the nomination. That process, which saw establishment Democrats consolidate behind the former vice president ahead of Super Tuesday, has left many Sanders supporters feeling as though the primary is being manipulated to thwart their candidate. Sanders, himself, granted credence to such thinking during a weekend appearance on ABC’s This Week.

Sanders said, while discussing machinations that led to Sen. Amy Klobuchar (D-MN) and Pete Buttigieg to dropping out and backing the former vice president:

Given such feelings, it is no surprise that many on the left believe the DNC’s debate format change is meant to benefit Biden—a claim the former vice president’s team denies. The sentiment was best summed up by Glenn Greenwald, who took to social media shortly after the new format was announced to lambast what he saw as a transparent effort by the DNC to “protect” the former vice president.

“What is Biden going to do if he’s the nominee and he doesn’t have the rotted DNC to protect him by corruptly changing the rules that let him basically lounge around in a bed taking questions from nice people instead of having to stand on his feet and directly debate,” Greenwald wrote.