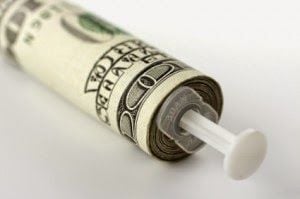 A few days ago, Dr. Tedros, the Director General of the World Health Organization (WHO) repeated what he said already a few weeks ago, that there are about 20 pharmaceutical laboratories throughout the world that are developing a vaccine for the novel coronavirus, named COVID-19, also called 2019-nCOV, or SARS-CoV-2. For the layman, it is just a stronger mutation of the Severe Acute Respiratory Syndrome (SARS) virus, that broke out in 2002 / 2003, also in China. To be sure, a mutation made in a laboratory. In a US high-security biological warfare laboratory. In other words, both SARS and COVID-19 – among many other bio-war agents – were made in the US.

And now, the chaotic western-style race of private corporations for a vaccine wanting to outdo one another, has begun.

Who is first to develop a vaccine? – It’s a fierce competition to establish a patent, a monopoly – for a possibly multi trillion-dollar business. Its western neoliberal capitalism at its very worst – or best, depending on the angle from where one looks.

There are no words to describe this chaotic fever for profit over human wellbeing. It has nothing to do with health, with healing sick and suffering, possibly dying people. It’s all about money. Hundreds of billions, if not trillion of profit for the pharmaceutical oligarch and their associated research laboratories and enterprises. And even more so, if the WHO-declared “pandemic” (sic) will prompt a forced vaccination campaign, enhanced by military and police surveillance.

Let’s put COVID-19 in context. As of 23 March 2020 (18:33 GMT), and according to WHO statistics, reported worldwide cases are 372,572; deaths 16,313; recovered 101,373 – a death rate of 4.37%. However, these figures must be considered with caution. In many countries, especially developing economies, accurate testing may be a problem. Test kits are often not available, or not reliable. So, may people who go to the doctor with some flu symptoms are possibly falsely diagnosed as COVID-19 victims, as it serves the publicity hype.

Miscalculations and false reporting may even occur in the United States. Mr. Robert Redfield, CEO of the US Center for Disease Control (CDC), testified before Congress that CDC does no longer carry out regular tests, that these were carried out at State-level and only in extreme cases. See also this reference form the LA Times of California measures and directives.

By comparison, the US CDC estimates that in the 2019 / 2020 flu season in the US alone, some 38 to 54 million people may catch the common flu, and 23,000 to 59,000 may die from it. The vast majority of these deaths will be elderly people above 70-years of age and many of them with pre-health conditions and /or pre-existing respiratory problems. This is pretty much the same disease and death pattern as with COVID-19. Expanding these common flu figures linearly on a worldwide scale would result in hundreds of thousands of flu deaths. In the particularly strong 2017-2018 US flu season, an estimated 60,000 people died from the flu in the US alone. The reader may himself judge whether WHO was justified declaring COVID-19 a “pandemic” — or whether there may have been – just perhaps – another agenda behind it?

The vaccine that might eventually be applied to COVID-19, may most likely no longer be valid for the next coronavirus outbreak – which, also according to Mr. Redfield, CDC, will most probably occur. A later virus may most certainly have mutated. It’s quite similar to the common flu virus. In fact, the annually reoccurring common flu virus contains a proportion of 10% to 15% (some times more) of coronaviruses.

The effectiveness of the annual flu vaccines is on average less than 50%, not to mention all the potential harmful side effects, they carry along. COVID-19 is very similar to influenza. Will a corona virus vaccine be equally weak in protecting a potential patient from a future infection?

Cooperation instead of competition, doesn’t occur in the west. It’s all profit-driven. With a number of different vaccines from different pharma giants coming on the market, who will tell the patient which one is the best, most suitable for the patient’s condition? It smells like an utter chaotic scam.

The real question is – are vaccines – or a vaccine – even necessary?  Maybe – maybe not. The production of vaccines is pushed for profit motives and for an important political agenda for a New World Order – that has been planned to change human life as we know it, or thought we knew it. See further explanations below.

Vaccines don’t heal, they may prevent the virus from hitting as hard as it might otherwise do, or not at all, depending on the age, physical and health condition of a person. Worldwide statistics show that usually a person up to the age of 40 or 50, who is infected by the COVID-19, has none or only slight symptoms, nothing to worry about.

Should symptoms show up, staying home, resting and using traditional, age-old medicine, the same that might be used for the common flu, might be enough to get rid of the virus. This might resolve the disease within one or two weeks. Then, the person will be naturally “vaccinated” against this strand of coronavirus. Elderly people above 65 or 70 may be more at risk and special attention may be in order – separated from crowds, isolation during a two-week quarantine (the incubation period), while the rest of society goes on with life as normal as possible, thereby reducing the huge cost to society.