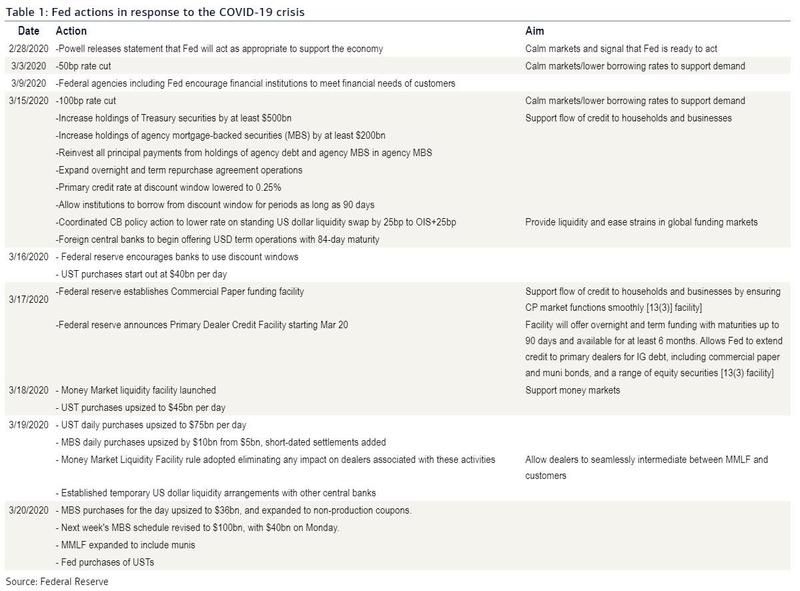 Last Sunday, when the Fed threw what appeared to be the kitchen sink at crashing markets, cutting rates to 0%, unveiling a $700BN QE (since expanded to include another $100BN in MBS), and enhancing G-5 central bank FX swap lines (since expanded to include numerous non-G5 banks), many wondered why the Fed withheld the one instrument considered critical in restoring market stability, preventing the commercial paper market from seizing up and preventing mutual fund runs, namely a commercial paper backstop facility. Then, just 48 hours later, the Fed did just that as stocks continue to plunge, and even though the Fed has since unveiled even more Lehman-era anti crisis measures, it has now become apparent that merely redoing what the Fed did in 2008 won’t be enough. Trying to one-up itself, and reverse the market panic, on Friday morning the Fed also announced a municipal bond bailout by including munis to the MMLF, yet even that was not sufficient to prevent stocks from crashing on quad-witching Friday.

So here we are late on Sunday night, with S&P futures just shy of limit down, waiting for Congress to pass a massive multi-trillion bailout legislation with Democrats and Republicans putting on a good show of sticking to their ideological talking points and roadblocking the bill’s passage even though everyone knows it will pass, the only question is how much more pain will markets take before this too shall pass.

And yet, to some – such as Bank of America which was most vocal in demanding a commercial paper facility last weekend (which now seems like years ago) – not even a massive bailout package passed by Congress, one that would grant the Fed de facto powers to buy corporate bonds, will be enough.

Instead, as BofA’s rates strategist Marc Cabana writes, there is “growing potential for the Fed to step up its already impressive policy response as lender of last resort.” Specifically, in the coming days and weeks BofA sees a growing likelihood of:

In short, BofA agrees with Zoltan Pozsar, who last week once again assessed the damage and said that the Fed will effectively have to backstop everyone and everything, in declaring a virtually total takeover of capital markets by the Fed, which is now in critical triage mode, designed to prevent further asset losses which from this point on, would have dire social and perhaps civilizations implications, potentially even the civil war that Time Magazine one mocked us for predicting  back in 2010 when we said that the Fed has put the US on collision course with armed social conflict.

And so, with days, if not hours left for capital markets them before the Federal Reserve effectively takes over all risk assets, here is BofA’s note urging the Fed to go all the way, which we deem is a fitting eulogy for the free markets and capitalism.

Without further ado, here is Marc Cabana’s note explaining why “Bolder Fed Action is Likely”, by which he means the total takover of capital markets by a group of academics who have never even held a real job in their lives:

What has started out as a health care crisis has quickly spiraled into an economic one and risks quickly becoming a housing/financial crisis. The Federal Reserve has sounded the battle cry, with Chair Powell’s guidance to “act as appropriate” followed by an emergency 50bp rate cut on 3 March 2020. This has been followed by quick action to meet the market’s most immediate needs, in a series of steps detailed in Table 1. Scheduled asset purchases have been significantly upsized as the week progressed to stem market volatility and contain the impact of deteriorating market liquidity and forced selling.

To keep the situation from escalating further, and avoid the continued haphazard upsizing of daily QE purchases, we believe the Fed put needs to be made explicit, unlimited in quantity, and with a well-defined strike. To that end further “war-time” measures are needed. We believe it is time for the Fed to unleash its full arsenal to prevent these conditions worsening. We think it possible the Fed takes several additional measures in coming days or weeks, including:

Federal Reserve undertakes Yield Curve Control (YCC) by defining yield targets across the UST curve, standing ready to buy in unlimited quantities of Treasuries at those yields irrespective of settle date or off-the-run status. This can support the coming record fiscal stimulus too, although communication would need to be clear to ensure dollar reserve status is not jeopardized. We think such as measure would be very effective at reducing current Treasury illiquidity and would like only need to be temporary in nature

Yield targets can change over time, and the Fed would need to be sensitive to any breakeven inflation widening as signal over debt monetization controls. Fed YCC can be scaled back gradually as the markets stabilize and, we believe, will ultimately result in a smaller Fed balance sheet than the current policy. We discuss the historical precedent for this during WW2, rationale for YCC today, implementation criteria, and considerations.

Eliminate limits on Agency MBS daily purchase amount, and instead lock in MBS basis versus the yield target defined under YCC. For example the Fed could offer to buy each TBA daily at a fixed price in unlimited quantity. Prices would be published daily, with initial levels set to a reasonably wide spread, for example spot. The Fed would stand ready to buy for all settlement dates, using rolls to carry adjust as needed.

So why exactly would we need markets at this point?