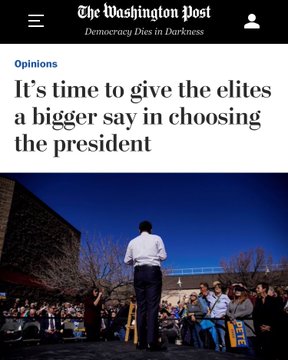 The Washington Post is taking heat over a Tuesday op-ed authored by Marquette University political science professor Julia Azari, titled “It’s time to give the elites a bigger say in choosing the president.”

Azari argues that the Democratic party’s primary process is overly-complicated and convoluted, and the process of choosing the nominee should instead be placed in the hands of politicians instead.

After outrage ensued, the Post changed the headline to the far less inflammatory “It’s time to switch to preference primaries.”

There’s a reason I take screenshots.

The illustrious Washington Post changed its headline after too many peasants made fun of it. pic.twitter.com/yeqgbHa0Ve

The current process is clearly flawed, but what would be better? … A better primary system would empower elites to bargain and make decisions, instructed by voters.

One lesson from the 2020 and 2016 election cycles is that a lot of candidates, many of whom are highly qualified and attract substantial followings, will inevitably enter the race. The system as it works now — with a long informal primary, lots of attention to early contests and sequential primary season that unfolds over several months — is great at testing candidates to see whether they have the skills to run for president. What it’s not great at is choosing among the many candidates who clear that bar, or bringing their different ideological factions together, or reconciling competing priorities. A process in which intermediate representatives — elected delegates who understand the priorities of their constituents — can bargain without being bound to specific candidates might actually produce nominees that better reflect what voters want.

Instead of primaries in which caucuses are held to pick primary delegates, Azari suggests that the parties should use “preference primaries” which would “allow voters to rank their choices among candidates, as well as to register opinions about their issue priorities.”

This would allow the ‘elites’ to choose a nominee based on what the voters want – a strategy Azari admitted is “labor-intensive and a little risky,” according to Breitbart.