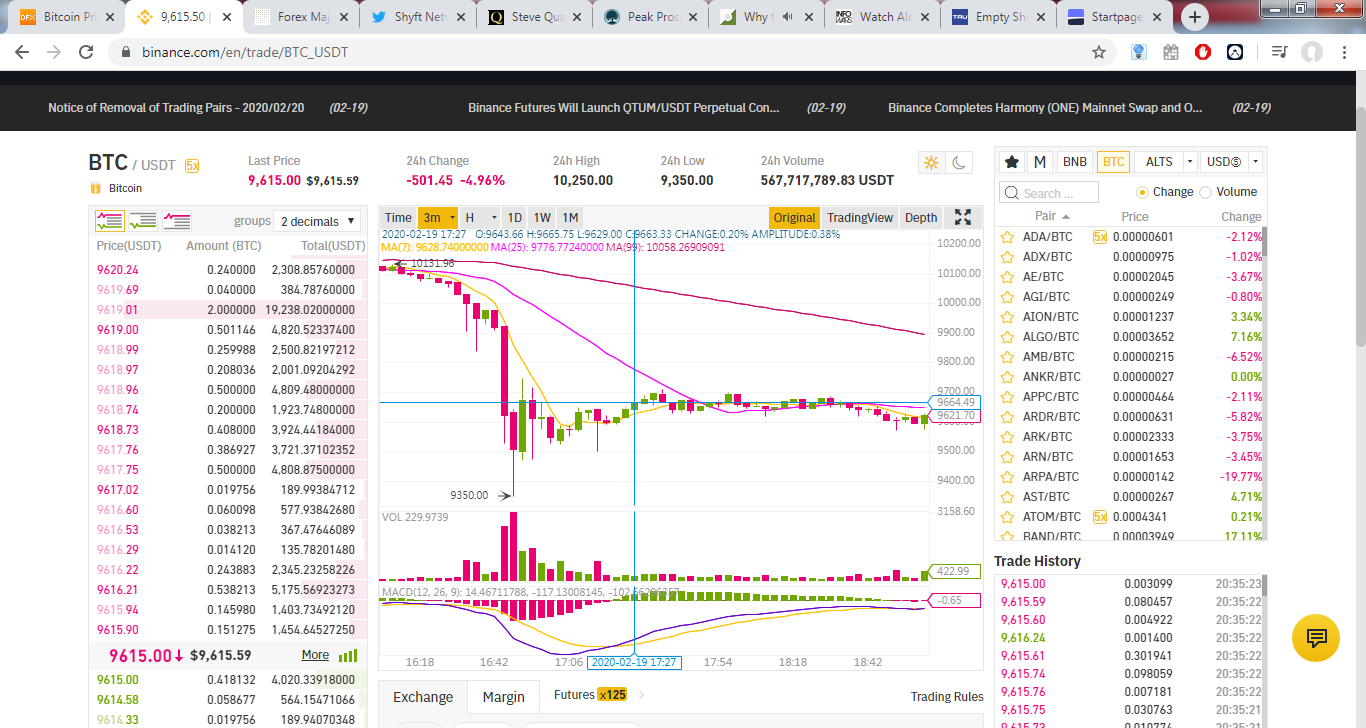 Welcome to Wall Street and the world of high finance everyone! A place where dreams are shattered and hopes are “hookered”. Yesterday was Wednesday, February 19, 2020. Yesterday afternoon, at 4:47 pm, the price of bitcoin [was assassinated] dropped 600 dollars [5.6 %] in 5 minutes. Here’s what that looks like on bar chart [3 minute intervals]:

For those of you who might not understand the gravity of transpired here, imagine the DOW Jones Industrial average dropping by 1,650 points in 5 minutes commencing 13 minutes before the market closes at 4:00 pm eastern time.  If that were to happen, there would be investigations.  There would be questions put to regulators.  Answers would be DEMANDED from regulators.

I was sitting at my desk yesterday afternoon and I picked up the phone at 4:45 pm eastern time.  I talked on the phone for less than 10 minutes and when I put the phone down and looked at my computer screen – I thought I was looking at a misprint.  I mean, what could have possibly happened?  The drop was so RUDE it moved me to first think, “it must be an attack on bitcoin futures in Chicago”.  I actually wrote to the Chicago Mercantile Exchange to query them.  When daily trade data was published later on Wednesday evening I realized the ambush did not originate in Chicago.

It wasn’t until later in the evening sharing thought with fellow writers in an “email loop” which I belong to that the SOURCE became known when a fellow researcher revealed;

“Over $100 million worth of $BTC longs were liquidated on BitMEX as Bitcoin plunged 5.6% in just five minutes.”

The notion that anyone with a sane mind would dispose of 100 million worth of bitcoin in such a fashion is a dog that does not hunt.  It’s akin to selling 100 dollar bank notes for 90 bucks a piece.  This is what identifies this operation as a direct “INTERVENTION” by officialdom.  Not only that folks, this type of activity is ILLEGAL and in contravention of commodities law.  Of course, few would be aware of this because – in America – regulators don’t [and haven’t for a long time] regulate.  They just persecute whistle blowers.

The reason why officialdom intervenes and crashes the price of bitcoin is the exact same reason they frequently intervene in algorithmically paper driven precious metals markets – in the wake of SEVERE monetary debasement on the part of the Fed and US Treasury’s Exchange Stabilization Fund [ESF] to make dollar alternatives look bad.  The agents for officialdom when it comes to interventions are the usual [some already convicted] suspects – J.P. Morgan, Deutsche Bank, Citibank, MS and Goldman Sachs.

But my fellow researcher said this intervention occurred on an exchange called BitMEX.  So who is BitMEX anyway?  Since they are involved in criminal activity I figured they deserved a much bigger audience or a billboard/monument to celebrate their handiwork.

After graduating with a degree in economics from the Wharton School of Business, Arthur lived in Hong Kong as an equity derivatives trader. He was the market-maker for Deutsche Bank and Citibank’s Exchange Traded Funds (ETF) businesses. He also has extensive experience trading equity index futures, forwards, and swaps as well as non-deliverable FX forwards. Arthur brings a deep understanding of how to structure and trade financial derivatives.

Ben graduated from the University of Oxford with a Masters and First Class Honours in Mathematics and Computer Science. He has over ten years experience developing high-frequency trading systems for companies such as J.P. Morgan and IBM, dealing predominately in KDB+/Q. His expertise covers the design, architecture and implementation of quantitative infrastructure, systems and tools.

In financial parlance, ladies and gentlemen, these guys earned their stripes in the equivalent of the Gambino Crime Family.  Their exchange should be boycotted and these thugs should be sent with their bags packed – back to the filthy wet works wonderland they came from.