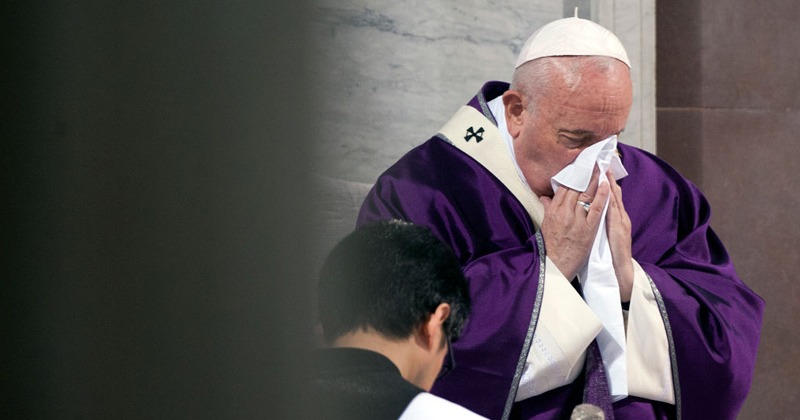 Officials are increasingly getting sick worldwide with COVID-19. The first to start this dangerous new trend was Iranian Deputy Health Minister Iraj Harirchi the head of Iran’s coronavirus task force who revealed Tuesday he tested positive for the illness just one day after appearing visibly sick in a press conference organized to dispel the idea that Iran had been lying about the scale of the outbreak.

Italy is in the midst of a coronavirus outbreak with 14 deaths and over 500 reported cases and towns in lockdown in Northern Italy, the governor of Lombardy, the main region at the center of Italy’s coronavirus outbreak, Attilio Fontana, has placed himself in quarantine yesterday after one of his staff was reported to have contracted the novel coronavirus.

Incredibly, Pope Francis decided on Wednesday to kiss heads and touch faces with crowds in St Peter’s Square in solidarity with those suffering from coronavirus despite warnings from his close advisers to not do so. In the evening, Pope Francis was pictured by the media already coughing and blowing his nose repeatedly during Ash Wednesday Mass, in what seemed a similar episode to that involving Iranian Deputy Health Minister Iraj Harirchi before he was hospitalized. Today, Pope Francis has been forced to cancel a planned Mass in Rome with another clergy after suffering what has been described as a “slight illness” by Vatican officials.

Pope’s idiotic stunt with the crowds in St Peter’s Squarewas not a good idea as he has lost part of one lung as a young man because of respiratory illness, and might risk death if he has COVID-19.  Bergoglio has had a busy schedule lately that might have also helped him to contract the novel coronavirus, including his public general audience yesterday, and the Ash Wednesday service later in the day in a Roman basilica.

If Pope Francis has COVID-19 it will indeed destabilize the Vatican and symbolize the messianic nature of this virus underlined a few weeks ago by noted messianic era expert, scholar, and international speaker Rabbi Mendel Kessin who spoke of the spiritual significance of the coronavirus,  linked with the advancement of the messianic era.

Imagine if Pope Francis suddenly dies leaving Ratzinger in charge. It would be seen by most traditionalist Catholics as a sign of God’s will to save the Church from the anti-Christian ways of the Argentinian Pope.

This article first appeared at LeoZagami.com.