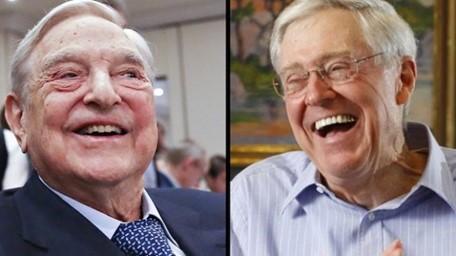 Those hoping the non-interventionist cause would be given some real muscle if a couple of oligarchs who’ve made fortunes from global interventionism team up and pump millions into Washington think tanks will be sorely disappointed by the train wreck that is the Koch/Soros alliance.

The result thus far has not been a tectonic shift in favor of a new direction, with new faces and new ideas, but rather an opportunity for these same old Washington think tanks, now flush with even more money, to re-brand their pet interventionisms as “restraint.”

The flagship of this new alliance, the Quincy Institute for Responsible Statecraft, was sold as an earth-shattering breakthrough – an “odd couple” of “left-wing” Soros and “right-wing” Koch boldly tossing differences aside to join together and “end the endless wars.”

That organization is now up and running and it isn’t pretty.

To begin with, the whole premise is deeply flawed. George Soros is no “left-winger” and Koch is no “right-winger.” It’s false marketing, like the claim that drinking Diet Coke will make you skinny. Both are globalist oligarchs who continue to invest hundreds of millions of dollars to create the kind of world where the elites govern with no accountability except to themselves, and “the interagency,” rather than an elected President of the US, makes US foreign policy.

As libertarian intellectual Tom Woods once famously quipped, “No matter whom you vote for, you always wind up getting John McCain.” That is exactly the world Koch and Soros want. It’s a world of Davos with fangs, not Mainstreet, USA.

Anyone doubting that Quincy is just a mass re-branding effort for the same failed foreign policies of the past two decades need look no further than that organization’s first big public event, a February 26th conference with Foreign Policy Magazine, to explore “A New Vision for America in the World.”

Like pouring old wine into new bottles, this “new vision” is being presented by the very same people and institutions who gave us the “old vision” – you know, the one they pretend to oppose.

How should anyone interested in restraining foreign policy – let alone actual non-interventionism – react to the kick-off presentation of the Quincy Institute’s conference, “Perspective on U.S. Global Leadership in the 21st Century,” going to disgraced US General David Petraeus?

Petraeus is, among many other things, an architect of the disastrous and failed “surge” policy in Iraq. He is still convinced (at least as of a few years ago) that “we won” in Iraq…but that we dare not end the occupation lest we lose what we “won.” How’s that for “restraint”?

While head of the CIA, he teamed up with then-Secretary of State Hillary Clinton to develop and push the brilliant idea of directly and overtly training and equipping al-Qaeda and other jihadists to overthrow the secular government of Bashar Assad. How’s that for “restraint”?

When a tape leaked of Fox News contributor Kathleen T. McFarland meeting with Petraeus at the behest of then-Fox Chairman Roger Ailes to convince him to run for US president, Petraeus told her that the CIA in his view is “a national asset…a treasure.” He then went on to speak favorably of the CIA’s role in Libya.

But the absurdity of leading the conference with such an unreconstructed warmongering interventionist is only the beginning of the trip down the Quincy conference rabbit hole.

Shortly following the disgraced general is a senior official from the German Marshal Fund, Julianne Smith, to give us “A New Vision for America’s Role in the World.” Her organization, readers will recall, is responsible for some of the most egregious warmongering propaganda.

The German Marshal Fund launched and funds the Alliance for Securing Democracy, an organization led by such notable proponents of “restraint” as neoconservative icon William Kristol, John McCain Institute head David Kramer, Michael “Trump is an agent of Putin” Morell, and, among others, the guy who made millions out of scaring the hell out of Americans, former Homeland-Security-chief-turned-airport-scanner-salesman Michael Chertoff.

The Alliance for Securing Democracy was responsible for the discredited “Hamilton 68 Dashboard,” a magic tool they claimed would seek and destroy “Russian bots” in the social media. After the propaganda value of such a farce had been reaped, Alliance fellow Clint Watts admitted the whole thing was bogus.

Moving along, so as not to cherry pick the atrocities in this conference, moderating the section on the Middle East is one “scholar,” Mehdi Hasan, who actually sent a letter to Facebook demanding that the social media company censor more political speech! He has attacked what he calls “free speech fundamentalists.”

Joining the “Regional Spotlight: Asia-Pacific” is Patrick Cronin of the thoroughly – and proudly – neoconservative Hudson Institute. Cronin’s entire professional career consists of position after position at the center of Washington’s various “regime change” factories. From a directorial position at the mis-named US Institute for Peace to “third-ranking position” at the US Agency for International Development to “senior director of the Asia-Pacific Security Program at the [neoconservative] Center for a New American Security.” This is a voice of “restraint”?

Later, the segment on “Ending Endless War” features at least two speakers who absolutely oppose the idea. Rosa Brooks, Senior Fellow at the “liberal interventionist” New America Foundation, wrote not long ago that, “There’s No Such Thing as Peacetime.” In the article she argued the benefits of “abandon[ing] the effort to draw increasingly arbitrary lines between peacetime and wartime and instead focus[ing] on developing institutions and norms capable of protecting rights and rule-of-law values at all times.” In other words, war is endless so man up and get used to it.

This may be the key for how you end endless war. Just stop calling it “war.”

Brooks’ fellow panelist, Tom Wright, hails from the epicenter of liberal interventionism, the Brookings Institution, where he is director of the “Center on the United States and Europe.” Brookings loves “humanitarian interventions” and has published pieces attempting to convince us that the attack on Libya was not a mistake. 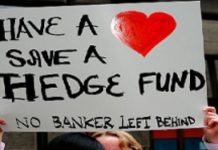