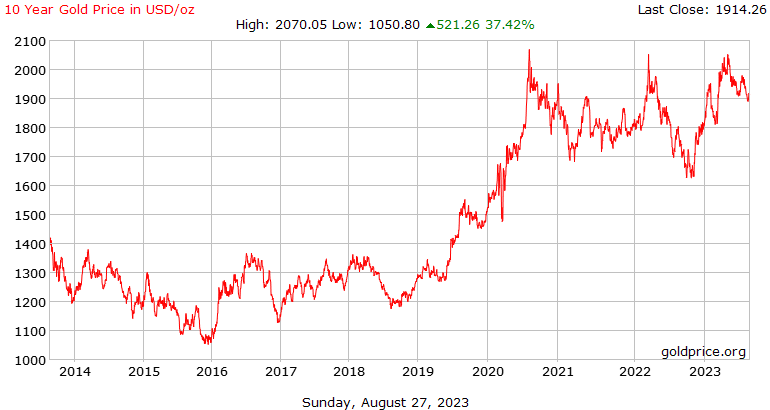 ◆ With no opportunity cost to holding a zero-yield asset such as gold, investors increasingly are adding it to their portfolios as a hedge.

◆ Gold retains its intrinsic value, something no paper currency has managed to do over history.

◆ Gold is insurance. Insurance isn’t supposed to make you rich; it’s supposed to keep you from being poor. The best thing to happen is your insurance never pays off because nothing bad happens.

◆ Hope for the best, but better to prepare for the worst. A nice rock can help.

That was the dismissive assessment of gold by a snarky investor in a recent television advertisement for a cryptocurrency fund.

She apparently was unperturbed by the massive, 50%-plus drop in Bitcoin from its peak in late 2017, and equally oblivious to the bull market in the ‘barbarous relic’ the past couple of years.

In fact, there has been a stealth move to gold in the past year, both by investors buying exchange-traded funds that hold the metal and central banks, which have been shifting a portion of their reserves from traditional paper currencies, notably the U.S. dollar, to the monetary metal, according to J.P. Morgan’s global markets strategy team led by Nikolaos Panigirtzoglou.

Despite the U.S. stock market’s ascent to records, mutual fund investors have been surprisingly cautious. They have yanked money from equity funds and poured $1 trillion into bond funds despite historically low yields in 2019, a pace that appears to have continued in the new year, the JPM analysts write in a client note. They have also poured money into gold ETFs, boosting the ETFs’ assets back to their highs of 2012 (see chart above), shortly after bullion peaked near $1,900 an ounce.

Since late 2018, when Barron’s published a bullish cover story on gold investing, the metal is up more than 30%, with the front-month futures contract settling Tuesday at $1,569.20. In the final installment of this year’s Barron’s Roundtable, Sonai Desai, portfolio manager and chief investment officer for fixed income at Franklin Templeton, endorsed gold ETFs, such as SPDR Gold Shares (ticker: GLD), as a hedge against the risk of market and geopolitical volatility.