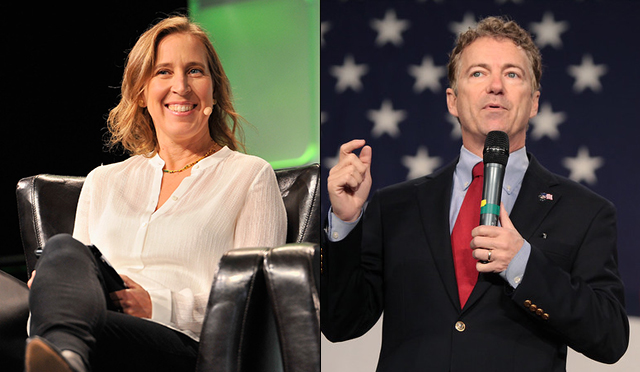 The decision appears to have come just two days after President Trump praised the Big Tech giants as “MAGA.”

YouTube has removed a video from its platform that shows Sen. Rand Paul (R-Ky.) stating on the Senate floor the name of a person who conservative media have suggested is the whistleblower whose complaint triggered the impeachment inquiry of President Trump.

A chilling and disturbing day in America when giant web companies such as @YouTube decide to censor speech. Protected speech, such as that of a senator on the Sen floor, can be blocked from getting to the people. This is dangerous & politically biased. https://t.co/LnbkZJOYgS

Nowhere in my speech did I accuse anyone of being a whistleblower, nor do I know the whistleblower’s identity. YouTube has taken it upon itself to decide what questions can even be asked in the public debate, including on the Senate floor. This is wrong! https://t.co/Czm8XobiLI

The company, home to millions of hours of video content, said in a statement on Thursday that “videos, comments, and other forms of content that mention the leaked whistleblower’s name” violate its community guidelines and will be removed from the site.

“We’ve removed hundreds of videos and over ten thousand comments that contained the name. Video uploaders have the option to edit their videos to exclude the name and reupload,” Ivy Choi, a spokesperson, said in the statement, which was first reported by Politico.

The video clip removed by YouTube comes from the Senate impeachment trial, when Paul mentioned a name that has circulated in conservative media as the whistleblower. Paul did so after Supreme Court Chief Justice John Roberts declined to read a question he submitted including that person’s name.

Paul says he does not know if the name he said on the Senate floor is the whistleblower’s or not, but he said it was wrong for his speech to be censored.

“It is a chilling and disturbing day in America when giant web companies such as YouTube decide to censure speech,” he said in a statement. “Now, even protected speech, such as that of a senator on the Senate floor, can be blocked from getting to the American people. This is dangerous and politically biased. Nowhere in my speech did I accuse anyone of being a whistleblower, nor do I know the whistleblower’s identity.”

Though Sen Paul’s response above was solid, he had an extremely weak response during a conference call on Thursday, as Breitbart reports:

“I’m not for censoring YouTube, they’re a private company, they can do what they want, but they should not be above criticism and they should not pretend to actually be for expansive speech,” Paul said on a conference call with reporters on Thursday.

Telling Big Tech to respect the First Amendment is not “censorship.”

It’s Big Tech and the Big Banks which are engaging in censorship by banning people from the new public square, assigning them social credit scores and closing their bank accounts for their legally protected speech.