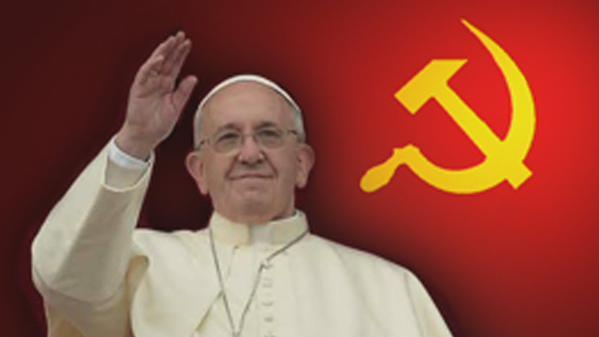 On the heels of calling for a Marxist economic conference this coming March (“Economy of Francesco”), Jorge Bergoglio (a.k.a. “Pope Francis”) has once again opined on financial matters.  The purported head of the Catholic Church has now designated “tax cuts” as sinful behavior on a par, apparently, with stealing, lying, and adultery:

Today’s structures of sin include repeated tax cuts for the richest people,

often justified in the name of investment and development.*

Bergoglio did not mention what category of sin advocacy for tax cuts falls under – venial or mortal.  Maybe the details of how such a policy ranks in offending Divine Justice will be hammered out at the upcoming Economy of Francesco Commie confab!

In Bergoglio’s collectivist mind, those who try and keep their wealth from the ravenous demands of the State are somehow denying the poor their just due:

Every year hundreds of billions of dollars, which should be paid in taxes to

impeding the possibility of the dignified and sustained development of all

What Bergoglio and his fellow socialists do not understand is that tax cuts lead to economic growth, whether they are for higher or lower income groups.  The less wealth that the State confiscates, the more is available to be used for saving and investment – two keys to economic growth.  The rich do not horde their money but expand and create businesses which leads to more and better paying jobs for lower income groups who supposedly Bergoglio wants to help.

The poor will only be uplifted by greater production where more goods and services are available at lower prices.  Redistribution of income via taxation does not create new wealth, but simply transfers existing wealth from the productive class.  Moreover, taxation has the deleterious effect of making individuals produce less since their efforts are siphoned off at the point of a gun.  More taxation means less production and, thus, less and more expensive goods for the poor.

Of course, this is basic economic theory that any sane person can understand unless one has matriculated to a Western university or college or pays attention to economic ignoramuses like Jorge Bergoglio!

Bergoglio’s constant attention to the plight of the poor along with other social issues (“climate change,” the environment, immigration) does not align with the vision that the Entity, which created the office that Bergoglio currently holds, had in mind.  On at least two occasions, He counseled His followers to focus their attention on spreading the “good news” instead of earthly concerns:

Let the dead bury their dead, but go thou, and preach the kingdom of

While the Church has always sought to protect and help the poor, widows, orphans, and the downtrodden, its primary mission is to preach the Gospel.  Since the time of the Second Vatican Anti-Council, 1962-65, and especially during the “reign” of Pope Francis, evangelization has been condemned and, like tax cuts, is now considered sinful activity.

Bergoglio’s criticism of tax reduction is, no doubt, aimed at the Trump Administration’s plan for an additional round of tax cuts.  Tax reduction, however, without cuts in government spending will further explode budget deficits which are now even beyond sustainable.

Without corresponding spending reduction, tax cuts will mean that the Federal Reserve will have to make up for the short fall with further money printing.  One cannot have Big Government and tax cuts simultaneously.  The inevitable monetary crisis will, unfortunately, be blamed on tax cuts and will play into the hands of Bergoglio and his fellow travelers.