With round 2 of the Democrats long march into November now behind us and New Hampshire nowhere near the utter fiasco that the Iowa caucuses were, we’ve gotten another sign it could be a very long year for the very depressed Democrats whose top candidates now appear to be ‘Breadline’ Bernie Sanders, Pete Buttigieg and pretty much unknown Amy Klobuchar with both Elizabeth Warren and Joe Biden laying big fat eggs, and giving many more evidence that Hillary Clinton might be preparing to thrown her witches hat into the race.

With ‘Breadline’ currently having 25.9% of the NH Dem votes while ‘Pete’ brought in 24.4% and Klobuchar had nearly 1/5 of the votes at 19.8%, the rapid fall of both Biden and Warren helps to underscore why so many Democrats are depressed as reported in this Daily Beast story, with the entire impeachment debacle blowing up in Democrats faces while President Trump runs towards November on a major hot streak.

As leftist talking head Van Jones recently stated, Democrats are sad and depressed because they can’t figure out who could beat President Trump in November and with many Democrats having a death wish over another President Trump win in November as was reported in this College Fix story, we thought we’d take a few moments in this story to remind those depressed and in despair just how very fortunate we are here in a still-free America despite the globalists/democrats/neocons attempts to kill off the US Constitution and the 1st and 2nd Amendment’s.

So while November is still a ways off, we’ll be taking a look within this story at the latest news in the world of politics with the ‘Bernie or bust’ cry freaking out the Democrat establishment while reminding everybody, while ‘Breadline’ recently claimed that ‘Socialism is exactly the agenda that Americans want‘, that ‘agenda’ has brought mass death tolls to every corner of the planet and, with cries going out for gulags for Conservatives among some Bernie fans, an agenda that should be ‘resisted’ at all costs. 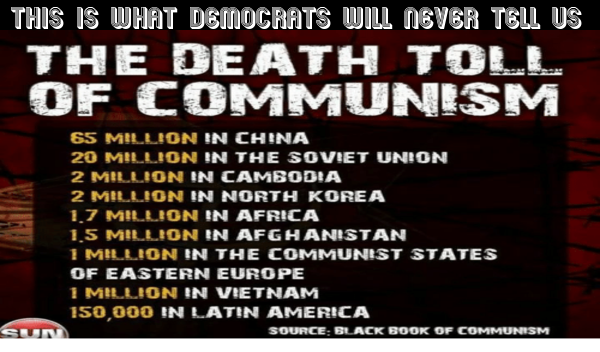 As we had reported back in 2019 in this ANP story titled “Staggering Poll Numbers Show What America Is Up Against: As Younger Generations Embrace Socialism & Censorship, They Ignore Socialism’s Growing ‘Kill Count’ – Death By Government: ‘First they take your speech, then they take your life'”, ‘death by government’, forced obedience to government, tyranny, famine and mass starvation go hand in hand with socialism through history.

In a story over at Reason that we used as a source for that story titled “Sorry If You’re Offended, but Socialism Leads to Misery and Destitution – Socialism is the leading man-made cause of death and misery in human existence” we’d reported facts the far-left now pushing for socialism never want us to know.:

Socialism is the leading man-made cause of death and misery in human existence. Whether implemented by a mob or a single strongman, collectivism is a poverty generator, an attack on human dignity and a destroyer of individual rights.

It’s true that not all socialism ends in the tyranny of Leninism or Stalinism or Maoism or Castroism or Ba’athism or Chavezism or the Khmer Rouge—only most of it does. And no, New York primary winner Alexandria Ocasio-Cortez doesn’t intend to set up gulags in Alaska. Most so-called democratic socialists—the qualifier affixed to denote that they live in a democratic system and have no choice but to ask for votes—aren’t consciously or explicitly endorsing violence or tyranny. But when they adopt the term “socialism” and the ideas associated with it, they deserve to be treated with the kind of contempt and derision that all those adopting authoritarian philosophies deserve.

But look: Norway! (Democrats shout!) Socialism is perhaps the only ideology that Americans are asked to judge solely based on its piddling “successes.” Don’t you dare mention Albania or Algeria or Angola or Burma or Congo or Cuba or Ethiopia or Laos or Somalia or Vietnam or Yemen or, well, any other of the dozens of other inconvenient places socialism has been tried. Not when there are a handful of Scandinavian countries operating generous welfare-state programs propped up by underlying vibrant capitalism and natural resources.

And all we need to do is look to the south to Venezuela to see socialism in all of its ‘glory’ in more recent years, where the Venezuelan people have resorted to eating wild dogs and rats in the streets, capturing zoo animals from their cages for their next meals with some people even resorting to eating their own pets to survive. Who is really ready for socialism, America? 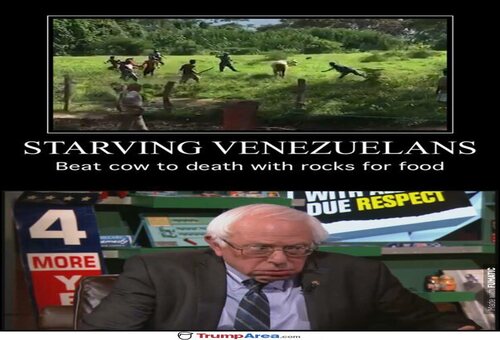 And more good news for President Trump supporters comes to us from this recent Western Journal story which reports a new poll by Gallup has found that 53% of Americans would never vote for a socialist President, even if they were qualified, with only 45% of Americans saying they’d vote for a socialist. The poll linked here titled “Socialism And Atheism Still U.S. Political Liabilities” also found that while 76% of Democrats would vote for a socialist president in America, only 17% of Republicans would and interestingly the poll also pointed out only one ‘group’ tested received majority opposition; socialism.

More than nine in 10 Americans say they would vote for a presidential candidate nominated by their party who happened to be black, Catholic, Hispanic, Jewish or a woman. Such willingness drops to eight in 10 for candidates who are evangelical Christians or are gays or lesbians. Between six and seven in 10 would vote for someone who is under 40 years of age, over 70, a Muslim or an atheist.

So while the far far left pushes for a socialist president, as Susan Duclos has pointed out to me many times, the few remaining ‘sane’ Democrats would never vote for a socialist president. Hence the ‘rock and hard place’ situation that Democrats now find themselves in, with ‘Breadline or bust’ for many far-left Democrats who clearly never did their history homework, with those same people threatening to revolt and burn down cities if Bernie doesn’t win in 2020, and the ‘sane’ Democrats who did their history homework and would never vote to bring socialism into America.

And while we’ll hold back for now on reporting that Hillary Clinton has joined the race, as Newsweek had reported back in 2019, even Hillary said she was ‘waiting for an opening’ and might run if she saw one and with Democrats looking incredibly weak, even the DNC might be begging her soon to get back into the race.

With a Trump-hating Democrat Senate candidate in Maine rolling out a campaign t-shirt depicting a guillotine, claiming it was a symbol of the work that needed to be done, coming at a time when many on the left want gulags for Conservatives and Trump supporters, insanely thinking that free people will simply hand themselves over to be ‘re-educated’ or even slaughtered, we’re reminded of why America’s Founding Fathers incorporated the 2nd Amendment into the US Constitution in the first place, not for hunting but to ensure Americans are able to defend their families and loved ones against people or tyrants who are thinking of doing them harm.