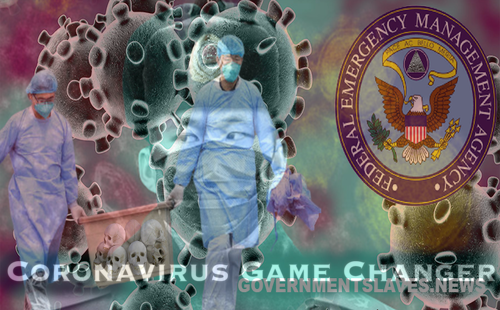 – Use Of Force To Quarantine Coronavirus Victims Is Coming To America

Very rarely will we lead off an ANP story with a video but the one below has to be shown before we continue too far. While Arkansas Senator Tom Cotton recently ripped the establishment media into little bits and pieces by claiming they continually spout the Chinese communist party line on coronavirus while doing an appearance with Maria Bartiromo on Fox News, the Brighteon video directly below shows many scenes we’ll never get from the mainstream media, that of forceful roundups, the brutalization of people simply for not wearing masks and quite possibly, the brutal executions of coronavirus victims by the police in China.

This video is certainly not for the faint of heart and after watching it, can you imagine THIS going on in America?! Welcome to ‘medical martial law’ and if this is an indication of what is ahead, with reports of lockdowns now outside of China in both South Korea and Iran, Americans better start paying attention and preparing for what could easily be coming to American cities because if they’re not prepared, as people on lockdown throughout China have learned, it’ll be too late by the time the quarantine starts and the food stops flowing.

As we’ll see in numerous additional videos below, the next one after this 1st one showing one dead body after another lining a street in China, Americans are definitely NOT getting the truth about this pandemic from the government of China though as my well-trusted US hospital admin source has told me, they themselves don’t trust the information on coronavirus we’re getting from China and my source is definitely NOT a ‘conspiracy theory’ person though they’re beginning to think more and more this might be some kind of ‘conspiracy’. So before we continue, can you imagine scenes like this playing out in the streets of America? Please leave your thoughts on this video and the others and everything happening now in China in our comment section below.

(ANP FUNDRAISER! Following Susan Duclos’ heart attacks and hospitalization, All News Pipeline will need some financial help in the months ahead. So if you like stories like this, please consider donating to ANP to help keep us in this ‘Info-war’ for America at a time of systematic censorship and widespread corruption.)


Think that things aren’t bad in China with the very real potential of things turning very bad here in America? The next video below of barely over 30 seconds taken by a scooter driver in China who is riding down a residential street shows at least 12 dead bodies laying by buildings and sidewalks within barely 3 blocks.


And while the streets of Baltimore have turned into ‘death zones’ with 6 people shot within hours of each other just days ago while the streets of San Francisco have turned into gigantic homeless encampments where people are leaving body solids and fluids all over the streets, imagine what America might look like should this killer virus get on the loose here, especially in the big homeless cities, where medieval diseases are already flourishing?

Then think about this next one! According to many citizens of Hong Kong who’ve been doing their own research into coronavirus with information hard to come by through the communist China government, coronavirus can be spread through pipes, just like SARS, as reported in this Whatfinger News story.

So if coronavirus can be spread through sewage pipes like SARS as reported in this Live Science story, where two residents of an apartment building which shared the same pipes became infected with the virus despite having not visited China, potentially any large city or suburbs that shared the same systems could be at risk.

Videos like this one below from Brighteon help to emphasize how bad this outbreak really is.


The next video below also leaked out of China shows 3 Chinese police officers walking down the empty streets when an approx. 25 year old man spontaneously collapses and dies from rapid-onset #Covid19.

As we had reported on ANP previously, doctors have have reported that people who get the virus but recover are then often getting it for a 2nd time and collapsing and dying on the spot like we’re witnessing in this video below. And as ‘Theodore Smith’ states on Twitter of this video which he posted there of what appears to be sudden onset coronavirus heart failure due to cytokine swarms, “I’m telling you guys repeatedly: NONE OF THE HEART ATTACKS ARE REPORTED! Death toll 100k+.”

Of note to everybody, neither of the other two police officers walking along the stricken victim are wearing masks, either, adding more evidence to the argument that China will never, ever be able to ‘control’ this outbreak and that there are likely many ‘walking time bombs’ on the streets of China this very moment. How many more such ‘time bombs’ are now here in America, not even knowing they are infected but feeling ill while having a friend, co-worker or neighbor who recently returned from a trip to China? This video is truly heartbreaking and tells a story about this outbreak we’ll never get from the mainstream media.