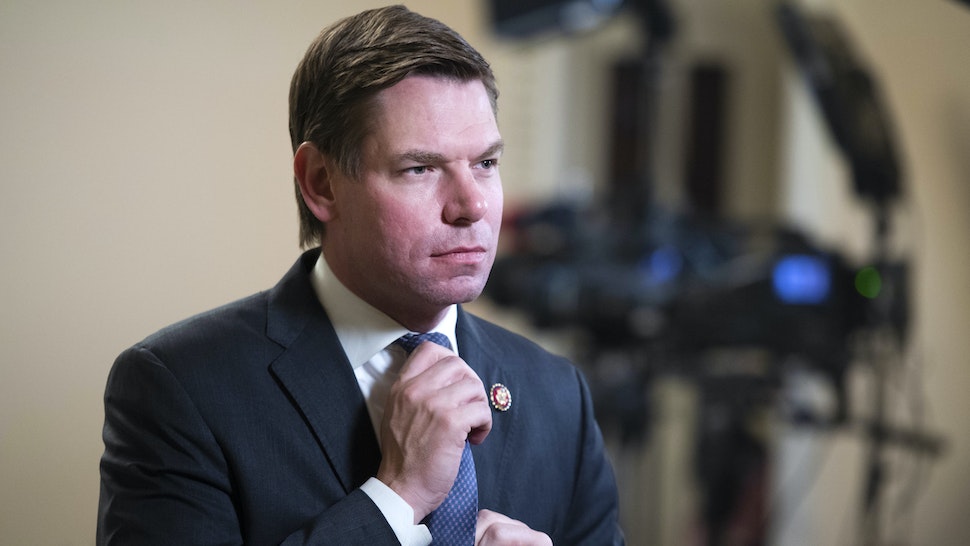 Rep. Eric Swalwell (D-CA) told CNN’s Jake Tapper on Wednesday that House Democrats could seek to impeach President Donald Trump again in the near future after he tweeted about the harsh sentencing recommendations for Roger Stone.

“Might you impeach him over this, over Roger Stone and the sentencing?” Tapper asked.

“We’re not going to take our options off table,” Swalwell responded. “We don’t wake up in the morning wanting to impeach him. We want to work with him on prescription drugs, background checks and infrastructure. But we’re not going to let him just torch this democracy because he thinks that he’s been let off once and we’re not going to do something about it.”

TAPPER: Moments ago, President Trump said he learned lessons from impeachment. The lesson he learned? That Democrats are crooked, vicious, and they should not have pursued his impeachment.

Joining me now is Democratic Congressman Eric Swalwell of California. He serves on both the Intelligence and Judiciary committees.

Congressman, thanks so much for joining us.

Tell me what your take is on what President Trump said he learned in terms of the lessons learned.

REP. ERIC SWALWELL (D-CA): He is learning the wrong lessons.

He’s acting to now corrupt the Department of Justice.

And we’re going to act immediately. We had a meeting today on the Judiciary Committee, an emergency meeting, to decide what’s next. And so we’re going to bring the attorney general in. We’re also going to conduct oversight of what’s going on with the Stone sentencing.

But, Jake, I will just say this. He could just pardon Roger Stone. It would be wrong to do that, but to infect his corruption into the DOJ, I think that’s what’s so concerning to so many people who want independence among our prosecutions.

TAPPER: So, Barr has announced that he will come before your committee, the House Judiciary Committee, in March.

TAPPER: You’re on the committee. What do you want to ask him?

SWALWELL: Well, we want to know, who’s making these decisions? Are

prosecutors still independent? What is going on with other investigations into Trump officials?

TAPPER: The sentencing of Roger Stone will ultimately be left up to Judge Amy Berman Jackson.

Republican Senator Chuck Grassley of Iowa said — quote — “I think the judge is going to take care of all that, and nobody’s going to question the judge’s decision.”

What do you think?

TAPPER: Even some Trump critics said that the seven-to-nine-year recommendation was harsh and excessive.

Do you question that? Do you disagree?

SWALWELL: Well, it fits within the sentencing guidelines.

He should not be treated any differently than anyone else who committed so many crimes and also went to trial. Jake, remember, in our criminal justice system, you are rewarded for taking responsibility early in the proceedings.

If you go to trial, and you put up a bogus defense, or you try and mislead the court, you can be punished for that in your sentence. And that is what is going to happen here, I think.

As always, the president did send out a tweet. Is that enough to object to?

And, as Michael Cohen told our committee, President Trump knows, in many of the mob-like ways that he operates, that he doesn’t have to say something directly, that, indirectly, he can signal what he wants someone to do.

That was how Cohen said he would communicate with the president. And I think by tweeting out that, Attorney General Barr got the message.

QUESTION: Are you concerned that four prosecutors felt so strongly about it that they resigned?

QUESTION: That they got off the case?

What do you think? Are you concerned?

SWALWELL: Yes, I’m very concerned that the independence of prosecutors, the ability of judges to just weigh the facts and the evidence is eroding, that the president’s taken a wrecking ball to that.

And he was just impeached for that. We’re not going to stop holding him accountable. We have learned, when you hold him accountable, you can actually stop the corruption, whether he’s removed or not.