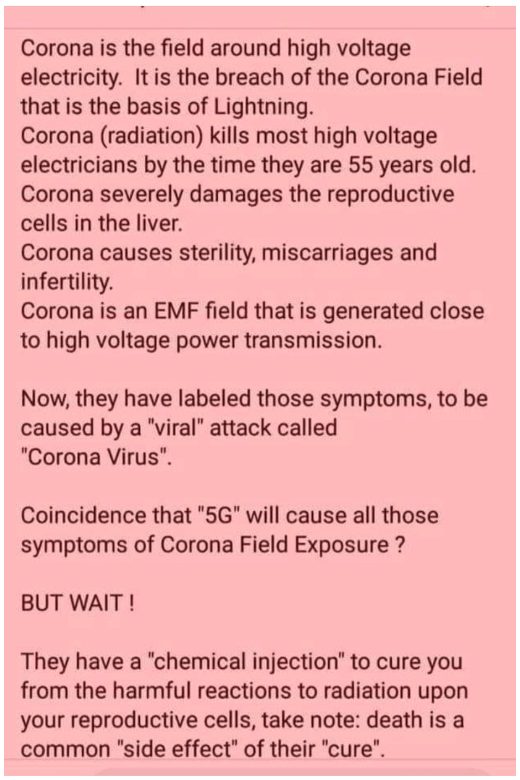 Here’s why they really named it “Corona-Virus”

Coronavirus: A highly contagious and deadly virus that is put on super-steroids whenever and wherever they flip the switch on 5G … while amping up the flu vaccination programs … and chemtrailing overhead with toxin-laden aerosols that further trigger influenza symptoms.  The “corona aspect” of this virus is directly related to one of the greatest silent killers of the modern age—the generation and conveyance of electricity used to power the entire planet.*

*There are multiple instances where the production and conveyance of electrical energy create a corona in high-voltage systems.  The “corona discharge” can be seen as a bluish glow which is explained as follows:

A corona discharge is an electrical discharge brought
on by the ionization of a fluid such as air surrounding a conductor that is electrically charged.[1]

Much more significantly, there are also unseen (but detectable) coronas that are produced in lower voltage systems.  Some of the more common examples that follow, when viewed in the aggregate, represent the invisible sea of electropollution that every human being is immersed in from cradle to grave:

Because every resident of Earth is exposed to all of these types of EMFs and EMR to varying degrees, each individual will develop some level of electrosensitivity over the course of their lifetime.  Some unfortunate folks will even experience full-blown Electromagnetic hypersensitivity syndrome.

Once the city of Wuhan, China was established as an official 5G Demonstration Zone, all of the residents became exposed to the highest levels of radio-frequencies and microwaves necessary to activate a fully operational 5G network.  Not only that, Wuhan was also being set up to be a model Smart City as it was undergoing an accelerated urban build-out of the Internet of Things.  In point of fact, their exposure to all sorts of electrical coronas were reaching unprecedented levels, but it was the 5G activation that really set them ‘aglow’.

Exactly what is a corona according to the Merriam-Webster Dictionary?

Answer: See the dictionary entry in blue highlight below located at 2.(d). 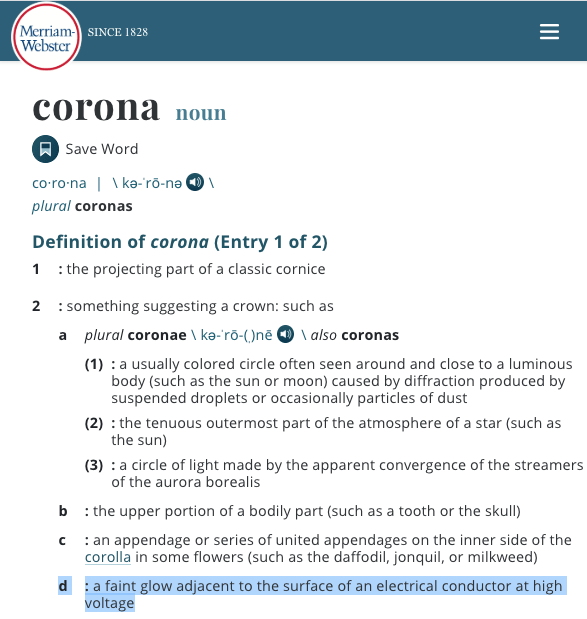 FACT: The glow of an electrically induced corona is a manifestation of radiation being discharged into the environment.  The degree and distance of the discharge beyond the visible corona is much less understood by scientists, physicists, electrical engineers and electricians. However, one thing is certain, and that is that this type of radiation is harmful to the human bio-organism the longer it is exposed to it.

What follows is a list of documented “problems” that are caused by electrical coronas, especially anywhere near power transmission lines.  If coronas can cause “equipment failure”, O-ring degradation and compromise capacitors, imagine the damage that can be inflicted on the human body. 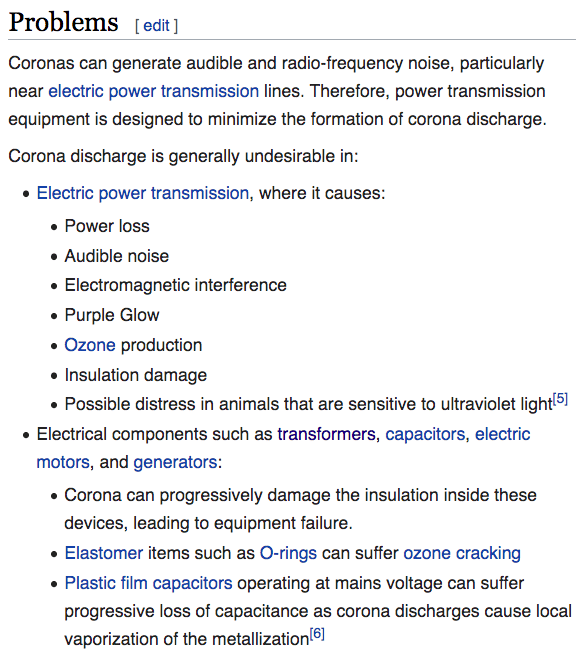 The US government has long been aware that 5G is exceedingly dangerous and unsafe.  In fact, countless scientific research studies have been conducted which have proven the harm to human health that much less powerful radio-frequencies and microwave radiation have caused.  As follows: