He posted bail and is back on the streets.

A California man who was caught on video tape attempting to burn down a county Republican headquarters in Humboldt is back on the streets.

The suspect could be seen smashing windows at the Republican Party of Humboldt headquarters on Saturday Feb. 8, at around 4:53 a.m. He reportedly threw a flammable liquid through the window in an attempt to burn the building down. When police apprehended him, they saw a Bernie Sanders sticker on his bike, and he was brought into custody after a brief struggle.

Michael Valls, 43, of Eureka is the suspect, and he was granted a $25,000 bail which he posted on Monday. He is currently walking the streets awaiting trial. He faces a myriad of charges, including attempted arson, for his alleged rampage against his political opponents. This is one of several times that the building has been targeted by violent leftists in recent months.

This building reportedly being targeted by a Bernie Sanders supporter should come as no surprise following the #Expose2020 campaign by journalist James O’Keefe of Project Veritas.

Last month, O’Keefe exposed several paid employees of the Sanders campaign who bragged about their intent to commit violence on behalf of their socialist overlord.

Sanders employee Kyle Jurek bragged of how leftists would burn down cities if they didn’t get their way at the ballot box:

The video released on Tuesday showed Kyle Jurek, a campaign organizer for the Sanders campaign in Iowa, explaining the devious and violent plans of the radical left if their socialist candidate fails to win the Democratic presidential nomination this year.

“We’re going to make 1978 [1968] look like a f–ing Girl Scout f–ing cookout,” said Jurek, referring to the clashes between police and protesters during the 1968 Democratic National Convention in Chicago.

“The cops are going to be the ones that are getting f–ing beaten in Milwaukee. They’re going to call out the National Guard for that s–t. I promise you that,” he added.

If Trump wins re-election in November, Jurek confirmed that he and his fellow radicals intend to burn the entire country down in a showing of anti-capitalist fury.

“F–ing cities burn,” Jurek said when asked what would happen if Trump were to win, “I mean, we don’t have a lot of time left, we have to save f–ing human civilization.”

“If Bernie doesn’t get the nomination, or it goes to the second round at the DNC convention, f–ing Milwaukee will burn,” he said. “It’ll start in Milwaukee, and then when the police push back on that, other cities will just f–ing (explosion sound).”

Another Sanders operative, Martin Weissgerber boasted about how he hopes to send Republicans to gulag-style camps for the purposes of re-education.

Sanders field organizer Martin Weissgerber explained his various megalomaniacal fantasies at a bar to a Veritas journalist, explaining how he hopes his favorite presidential candidate will become a dictator…

“What will help is when we send all the Republicans to the “re-education” camps,” Weissgerber explained. “Can you imagine Mitch McConnell? Lindsey Graham?”

“The gulags were founded as re-education camps… The first gulag that was opened; have you heard about the Belomorkanal? People came from America to work on the Belomorkanal, for the Soviet project, for the communist project. It’s a beautiful thing,” Weissgerber said, defending the gulag system… 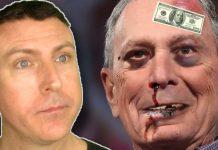