Much remains concerning the corona-virus, its potential planning, or else its exploited event. The discussion and debate, along with investigations and accusations, will remain for a long time. This is an historical event, like 9/11, certain to change the global landscape in a profound manner. The elite agenda can never be dismissed, with uncertain participants, whether voluntary or coerced. Vengeance by China might be to finally wreck the King Dollar and to push Gold onto the financial high throne. The global transition with paradigm shift was either planned with the bio-attack, or else will occur in its aftermath.

Motivation for virus is difficult to discern, and can only be the subject of conjecture mixed with analytic thoughts. The debate will continue in every corner of the globe. What is certain is that when China recovers (a certainty), the United States and China will decouple and both go their separate ways. The reality will be far different from perhaps what the banker cabal entities wish or plan. What will come is the de-globalization toward a slow deliberate L-shaped recovery. The global economy must endure a significant change in supply chains. Few analysts are realistically imagining an L-shaped recovery (slow gradual), while the paid Wall Street harlots continue to pump up the fast snapback V-shaped narrative. One factoid sticks out. Wuhan has 48 plants which supply 80% of the US pharmaceutical components. Present inventory is about three weeks and starting to run down. The US business models have been greatly altered for efficiency in the last two decades, employing low asset bases and Just-In-Time Inventory strategies. These are discussed in the February Hat Trick Letter, in addition to numerous other important effects. The entire global supply chain will be profoundly affected. Financial failures will surely occur, and much debt restructure will be forced. The Force Majeure has begun to be called, at first in Asia, next in the United States. For instance, big hotel commercial loans (mortgages) are entering default. It should be noted that most US companies are just financial shell entities, loaded with debt, filled with financial engineering, operated by dishonorable greedy executive management.

Geopolitical analyst William Engdahl provided a review. The initial impressions after nearly a solid month is that the Wuhan corona-virus (COVID-19) had been artificially manipulated with the addition of HIV elements. The less inhibited scientists from India are on the job with investigations. The bio-engineering procedure is called Gain of Function Research, a risk-filled practice that the USGovt banned in 2013. The changes to more common strains of corona-virus were reportedly done with highly advanced bio-engineering CRISPR methods. This major new technology known as Gene Editing has gained significant attention in recent months. Its advocates claim it will revolutionize everything from agriculture production to disease treatment. Refer to the bold work by Dr Francis Boyle. Certain dangers exist, but official laboratories ignore them, and plow ahead. The future of designer children seems within view. Their GMO foods are a ripening disaster.

Former Langley employee Robert David Steele believes a bio-weapon was unleashed by the Anglo-American security agencies, upon rival China. The corona-virus is an adaption of the SARS virus, which carries further risk to the Chinese population. Numerous other individual items can be found in the February Hat Trick Letter, useful like a research tool. This is a scary time, certain to interrupt sleeping patterns for millions of people. China will effectively shut down the US healthcare system within months. Analyst Jon Rappoport reports boldly on the bio-weapon theory of the China epidemic. He believes authorities might be all too quick to blame many deaths, including from the pneumonia illness, on the corona-virus. Testing procedures are suspect, but officials recite the cases and infections and death counts freely. One application is promising. The Chinese are deploying the Silver Fogger Machine (using powerful ionic silver) to combat the corona-virus, produced by Halosil Intl in the United States. Blood packing methods also show promise. Beware of forced vaccination programs, for the usual reason of being ineffective and possibly laced with toxins and actual virus strains.

The Gold price in Japanese Yen terms is not just breaking out, but in a long-term gigantic event. The breakout carries much deeper significance. To the Jackass, it means Japan is repudiating its US vassal status for a generation. It is embarking on a different path, making distance from the King Dollar and its long shadow. The Gold price in Chinese Yuan terms is also breaking out, in a surprise event. The Beijing leaders might perceive a defensive maneuver soon, which lifts their Gold price much higher. With the Gold moves in major Asian currencies, the backlash from the corona-virus has begun in earnest. It is unintended but natural, since Asian currencies are in decline suddenly. The immediate effect from hampering the Asian supply chain function, with several hundred if not thousand companies idled, is to reduce their currency valuations. The immediate result is to lift the Gold price uniformly across the Asian currencies. Gold market rallies are seen across the major Asian economies. So the virus outbreak has led to a continental Gold breakout. How intriguing! How fitting! Expect the Asians to encourage the process with both currency devaluations and encouragement of public gold ownership. Also, watch the helicopter money plan, which apparently is to occur in Hong Kong.

The extremely bullish chart for the Gold price in Japanese Yen terms is shown. It seems in acceleration mode. The chart is robust and exciting. The Japanese are abandoning and dumping the USD assets is size, while at the same time beginning to shed the US vassal role. In early 2019, the Bank of Japan began a program to dump USTreasurys and to buy Gold bullion for central bank reserves management. All of Asia is abandoning the USDollar. The USGovt stepped in, discouraged their conversion, and intimidated leaders. However, the dumping to convert to Gold appears to have resumed in earnest. Full panic mode has hit. The following sequence might be a reality for years 2020-2021. The corona-virus hits Asia. Their regional economy slides, and their currencies decline. Gold price in their currencies rises to set all-time record highs. The weakened currencies trigger a Gold price rally on a global scale, with the Gold/USD rally occurring last. First is the Gold chart in JapYen terms, in a multi-year breakout. 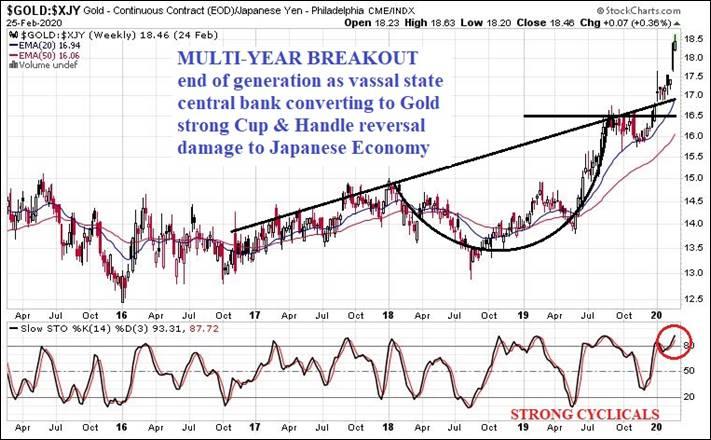 Notice the very long-term chart chart, which together reinforce the point of a serious Paradigm Shift for Japan. A big event is underway, a major shift in allegiance and subservience. Way back in 1980 the entire Yen Carry Trade was begun, put in place on the back of their 0% policy which gained tremendous controversy. The US bankers compelled Japan to move to zero percent, which aided their vast industrial export trade since the JYen currency was pushed down artificially. It led to $trillion profits for Wall Street, borrowing JYen and investing in US stocks. This long era over four decades might be coming to an end, along with the vassal status of Japan, led by their banker cabal tool Prime Minister Abe. The Gold price reaction will be manifested in a generational reversal surge to double the Japanese Gold valuation. Below is a magnificent 50-year reversal. Its pattern is as plain as the nose on our faces. Soon all of Asia will feature Gold price breakouts, including South Korea, Thailand, and Indonesia. 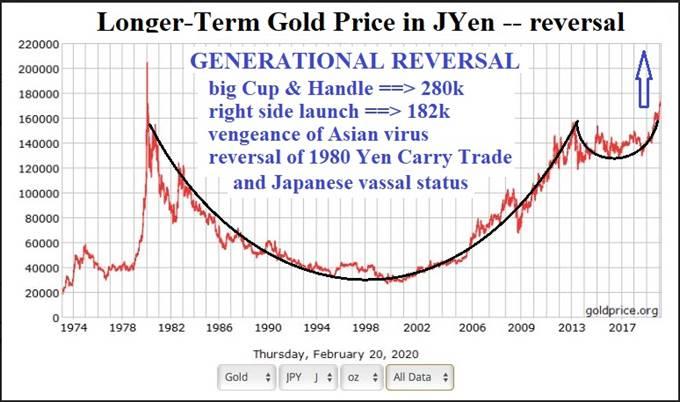 The Chinese will not fulfill their end of the trade deal. It is the so-called pork & beans contract. Expect a surprise event, which goes exactly contrary to the two-year long trade deal between the US & China. It had featured a secret plan to raise the Chinese Yuan valuation, to bring down the USDollar, and to greatly lift Gold in USD terms. The plan, given the arrival of the corona-virus, is essentially scrapped. Watch the Beijing officials devalue the Chinese Yuan by a powerful gesture, cause a big financial crisis in the United States and the West, as vengeance. Many details are in the February Hat Trick Letter, for justification, for effect, with opinions shared by colleagues. The interrupted supply chain from China is but one of several important aspects of this calamitous event. 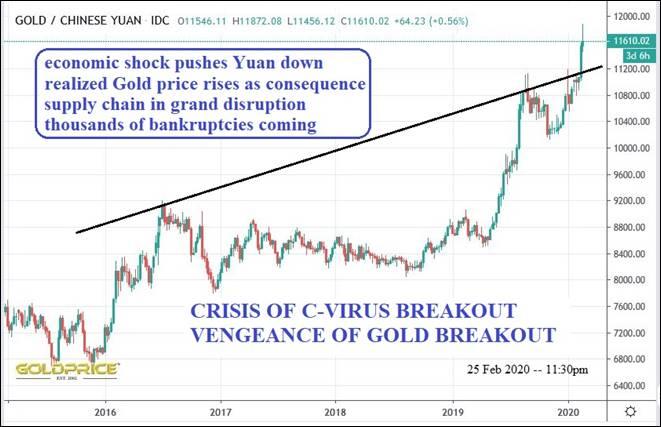 Look at the longer term view of the Gold price in Chinese Yuan (CNY) going back 30 years. Following the Hong Kong independence and the industrialization movement in the early 2000 decade, their Gold price rise in a significant manner. Another major jump shift upward is occurring. 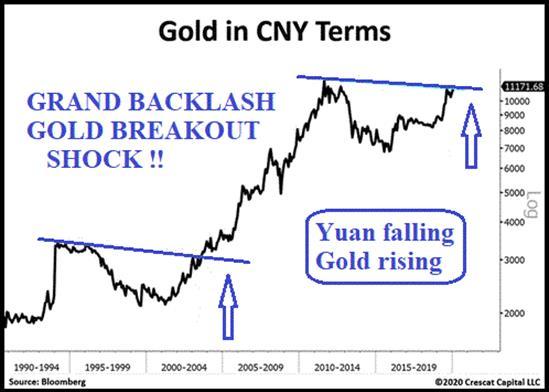 USDOLLAR MAJOR GOLD RISE
The Gold price in USD terms still remains below the 2012 high of $1900/oz. However, the point of past reference tends to be the $1200 to $1300 lows which endured for a few years. Major headlines are being made with the march toward $1800 and $1900. It is exciting again, except for the miserable worry about virus infections and broken supply chains. They will be re-worked, as President Trump advised some selected leading firm CEOs earlier this month.

Vengeance of Asian virus will be seen in the Gold market explosion which will take down the COMEX and LBMA. The US/UK banker criminal set has run out of fraudulent paper devices, now that the Exchange For Physical sham has been used, abused, exposed, and dissected as a gigantic gimmick. The breakdown of the bond market, the LIBOR market, the junk bond market, and more will precipitate a Gold response. The Gold price in USD terms is destined to hit $2000/oz this year. The banker cabal will surely interfere, but the market has some notable big change agents. Two so-called Gold Whales are at work, who buy every time the price is suppressed by enormous paper attacks with no real basis, fully permitted by the lapdog regulators. The Whales obstruct the banker fraudulent ongoing game. Also, while the Gold price has consolidated, like in September and October and November, the open interest has risen. This means the banker cabal is trapped. Never before has this happened. The COT open interest is near one billion contracts. When Gold sells off, always in the last 30 years, the open interest has fallen. Not this time. This is a stark clear conclusion feature.