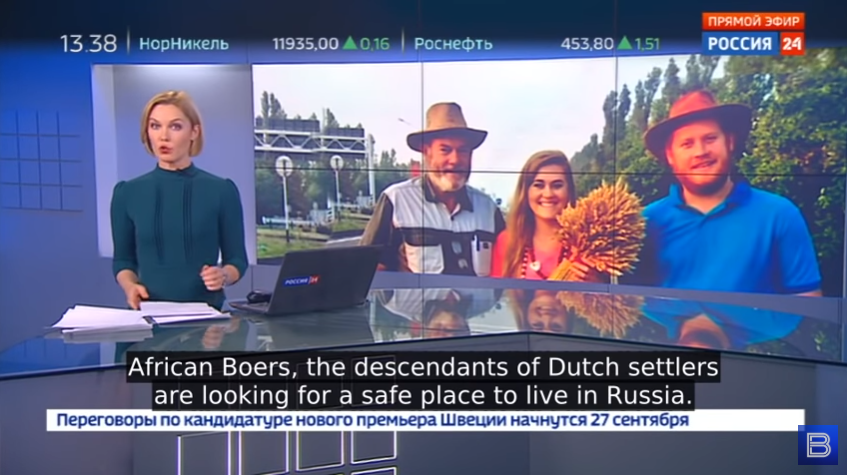 A family of South African Boer farmers is expressing their gratitude for the opportunity to move from their homeland to settle in Russia.

“We have lived in southern Africa for generations but we are considering what the future is for our generations to come,” farmer Johannes du Toit pointed out. He has married a Russian woman, and he expresses hope that his example will challenge false stereotypes about Russia.

In the following video, he speaks very positively about his family’s future in Russia:

“This country has something of everything,” his father Leon Francois Du Toit said, referring to the weather and the quality of the soil. As the leader of a large, Christian community of Afrikaners, he says that Russia attracts Boers with its strong spiritual traditions and high family standards.

Like many others families fleeing the ongoing genocide in South Africa, the Du Toit family is grateful that Russia is opening its doors to them.

South Africa is home to millions of descendants of Dutch settlers, are many of them are now looking for a safe place to live in Russia. Attacks on them by the black population of South Africa are becoming ever more frequent. Vandals are robbing Boer farms. As a result, dozens of Boer families are ready to move:

Johannes decided against moving to France, the country of his ancestors. This Christian from Africa isn’t comfortable with European tolerance for same-sex marriage:

“People like me, Boers and Afrikaners, have come to realize that we don’t want our children to live in a place where an ideology that we don’t agree with is being enforced. It’s in conflict with our values as Christians.”

A hymn sung in a Russian church is like a glimmer of hope for a better future for the Boers. If they can’t find it in South Africa, they can definitely find it here, in Russia, which is known for its hospitality.