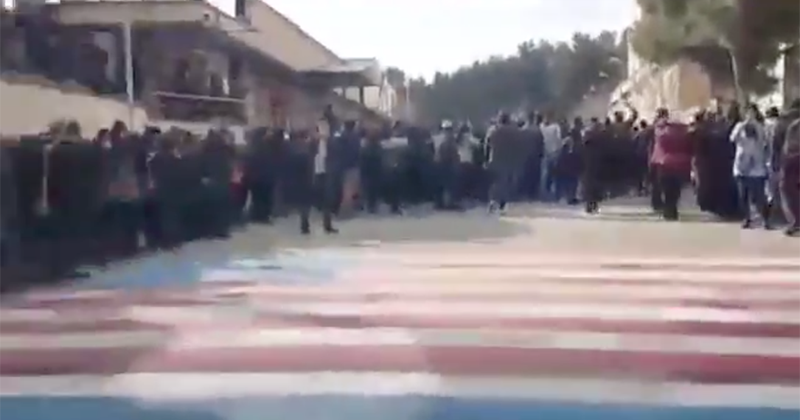 Students leading resistance chant ‘America is not the enemy’

Video out of Iran shows protesters refusing to trample on murals of the US and Israeli flag, painted on the ground, intended for a show of disrespect.

Instead, the protesters, led by students at Shahid Beheshti University campus, walked around the flags, and yelled ‘shame’ at those who stood on the paintings.

The protesters have been chanting ‘Death to Islamic Republic dictatorship’ and ‘America is not our enemy’, according to reports.

Watch how Iranian students refuse to step on American & the flag of Israel.

This should embarrassed Iranian regime & their propaganda funeral for #Soleimani where people were told to chant “Death To America”.
Now people in Iran chanting “Death to Islamic Republic dictatorship.” pic.twitter.com/hTxDuxZeaB

BBC reporter Ali Hamedani noted that “At the height of the Iranian establishment anti Americanism, Tehran Beheshti university’s students refused walking over the US and Israel flag while participating in #IranProtests. They all grew up to hate the two countries but seems like the revolutionary ideology is failed.”

From Soft to Hard Fascism: “Get In Your House Right Now!”