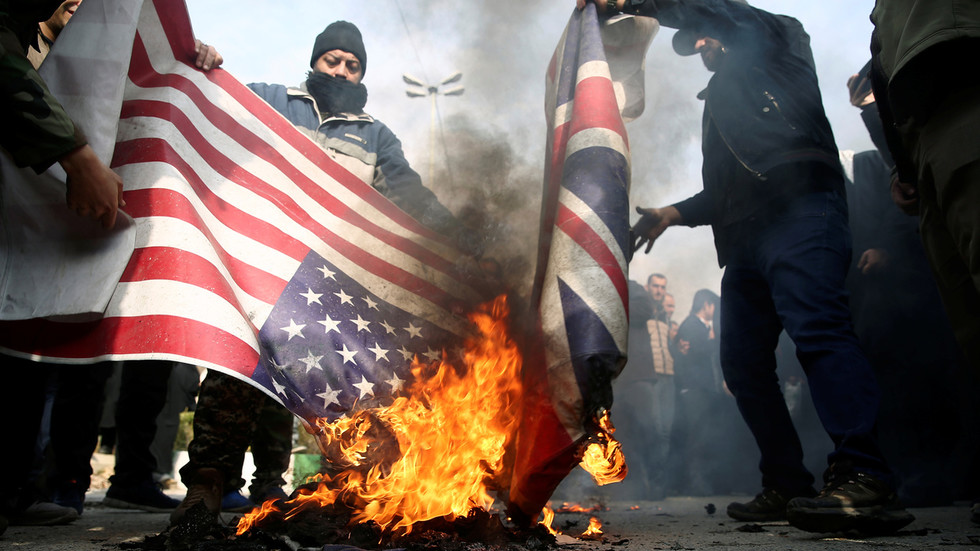 Trump’s ordered assassination of General Qasem Soleimani, head of the Revolutionary Guards’ elite Quds force, not only means a dangerous escalation of tensions with Iran, but also ends fiction that Russia was controlling him.

Just imagine….. If Iran’s President Rouhani had authorised a New Year drone strike on General Mark Milley, the Chairman of the United States Joint Chiefs of Staff, as he was being driven to the airport in Canada.

Would anyone even be suggesting that the attack was done in ‘self-defense’? But that’s exactly the line we’re being fed now about the killing of Qasem Soleimani.

The undeniable truth is that for all his posthumous neocon demonization as the most evil man on the planet, the silver-haired Soleimani played a key role in the defeat of the barbaric death-cult ISIS and other al-Qaeda affiliates in the Middle East. He helped mastermind secular, Christian-protecting, Syria’s against-the-odds survival in the face of a ferocious onslaught by some of the most powerful countries in the world, who unleashed an alphabet soup of jihadist proxies and death squads to try and achieve a violent ‘regime change’. Soleimani’s reward for fighting the groups that have targeted western civilians around the globe- including American citizens on 9-11, and British tourists in Tunisia in 2015, was to be blown up right at the start of 2020. Remind me again, who are the terrorists here?

The airwaves are full of talk about the likelihood of a war on Iran, but the fact is that hostilities have already started. Trump provocatively pulled out of the Iranian nuclear deal, boasted that his new sanctions on Iran were ‘the highest ever imposed on a country,’ and now has ordered the killing of a man regarded by many as the most powerful figure in the country. Soleimani threatened US forces in Iraq we are told, by means of a justification. But what are US forces doing in Iraq in the first place? We’re meant to forget that they came there at the head of an illegal invasion force in 2003 which was supposed to be about getting rid of Iraqi weapons of mass destruction which didn‘t actually exist. What right did the US and its allies have to invade Iraq seventeen years ago? Absolutely none, under international law. But Iraqi WMDs was not the only deception. Far from it.

Condemning Iran for aggression when you just assassinated their guy in Iraq, a county you illegally invaded and continue to occupy militarily, is Big War Nonce Energy.

We’ve been told (ad nauseum) the past few years that Donald Trump was under the control of Putin. That he was a de facto Russian agent. A marionette of Moscow.

At least now, not even the most credulous inhabitant of planet Earth will believe that one. Iran is a key Middle Eastern ally of Russia, an important strategic partner. By assassinating Soleimani and putting us on a military collision course with Tehran, Trump is not only menacing the Islamic Republic, he is poking the Russian bear in the chest, back and face too. Today’s events, for anyone who still had any doubts, shows that the foreign country which have the greatest influence in US politics is not Russia, but Israel (and after Israel, Saudi Arabia).