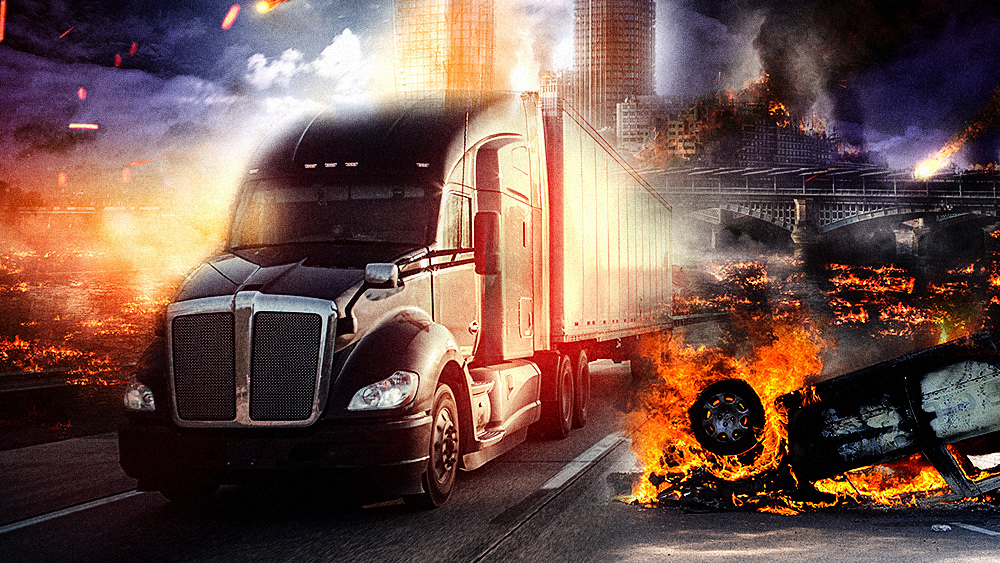 The Executive Director of the Small Business in Transportation Coalition (SBTC) — known as Truckers.com — has issued a stern warning about a “super supply chain crisis” that could severely disrupt trucking and transportation operations that bring supplies to all U.S. cities.

James Lab issued a Dec. 17th press release in which he warned of “nationwide riots that will impede truckers’ ability to make deliveries of products for Americans’ consumption.” Those supplies include food, fuel, medicine, ammunition and other supplies on which Americans depend each day.

This warning was issued a few weeks before President Trump’s drone strike on Soleimani — an event that many believe might set off activation of radical Islamic sleeper cells that have been embedded in U.S. cities, awaiting orders to strike critical infrastructure and cause mayhem.

According to the SBTC’s press release, the authoritarian gun confiscation push of tyrannical Democrats in Virginia could, all by itself, “quickly escalate into armed conflict reminiscent of the Civil War.” As the announcement also states:

Lamb fears the conflict… in Virginia could escalate and spiral out of control.

Truckers will refuse to drive into war zones

Truckers, who represent one of the most under-appreciated class of hard workers in American society, are actually very street smart individuals with a strong sense of survival and self-preservation. They are not going to carelessly drive their delivery trucks into urban chaos theaters where they might be targeted by looters or violent anti-American rioters.

Leftists in America today, including CNN and the NYT, are almost universally in alignment with Iran and its terrorist aims to destroy the United States of America. Some insane Hollywood Leftists such as Rose McGowan are now openly apologizing to Iran for America’s actions, claiming to be living as “prisoners” under the “authoritarian regime” of Trump. (Note to McGowan: You are free to leave at any time, the sooner the better.)

Radical left-wing domestic terrorism groups such as Antifa routinely stage physical assaults on Trump supporters across America, using deadly weapons and mob violence to commit acts of intimidation against their political opponents. The idea that these radical left-wing groups might quickly escalate their tactics into city-wide chaos, murder and mayhem is no stretch of the imagination. This seems to be their plan.

Bureaucrats in Washington D.C. are currently in the process of forcing truckers to use Electronic Logging Devices (ELDs) to log their driving hours. This is a monumental change from the paper log books that truckers have used for decades. The criminalization of paper logs is now accelerating and threatens to cause supply chain disruptions all by itself, warns Lamb. The push for ELDs is part of the government’s never-ending expansion of electronic surveillance of American workers, which is all part of a big government scheme to turn America into an Orwellian prison camp run by corrupt elitists like Joe Biden, whose cognitive function brings up the bigger question of why we call these people “elites” when they are dumber than rocks.

Chaos will escalate throughout 2020

When truckers are beginning to sound the alarm on supply chain disruptions across America, it’s important to listen up and plan accordingly. The 2020 elections are fewer than 300 days away, and insane, radical left-wing lunatics are poised to launch nationwide violence — possibly even an attempted “armed revolution” — if Trump wins re-election.

Even before then, Iran’s sleeper cells may be activated and ordered to bomb fuel refineries, poison water supplies, or carry out suicide bombings in grocery stores or malls. Any of these events would be severely disruptive to American society. If combined, they would be catastrophic.