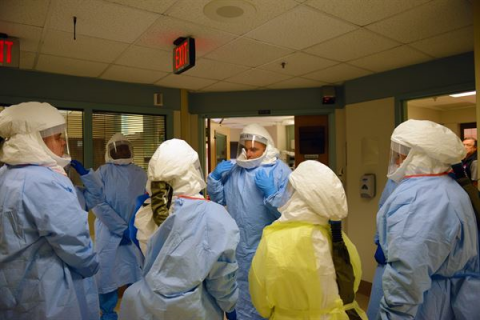 Ebola is airborne and this nightmare scenario is soon to be visited upon the United State and the world as a whole. This article will validate this claim.

In Part One of this series, I noted the following:

1. Ebola is crossing the border in infectons as evidenced by multiple insider reports.

2. Seriously ill patients are being directed to LA.

3. The Ebola vaccine should be avoided at all costs. It contains Ebola.

4. Ebola is much more contagious than the government is telling the people and the available science speaks clearly to this fact. In fact, EBOLA IS AIRBORNE AND THIS HAS BEEN KNOWN BY THE CDC AND ITS PARTNERS FORM MORE THAN A DECADE.

Below, is the story, containing introvertible facts with regard to the fact that Eboal is being engineered to become a pandemic within the United States and beyond.

Doctors Are Condemning the Sending of US Troops to Liberia

Dr. Lee Hieb, former president of the Association of American Physicians and Surgeons has stated that “You can see that these doctors, who are highly trained people, got themselves infected… So sending troops into an area, if they’re dealing one-on-one with a patient, they’re not going to be able to protect themselves very well. It’s not easy to do because you get tired and you get careless and you make some simple mistakes. All it takes is one virus particle.” Elaine Donelly, president of the Center for Military Readiness, has stated that,  “I’m just appalled. Judging from this, the United States seems to have a very confused vision of what ‘national security’ means.” Donelly went on to state that former President Obama is putting America at risk.

America Is In Grave Danger

Some scoffed when I published that researchers from the Canadian government discovered, in 2009, that Ebola could be transmitted across species through airborne means.

This led to speculation that if Ebola could be transmitted through airborne means between mammals from different species, could humans be vulnerable to the same process? The suggestion was met with some derision. Further research indicates that scientists have known for six to eight years that Ebola is an airborne virus as well as the means of transmission that the corporate controlled media tells you about (i.e. bodily fluids). I find it incredulous that the mainstream media, the CDC, the NIH and the Obama administration are silent as to the gravity of the Ebola threat in which millions of people in this country and billions in the entire world are at greater risk because of these crimes of omission being committed against humanity by the aforementioned entities. There presently exists a mountain of work that shows just how Ebola is transmitted through the air and not one of these studies has aired in the mainstream media.  The MSM has had over a decade to investigate and report on this phenomenon. Of course this is an industry that is controlled by 6 people. Therefore, it is difficult to not assume a conspiracy.

What Do We Really Know About the Transmission of Ebola?

No one knows for certain how Ebola virus is transmitted from one person to the next. The virus has been found in the saliva, stool, breast milk, semen, and blood of infected persons.

The virus has been found in the saliva, stool, breast milk, semen, and blood of infected persons. Body fluids (e.g. vomit, diarrhea, blood, and saliva) can result in the inhalable aerosol particles in the immediate vicinity of an infected person. Coughing was identified among some cases in a 1995 outbreak in Kikwit, Democratic Republic of the Congo. Coughs are widely known to emit viruses in respirable particles. Actual vomiting produces an aerosol and has been implicated in airborne transmission of gastrointestinal viruses. Regarding diarrhea, toilet flushing emits a pathogen-laden aerosol that disperses in the air. If you are still not convinced that we are sending our troops into a situation where they will likely contract Ebola through airborne transmission, then consider that  both Marburg and Ebola viruses can be isolated from sera and tissue culture medium at room temperature for up to 46 days!  Even in the most optimal of conditions, aerosolized Ebola, and Reston viruses, at 50% to 55% relative humidity and 72°F, had biological decay rates of 3.06%. and 1.55% per minute, respectively. These rates indicate that 99% loss in aerosol infectivity would occur in 104, and 162 minutes, respectively. Simply put, when our troops walk into an infected zone, they can be infected for one hour and 44 minutes after the release of the Ebola into the air. When it comes to Ebola Reston, the virus can be contracted through aerosolized means for a period of two hours and forty-two minute, almost three hours! There is also strong experimental evidence that Ebola can be transmitted by airborne means. Jaax et al reported the unexpected death of two rhesus monkeys housed approximately three meters from monkeys infected with Ebola virus, concluding that respiratory or eye exposure to aerosols was the only possible explanation.

This scientific evidence merely scratches the surface with regard to the available data related to these facts as they are presented in this article.

Even the MSM publication, the very liberal, and often truth-denying, Washington Post,  admits that Ebola can go airborne on 2/15/15:

…A team of prominent researchers suggested Thursday that limited airborne transmission of the Ebola virus is “very likely,” a hypothesis that could reignite the debate that started last fall after one of the scientists offered the same opinion.

“It is very likely that at least some degree of Ebola virus transmission currently occurs via infectious aerosols generated from the gastrointestinal tract, the respiratory tract, or medical procedures, although this has been difficult to definitively demonstrate or rule out, since those exposed to infectious aerosols also are most likely to be in close proximity to, and in direct contact with, an infected case,” the scientists wrote. Their peer-reviewed analysis was published in mBio, a journal of  the American Society of Microbiology….