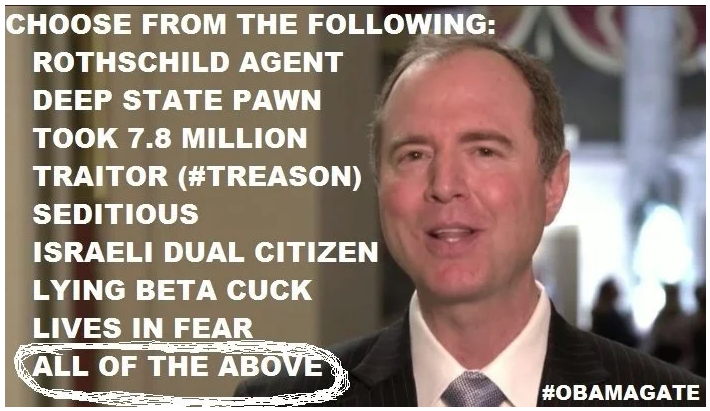 Very few understand that Russiagate was a highly organized Deep State conspiracy conducted by the Democrat Party to overthrow President Donald Trump and to start the hot phase of World War III with Russia.

KEY POINT: Members of the Global Intelligence Community know that Russiagate was actually coordinated by British Intelligence in order to provide the countless American co-conspirators plausible deniability. In this proper context, Russiagate is just the latest of countless plots to subvert the American Republic conducted by the London-domiciled Black Nobility. See CROWNGATE: THE GREATEST CRIMINAL CONSPIRACY IN U.S. HISTORY

Toward that end, Congressman Adam Schiff was selected early on to spearhead this unparalleled act of treason and outright warmongering from his high perch in the U.S. Congress.

Exactly why was Adam Schiff chosen to do the dirty deeds? Here’s why:

“You talk about compromised and easily coerced.
Shifty Schiff is nothing but a political hitman who’ll
do anything his hidden masters tell him to because
they have that much dirt on him. No Congressman
will ever expose themselves as much as Schiff has
unless they have been bribed or blackmailed to.
And oftentimes it’s a combination of Pedogate
blackmail and irresistible bribery that keep them
doing their dirty deeds.”

There’s a well-hidden back story to the Adam Schiff saga that is rarely told by the mainstream media, and only recently reported by the Alt Media—SOTN.

Only by knowing Adam Schiff’s true roots will his extreme hatred for Trump and irrational fear of Russia be properly understood. His background will also explain why he’s always been a pathological liar. House Republicans Demand Adam Schiff’s Resignation, Intel Committee Will Not Tolerate Chairman’s Constant Lying

The Schiff Family was well-known in America as a premier banking family. One of the patriarchs of the Schiff family bloodline, going back to the mid-19th century, was one Jacob Schiff. (It’s unclear if Adam Schiff is directly related to Jacob Schiff, but it’s the bloodline that really matters in this discourse.)

“Jacob Henry Schiff was a Jewish American banker, businessman, and philanthropist. Among many other things, he helped finance the expansion of American railroads and the Japanese military efforts against Tsarist Russia in the Russo-Japanese War.”[1]

Why do the Schiffs and Rothschilds have such an intense multi-generational hatred for Russia?

There are actually several documented reasons for this hatred.

The first is that these criminally insane banksters coveted (and still covet) the landmass of Russia more than anything else on Earth. In short, they want to steal the land and natural resources of the Russian Motherland, along with its industrial base and other state assets such as the massive gold reserves.

Because President Vladimir Putin has done his level best to protect Russia from these hardcore predatory capitalists, they demonize him incessantly as they denigrate Russia at every turn of events. Is there anything that Russia does not get blamed for these days—ANYTHING?

Secondly, these same Ashkenazi banksters have always wanted to totally control Russian society as a means to completely controlling the economy of Russia. However, there was a profound cultural impediment toward accomplishing this objective.

You see, Russia has consistently existed as a massive agrarian society over millennia. Certainly they possess the landmass to farm and forest till their heart’s content.

However, the Ashkenazi Jewry who lived in Russia were always drawn to the cities for work in the professional classes. The Jewish intelligentsia became, as they always do, the lawyers and doctors, bankers and accountants, politicians and businessmen, professors and scientists, jewelers and gold dealers, etc. In so doing, they became the power-players and power-brokers throughout the big cities, eventually owning the whole place either directly or indirectly.

Now here’s the real problem that the Jewish intelligentsia faced everywhere in Russia save Moscow and Saint Petersburg. Russia is a hugely rural country; not an urbanized nation. The only two cities most folks can even name between Europe and Alaska are Moscow and Saint Petersburg. That’s how much farmland and forest dominate the Russian countryside. And, that’s how very few big cities there are.

When so much of Russia is populated by humble farming, logging and mining communities, there are far fewer opportunities for the professional classes to take over the same way Ashkenazim took over European and American cities.

Siberia, for instance, was known as a matriarchal society with strong elements of ancient shamanism which were quite resistant to being dominated by these professional classes monopolized by domineering men. The Russian people are a very simple people who are close to the Earth and very suspicious of outsiders after centuries of invasions like those launched via the British-initiated Great Game.

In point of fact, the Great Game was nothing more than Rothschild banksters using Great Britain and other powerful militaries to steal Russian land and resources. And the economic and financial version of this war by stealth continues in earnest up to this very day. Moreover, there is no other press on the planet today as maniacally hostile toward Russia as London’s Fleet Street, as it has been since its very inception.

KEY POINT: The many waves of migration of the Ashkenazi Jewry away from their ancestral lands in Russia (e.g. Ukraine) and Eastern Europe occurred to a great extent because of their inability to take over the largely agrarian societies. When the professional classes especially saw that they were unable to exert their control over the people or influence the earthbound communities as they did in Western Europe, they soon left but with much animosity in their hearts. The city of Chicago is full of many of these highly disaffected and vengeful Russian expatriates. And, the profound and pervasive Russophobia intensifying across America today is entirely due to these politically powerful elements whose roots are found in the same Khazarian Mafia that dominate London, New York City, Paris and Tel Aviv.

There’s a very detailed history on Western Russophobia that was published by this media platform as a 14-part series under the following title. For the uninitiated, this series provides a stand-alone narrative and valuable background info on the ongoing Great Game (that’s really the fiercest and largest resource war on Earth).