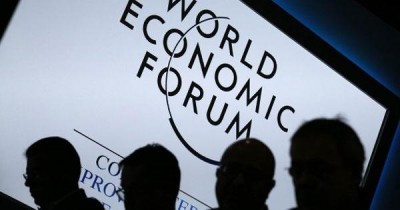 Friends, this year the WEF is celebrating its 50th Anniversary. Forty-nine (49) of the insanely pompous – and every year more – WEF events took place in Davos, Switzerland. Just one, in 2002, after 9/11, was moved to New York City, paradoxically for ‘security reasons’ they said – the logic of such a move was as ludicrous as the WEF itself.

Friends, you should go to the WEF, the notorious World Economic Forum in Davos, (21-24 January), where a 12 square-meter hotel room costs US$ 10,000 per night (if you don’t believe it, look it up on the internet), and where it’s totally normal that sharpshooters are everywhere on roof tops in subfreezing temperatures – to protect the about 3000 upper-echelons, of course – and that a huge section of the Zurich airport has been cordoned-off for the private planes of the ‘environmentally conscious elite’ — and where Trump arrived this morning, Tuesday, 21 January; and where the “plane-spotters” with their sophisticated binoculars and telescopes are practically camping in the airport areal — to be first when the airport gates are opened, for them to enter the airport terraces to “spot” the arriving VIP / CEO / celebrity private planes (you get the picture, it’s sort of like Black Friday, with the campers in front of the Walmart gates) – hundreds of private jets are expected – the normality of abject uselessness and decadence of the rich – and its acceptance and even glorification by the populace, is much more than George Orwell could have ever thought of when he wrote 1984 in 1948.

This year some 130 high-ranking guests, protected by international law, are expected – whoever they may be – in addition, are also anticipated 5 Royals, 22 Presidents, and 23 Prime Ministers. They will be shielded by Swiss police and military, a total of about 5000. President Trump will get about 300 special Swiss security police, in addition to his own security contingent, plus a private helicopter, brought in by military cargo from the US. His two days in Switzerland will cost the US tax-payer more than US$ 3.4 million, not including security personnel; peanuts compared to the entire Chabang for some 3,000 “high-level” VIPs and celebrities, or simply “wanna-be-seens”, who are eager to rub their elbows sore with the ‘real important’ people. What a farce!

The Zurich police chief told a reporter, that they, the police, have good relations with Trump’s security detail, “we are seeing eye-to-eye, they consider us as competent and equals”. What can I say? It looks like this high-ranking Swiss police officer’s self-esteem depends on the acceptance level of Trump’s secret service police. How sad!

When President Trump steps off Air Force One, he transfers immediately under utmost security, including the watchful eyes of zillions of sharp-shooters on the airport’s rooftops to his helicopter, especially flown-in from the US in a military cargo plane, to be carried like a king to Davos. Most of his support troops will have to travel in blinded SUVs and limousines in the WEF-congested highways to Davos. Trump will be in best company – Greta Thunberg is also expected in Davos, albeit with a day’s delay, due to a sudden high fever. Nevertheless, she promised to be there.

They say, President Trump’s security risk is today even higher than what it was in 2018, when he first attended Davos, because of the constant threats on Iran, and mostly because of his ruthless, out-of-law assassination of Iran’s top General, Qassem Suleimani. That’s why his security detail has to be even larger than it would be otherwise. – Well, you may ask, since when does a murderer deserve protection? – Unless he is a suicide risk, which Trump – the epitome of egocentricity, certainly isn’t.

They, these WEFers, will just continue robbing you – as they have been doing for at least the last 200 years – and they have managed to this so skillfully – that the great lot of us ‘folks’ admire them – come to watch them in awe arriving in their private jets and taking off in their private jets… that’s how low we have sunk. But it’s never too late, folks, to wake up and ignore this nonsense – ignore and discard it. They are not worthy of an iota of your attention.

Their agenda is spiked with lies and deceptions. This is the official agenda – it’s called an agenda for “Stakeholders for a Cohesive and Sustainable World”:

1. How to address the urgent climate and environmental challenges that are harming our ecology and economy

3. How to govern the technologies driving the Fourth Industrial Revolution so they benefit business and society while minimizing their risks to them

4. How to adapt to the demographic, social and technological trends reshaping education, employment and entrepreneurship.

That’s what the outside world gets to see and hear debated, the common folks like you and me, and those thousands ‘climate change’ protesters that have been trekking for tens of kilometers through snow and cold to reach Davos and leave their message to the Big Ones – “take responsibility, our planet is burning”. These people may get to hear some of the official debate on (man-made – CO2-caused)-climate change, and promises on what they – the Big Ones – will do about it.

When behind the scene, behind closed doors – off earshot of the ‘commons’ – another narrative will be discussed, most likely in combination with ‘climate’, how to use climate and the fake climate propaganda, combined with harmful, potentially deadly G5 and soon G6 radiation technology, the 4th Industrial Revolution, and the gene- and “biotechnology – GMOs, and more to the heart of the matter, CRISPR (pronounced “crisper” – Clustered Regularly Interspaced Short Palindromic Repeats), a genome editing tool that can selectively alter human (and other living beings’) DNA.

These forces of commandeering power combined and united – plus, of course, eternal wars – may alter the course of the world. One of the elite’s key objective is reducing the world population, so that the elite can continue living in opulence, without having to share Mother Earths generous, but limited resources with 7.7 billion people, and growing – use some of them, deplorables, as oppressed slaves and get rid of the rest.

That sounds harsh. But these are not my words. Already in the 1960s Henry Kissinger, the world’s most sought-after war criminal still alive, a Rockefeller ‘scholar’ and associate and steadfast Bilderberg Society steward, said that a key objective of the Bilderbergers is population reduction. In 1974, newly rewarded by the Nixon Administration as Secretary of State, for the fascist coup “9/11/73” he led in Chile, had this advice:

“Depopulation should be the highest priority of foreign policy towards the third world, because the US economy will require large and increasing amounts of minerals from abroad, especially from less developed countries.”

There you have it. The dark Luciferian elite of the WEF may be talking eugenics. We don’t know. But given the supremacy of the west and the deplorable fate of the deplorable people, who knows? It doesn’t look too farfetched with all we know that is going on in the occult. With Washington’s / Pentagon’s / NATO’s ability of extra-judiciary drone killing of just about anybody who may be considered a US ‘national security’ risk, or rather a risk of preventing the Global Elite to reach its target of Full Spectrum Dominance – we are moving ever closer to an all-annihilating WWIII – except that this very elite knows that with a nuclear holocaust there will be no winners, that they themselves may be wiped out – how to enjoy then the stolen riches? – So, they may opt for a “soft” version of population reduction – eugenics – and continuous, eternal and highly profitable regional conflicts and wars.