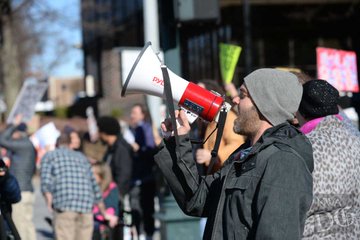 People from across the United States heeded calls from the ANSWER Coalition and CODEPINK on Saturday, resulting in protests against a possible U.S. war on Iran in more than 70 cities across 38 U.S. states.

The protests, demanding for U.S. troop withdrawal from Iraq and ending sanctions on Iran, were called for earlier this week in response to U.S. President Donald Trump’s ordering of additional U.S. troops to the Middle East in response to protests following U.S. air strikes. Tensions quickly increased as the U.S. ordered the assassination of Qassem Soleimani, the popular leader of Iran’s Islamic Revolutionary Guard Corps’ Quds Force, and, as a result, the protests quickly morphed into an emergency mobilization aimed at stopping what some fear could become World War III.

Tensions between Iran and the United States are nothing new, but have been steadily increasing ever since Trump formally reneged on the Joint Comprehensive Plan of Action (JCPOA)—also known as the Iran nuclear deal—in May of 2018.

Protesters across the country joined together to demand an end to U.S. presence in Iraq and the Middle East and to no new war with Iran. During the past nearly 30 years, more than one million Iraqis have died as a direct result of U.S. occupation, sanctions, and bombing, with the U.S. government having spent trillions of dollars.

Trump repeatedly promised on the campaign trail and after taking office that he would put “America first” and would bring our troops home. Instead, he repeatedly and recklessly brings the U.S. on the brink of war with various nations time and time again. But this far, many believe, he went too far.

Americans are fed up with endless wars, concerned about the future for their children, are appalled at the cost of war while the funding of services at home continually falls short, and deeply concerned about the wellbeing of innocent lives in the Middle East, and more. And so they joined together with one voice on January 4 to tell the Trump administration: “No War With Iran!”