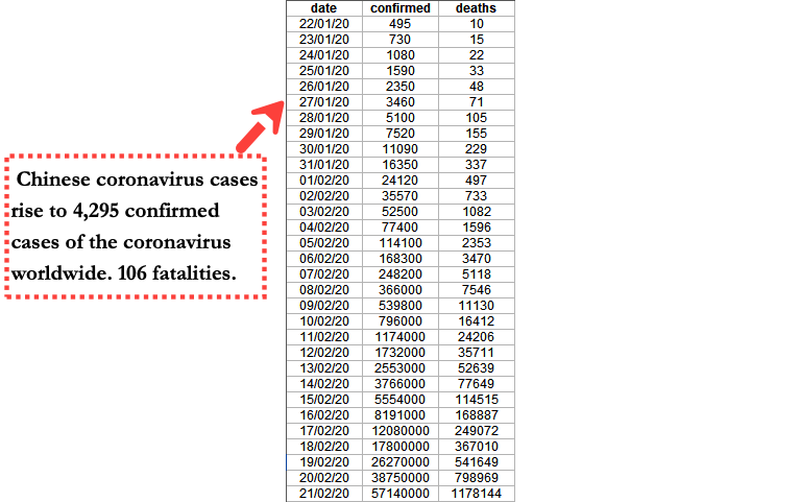 In another major development, state media reports that the first case of coronavirus has been confirmed in Tibet. It was the only region in China with zero confirmed cases, though that streak is now over.

In a disturbing development, three of the Japanese citizens rescued from Wuhan aboard Japan’s evac flight Wednesday have tested positive for cornavirus – so now the Japanese government is essentially importing the virus on the evacuation flight. We hope all those on the flight will be quarantined for a while given the virus’s reputation of spreading asymptomatically.

Here’s a breakdown of all the revisions…

…and here’s a  copy of the announcement from China’s National Health Office, translated into English via Google:

At 04:00 on January 29, 31 provinces (autonomous regions and municipalities) and the Xinjiang Production and Construction Corps reported 1737 new confirmed cases (the first confirmed case in Tibet), 131 new severe cases, and 38 new deaths. (37 cases in Hubei and 1 in Sichuan), 21 new cases were cured and discharged, and 4148 suspected cases were added.

As of 24:00 on January 29, the National Health and Health Commission has received a cumulative report of 7711 confirmed cases, 31 cases of severe cases, 170 death cases, and a total of 170 patients who have been cured and discharged. There were 124 cases with 12,167 suspected cases.

And the updated chart…

In other news, as economists worry about the blowback to China’s already slowing economy, Peter Navarro said late Wednesday that the Trump administration will keep its tariffs in place no matter what happens with the outbreak.

That’s probably why there have been so many rumors about the fraught relationship between Trump and Xi, and reports that Trump never actually spoke with the Chinese leader after claiming that they had discussed the outbreak.

Once again, we’d like to point out that we’re ahead of this supposedly “alarmist” and “fearmongering” model (h/t @abuforlife1):

Update (1720ET): The government in Hubei has announced another slate of cases and deaths.

Meanwhile, 26,632 people are still undergoing medical observation, and another 4,334 cases are still being treated in the hospital. The CDC has just confirmed that it’s sending representatives to China to help suppress the outbreak.