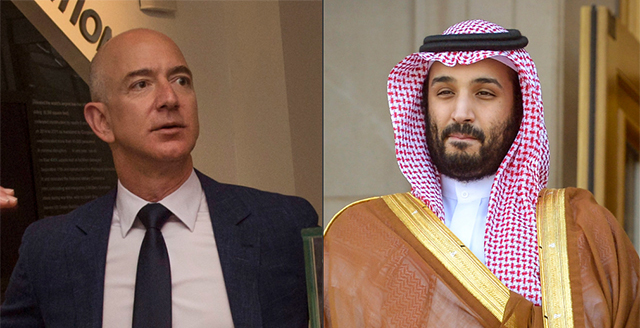 A forensic investigation determined Amazon founder Jeff Bezos was sent malware by Saudi crown prince Mohammed bin Salman through a video file on WhatsApp in 2018, according to a report from the Guardian.

MBS then appears to have worked with the National Inquirer’s David Pecker to blackmail Besoz by threatening to reveal his “d**k pics” and infidelity with Lauren Sanchez.

The motive seems to be that MBS, who has been moving aggressively to ditch Saudi Arabia’s Islamic ways and embrace Western prog-globalism to boost his nation’s riches, was angry that his plans were being undermined by the Washington Post exposing the Saudi’s grizzly murder of Jamal Khashoggi.

The Amazon billionaire Jeff Bezos had his mobile phone “hacked” in 2018 after receiving a WhatsApp message that had apparently been sent from the personal account of the crown prince of Saudi Arabia, sources have told the Guardian https://t.co/XTduN4yOHl

The Amazon billionaire Jeff Bezos had his mobile phone “hacked” in 2018 after receiving a WhatsApp message that had apparently been sent from the personal account of the crown prince of Saudi Arabia, sources have told the Guardian.

The encrypted message from the number used by Mohammed bin Salman is believed to have included a malicious file that infiltrated the phone of the world’s richest man, according to the results of a digital forensic analysis.

This analysis found it “highly probable” that the intrusion into the phone was triggered by an infected video file sent from the account of the Saudi heir to Bezos, the owner of the Washington Post.

The two men had been having a seemingly friendly WhatsApp exchange when, on 1 May of that year, the unsolicited file was sent, according to sources who spoke to the Guardian on the condition of anonymity.

Large amounts of data were exfiltrated from Bezos’s phone within hours, according to a person familiar with the matter. The Guardian has no knowledge of what was taken from the phone or how it was used.

[…] Trump and his son-in-law Jared Kushner have maintained close ties with the crown prince despite a US intelligence finding — reportedly with a medium–to–high degree of certainty — that Mohammed bin Salman ordered Khashoggi’s murder.

As a reminder, the now-disgraced ex-CEO of WeWork, Adam Neumann, said that Jared Kushner, Mohammed bin Salman and he himself were the three people who “would save the world.”

The now-disgraced ex-CEO of WeWork reportedly declared in a meeting that three people would save the world: Mohammed bin Salman, Jared Kushner, and himself. https://t.co/7GzDCMuOR9

Neumann received billions in funding for his Ponzi scheme-esque business and was bailed out by SoftBank, which received tens of billions of dollars from Saudi Arabia’s sovereign wealth fund.