When MSNBC’s Mika Brzezinski accidentally told the truth by informing viewers that the liberal establishment media believes it is their “job” to control what people think, many ignored it as another MSNBC pundit bloviating, yet it perfectly encapsulated what the American media thinks about it’s viewers.

Throughout the past few years, that MSM mindset has become more and more obvious, as has their utter disdain for any American that disagrees with their liberal ideology.

We have seen the media bring on guests that call half of America “racist,” or a “Nazi” just because they belong to the opposing political party. We have shown MSM hosts allow panel members to compare Republicans and conservatives to rapists. The list of proof that the media utterly despises half of America is pages long, but recently we have seen one of the best examples from CNN’s Don Lemon, the “dumbest man on television,” as he has been dubbed by President Trump, and his small panel of guests. Those guests included a little-known NYT employee and a NeverTrumper.

For the sake of clarity, NeverTrumpers are people that call themselves “conservative,” claim to be Republicans, but are actually establishment RINOs (Republicans In Name only), most on record as being willing in 2016 to vote for Hillary Clinton because their Trump Derangement Syndrome only allows them to understand “ORANGE MAN BAD!” 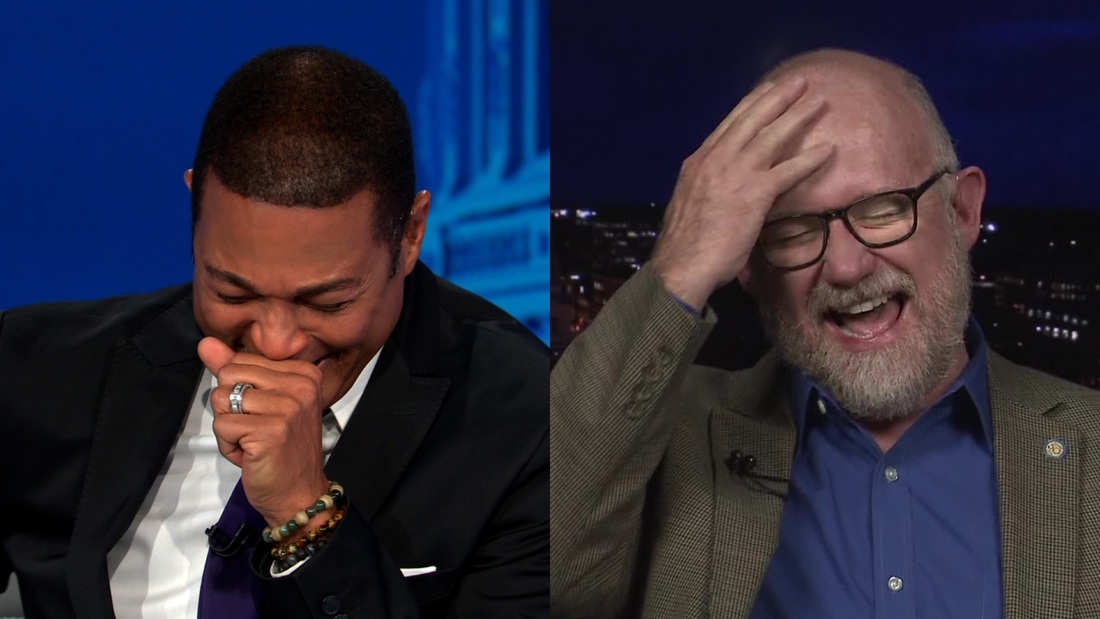 On Saturday, Lemon, Wilson and the New York Times op-ed writer Wajahat Ali, mocked President Trump, then went on to insult Trump supporters, half the nation,  regarding everything from their accents to their being “credulous boomer rubes,” while Lemon spent the entire time giggling like a little school girl.

“[Pompeo] also knows deep within his heart that Donald Trump couldn’t find Ukraine on a map if you had the letter U and a picture of an actual physical crane next to it,” Wilson began, causing Lemon to chuckle. “He knows that this is, you know, an administration defined by ignorance of the world. And so that’s partly him playing to the base and playing to their audience. You know, the credulous boomer rube demo that backs Donald Trump.”

As Lemon began crying with tears of laughter, Wilson went on to depict what he thought a typical Trump supporter sounded like.

“‘Donald Trump’s the smart one — and y’all elitists are dumb!'” Wilson said with a heavy southern accent.

“‘You elitists with your geography and your maps- and your spelling!'” Ali chimed in during the mockery.

“‘Your math and your reading!'” Wilson added. “‘All those lines on the map!'”

The CNN anchor almost lost his breath from laughing, wiping tears from his eyes with a tissue.

While the segment aired on Saturday, with the dwindling CNN audience being what it is, it didn’t go viral for a couple days , as Lemon, Wilson and Ali started receiving backlash for their manner and behavior.

It was posted on Twitter by former CNN digital producer Steve Krakauer, who brutally took them down a few notches by stating “The arrogance, the dismissiveness, the smug cackling, the accents,” Krakauer reacted. “If Donald Trump wins re-election this year, I’ll remember this brief CNN segment late one Saturday night in January as the perfect encapsulation for why it happened.”

DON LEMON BEING SUED FOR SEXUALLY ASSAULTING A MAN

There are a number of issues to unpack here, so we will start with Lemon himself. His disdain and contempt for conservative Americans, unless they are Trump haters, has made him the target of President Trump and  conservatives previously, but he also has some serious issues, legally, that he is facing.

Lemon, who is openly gay, is in the midst of fighting a lawsuit against him by a man that said Lemon “put his hand down the front of his own shorts, and vigorously rubbed his genitalia, removed his hand and shoved his index and middle fingers into Plaintiff’s mustache and under Plaintiff’s nose,” according to the lawsuit, filed Aug. 11, 2019 in Suffolk County Court.

While Lemon denies the incident, which happened in a public place, he still offered a six-figure settlement to make the issue go away, but talks broke down and Lemon’s alleged victim filed suit against him.

Next, CNN itself, a network that has seen their viewership tank over the past three years because they have become ‘hate Trump all the time’ network, and people eventually get sick and tired of listening to a broken record, certainly isn’t doing their ratings any favors with this type of classless rhetoric.

Sr. Political Analyst for Fox News, Brit Hume, highlighted that point succinctly, tweeting “Interesting behavior from a network in serious need of viewers,” along with the a link to the Daily Caller piece about this, titled “It Took This CNN Panel Just 80 Seconds To Show What They Really Think Of Trump Voters.”