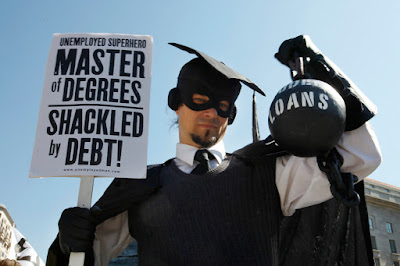 Diabolically as well, one of the primary reasons President Obama wanted his administration to seize control over the student loan program was to be able to provide unlimited money to millennials at a time when the nation was deep in recession following the 2008 financial crash.  Because by providing an outlet for young Americans to ‘hide out’ on campuses instead of potentially protesting in the streets because there were few available jobs, Obama was able to easily make it through any potential crisis that might have taken place while the central bank was infusing the financial system with tens of trillions of dollars in QE.

Unfortunately, the natural laws of artificially expanding the money supply this way (via the Fed and the Federal budget) had some very real repercussions in two areas of the economy.  First, because the student loan program suddenly expanded in scope to individuals to be able to borrow much more than in the past, universities seized upon this government underwriting by escalating tuition’s and fees to astronomical levels.  Thus where a decade prior a student may have left college with less than $30,000 in debt, that number skyrocketed to well over $100,000.Secondly, the advent of the Affordable Care Act (Obamacare) precipitated the same thing in the medical industry as costs also skyrocketed, and premiums for Obamacare insurance took nearly 20% of many Americans paychecks.However at least for those Americans who’s debt was tied to overwhelming medical costs, there was always the option of bankruptcy to be able to get out from under the burden of their massive obligations.  But for those who’s debts were tied to student loans, there was little recourse as Congress had skewed the laws against them to be able to use bankruptcy as a viable safety net.Until now?But on January 7, 2020, a New York judge ruled that the $221,385.49 in student loan debt owed by Rosenberg as of November 2019 was dischargeable under chapter 7 bankruptcy. “I have a chance now to have a life,” the 46-year-old Rosenberg told Yahoo Finance in an interview. A bankruptcy expert told Yahoo Finance that Rosenberg’s case is a watershed in that it dispels the notion that student loans were not dischargeable in bankruptcy. – Yahoo Finance

For what appears to be a first in the more than 40 years of government intrusion over bankruptcy laws, a judge has ruled against that the legislative branch by putting a crack into a system that has ‘enslaved’ a generation of Americans under the weight of nearly unpayable debts.

Sadly for most millennials, knowledge of how their student loan debts have hampered their abilities to experience the American Dream has been understood for more than a decade by the very same government who helped create their situations.  And while some Democratic Presidential candidates like Bernie Sanders and Elizabeth Warren pander to millennials by promising that the government will erase their debts if they get voted into office, the reality is that most political promises never manifest the way they think, and instead their best option may be in this small innocuous court ruling early here in 2020.