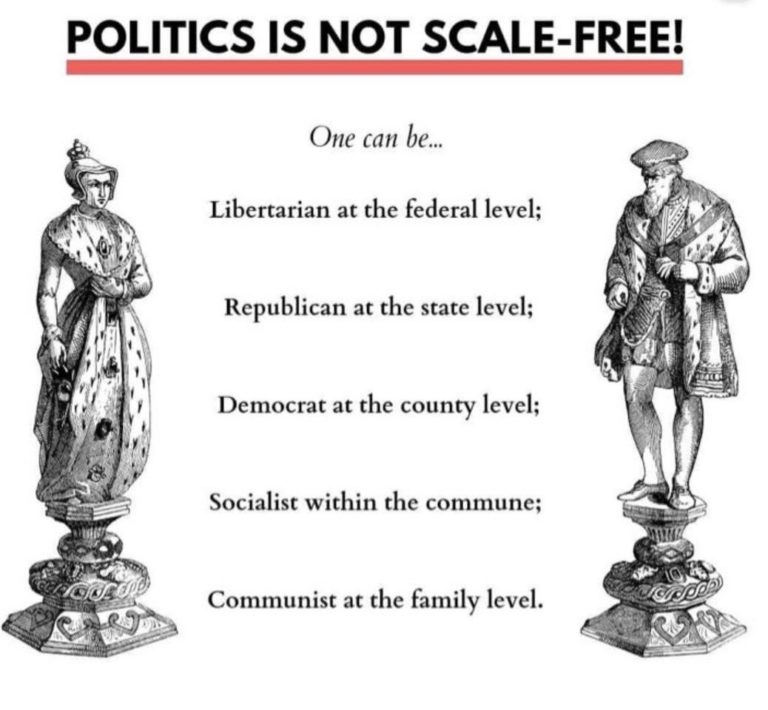 Today’s post will outline a framework through which I’ve come to view politics, as well as life in general. It will identify and examine various units of sovereignty as they exist in the contemporary U.S., since that’s the political system I’m most familiar with. Nevertheless, the overall framework should prove useful to people living all over the world.

Let’s start from the beginning. The most basic and meaningful unit of sovereignty is the individual, followed by the family, the municipality/county, the state (California, New York, Texas, etc) and finally the federal government (Washington D.C.). It’s my view that within a healthy society the scope of governance should decline as you add more and more individuals to the mix. It’s at the most basic unit of sovereignty (the individual), where authority over most of life’s decisions should reside. This runs the gamut from the really big decisions, such as what sort of work to do, who to marry, what religion (if any) to believe in; to the completely mundane, such as what to eat for breakfast.

As a person starts to add more members to their daily life in the form of a family (spouse and children), a wide range of complexities are added to the equation which call for a more expansive approach to individual agency. You suddenly find yourself sharing an intimate existence with people who are not you, and who’ll invariably have conflicting views on a wide variety of subjects, both significant and trivial. Compromise becomes necessary in the pursuit of a harmonious coexistence amongst spouses, as well as within the larger family unit, and you start to relinquish a certain degree of individual sovereignty.

It’s important to note that the creation of a family by consenting adults tends to be a voluntary choice by which individuals agree to put some of their more selfish proclivities to the side in order to create a cohesive, expansive unit. Since the decision to form a family is in most cases voluntary, the decision to relinquish some measure of individual sovereignty is likewise voluntary. While it’s not romantic to consider the transition from an individual-centric lifestyle to a family-focused one in the context of politics and governance, it can be quite helpful.

After the family, the next major unit of sovereignty is found at the municipal or county level. At this stage, a significantly larger number of humans have been added to the structure, ranging from thousands to millions depending on where you live. Unless you reside in the smallest of towns, this unit will consist of countless people you don’t personally know and never will. Nevertheless, a common geography will almost always lead to some level of coordination and decision-making for stuff that applies to and affects the larger unit.

What this means in practice should be determined by those living in the communities themselves. As anyone who’s travelled extensively around the U.S. knows, distinct cities and counties tend to have very different vibes and attitudes about all sorts of life issues, and in some cases counties bordering one another even within the same state demonstrate dramatic differences. It’s important to accept this as perfectly normal and healthy, just as two neighboring families can have distinct views on all sorts of issues and still get along just fine. Each family runs their affairs as they deem appropriate.

Moving further up the scale, political units beyond the municipality/county level in the U.S. consist of the 50 states. This is where things start getting far more complex, as you begin adding millions if not tens of millions of additional people of very diverse opinions and geography under the umbrella of a much larger governance structure. In the case of the U.S., some of these states are as large, in terms of population and economy, as entire countries. After that, there’s the dreaded federal government, which covers an unwieldly large and diverse political unit of 325 million people.

It seems one major source of our current problems stems from an improper understanding and delegation of sovereignty along the scale of our existing political units. For example, as you move up the scale from individual, to family, to city/county, then state and finally country, you add more and more people as well as geography, and the bonds become more complex and impersonal. The political relationships also tend to become less voluntary as you move up the scale, which is meaningful. For example, it’s relatively easy and common to get up and move from one city to another, but changing national citizenship is a major ordeal which most people never consider let alone consummate.

The nature of sovereignty and politics under this framework is that as the unit expands to more individuals, some degree of individual sovereignty is relinquished each step of the way. Equally significant, is as the units grow the voluntary nature of the relationship starts to fade. Since a political unit becomes less voluntary as it scales, the larger the unit, the less authority it should have to exercise political power in relation to the smaller, more voluntary units. Does anyone reading this actually think they have as much capacity to first understand the issues and then impact decision making in Washington D.C. as they do at the local level? As political relationships become less voluntary and fluid (lack of clear exists), the proper scope of governance should decline.

Specifically, whatever can be done at the municipal/county level, should be done at the municipal/county level, with the larger state only chiming in when it’s absolutely necessary for decisions that require larger scale coordination. This same principle should be applied to the relationship between the states themselves and Washington D.C. What requires no input or assistance from the country-level political unit should be left to the smaller units as appropriate. Only the small number of issues that require national coordination should be considered at the country level, and even then there should be direct input from the smaller units in the form of referendums.

The men whom the people ought to choose to represent them are too busy to take the jobs. But the politician is waiting for it. He’s the pestilence of modern times. What we should try to do is make politics as local as possible. Keep the politicians near enough to kick them. The villagers who met under the village tree could also hang their politicians to the tree. It is terrible to contemplate how few politicians are hanged.”

The spirit of the U.S. Constitution is based upon this general idea, though I place more emphasis on the municipal/county level vs. the states. A good example of the proper role of the federal government as outlined in the founding document is the Bill of Rights. These consist of what are seen as inalienable individual rights that should never be infringed upon across the country irrespective of where you reside within the smaller political units. The principle here isn’t to create a structure whereby Washington D.C. is in charge of micromanaging the everyday lives of people across the land, but rather the opposite. It’s a principle aimed at preventing the micromanagement of individual sovereignty by making certain core rights unassailable.