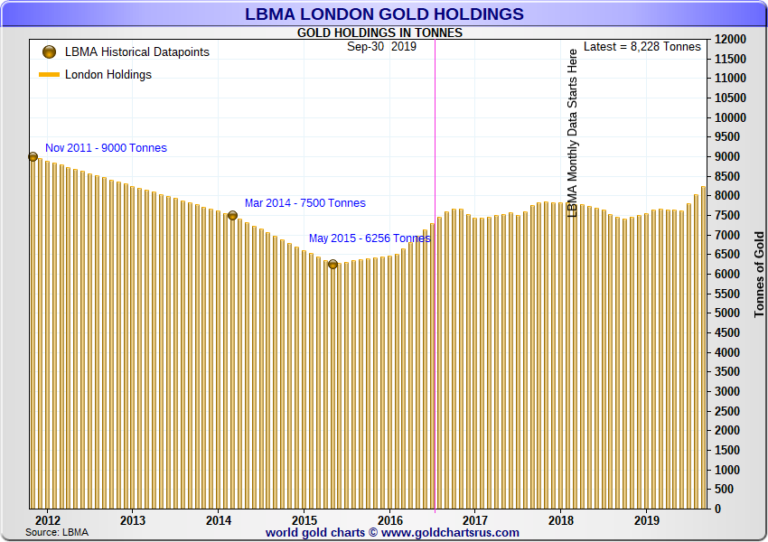 According to a press release this week from bullion bank controlled industry group the London Bullion Market Association (LBMA), the total amount of gold held by combined LBMA commercial vaults and Bank of England vaults in London hit a record 8,228 tonnes as of the end of September 2019. This, says the LBMA, equates to 658,274 wholesale market gold bars (London Good Delivery gold bars) valued at approximately US $392.9 billion.

Given that LBMA monthly London vaulted gold holdings data is published on a 3-month lagged basis and was first published in July 2017 (with initial data going back to July 2016), the “record high” of London vaulted gold that the LBMA is referring to here is in terms of the 3.5 years since the LBMA made monthly vaulting data public from July 2016 onwards, i.e. the pink line in the chart below.

But because neither the LBMA’s nor the Bank of England’s reported London gold holdings figures have ever been independently audited, none of this data can be independently verified. The LBMA does not even publish where the gold vaults it refers to are actually located, so immediately you can see a large problem with transparency and verification.

According to the LBMA, its gold vaulting data reflects gold held by seven LBMA member commercial vault providers at their subterranean vaults in London, as well as gold held for central banks and bullion banks at the Bank of England’s London vaults. Of the seven commercial vault providers, three of these are bullion banks (JP Morgan, HSBC and ICBC Standard), with the other four being security carriers (Brinks, Malca-Amit, G4S and Loomis).  From analysis, princupally at BullionStar, we know that the LBMA gold vaults are located in the City of London, such as the vaults of JP Morgan and possibly HSBC, or in west London near Heathrow Airport, such as the vaults of Malca-Amit, Brinks (Radius Park), and G4S and Loomis.

Looking at the latest Bank of England total vaulted gold as of month-end September 2019, the Bank claims to have been holding a combined 5152 tonnes of gold in its vaults. Which in turn means that excluding the Bank of England vaults, the LBMA commercial and bullion bank vaults claim to have been holding 3076 tonnes of gold as of 30 September 2019. The LBMA points out in its latest press release that the ratio of gold (said to be) held at the Bank of England vaults compared to gold (said to be) held at the LBMA commercial vaults has fallen to 1.67 as of month-end September 2019, a new low since the dataset began, and notably lower than the ratio was a year earlier in September 2018 when it sat above 2.25.

The reason this ratio has fallen is that, according to the London gold holdings data, while the LBMA bullion bank and commercial vaults added about 775 tonnes since end of September 2018, an incredible 621 tonnes of which was added between July 2019 and September 2019 alone, the Bank of England gold vault holdings were relatively flat over the same period, having lost about 215 tonnes in the 9 months from September 2018 to June 2019, before adding back about 190 tonnes between July and September 2019.

But where did this extra gold appearing in London’s vaults come from? In the case of the commercial vaults, the answer is that a lot of this gold was imported into the UK which in practice means imported into London. This is clear from UK gold import and export data for 2019 which captures cross-border non-monetary gold flows, and where over July, August and September 2019, more than 200 tonnes of gold arrived into London in each of those months, much of this gold from Switzerland but also from the US, Canada, Australia and South Africa.

For example in September 2019, London imported about 40% of that month’s 200 tonnes of imports from Switzerland, another 40% from Australia, Canada and the US, and the bulk of the remainder from South Africa, Hong Kong and Germany. While US, Canada, Australia and South Africa are major gold producing countries and traditional exporters of gold to London (see above chart), Switzerland,  Hong Kong and Germany are not, except when cross-border gold flows change direction if the London gold market needs supplying, as happened in the third quarter 2019.

Some of the additional gold flowing into the London commercial vaults during Q3 2019 can be accounted for as additions to gold-backed Exchange Traded Funds (ETFs), many of which store their gold in these LBMA London gold vaults. For example, the SPDR Gold Trust (GLD) and Blackrock Gold Trust (IAU), which have their gold custodied in the London vaults of HSBC and JP Morgan respectively, saw substantial inflows of gold during Q3, with GLD adding more than 120 tonnes of gold (see chart below) and IAU adding about 50 tonnes.

The same was true across the board with the London gold holdings of other large gold-backed ETFs operated by ETFS, Source and Deutsche Bank all showing a noticeable increase over Q3, bringing the total amount of ETF gold stored in London LBMA vaults at the end of September 2019 to a whopping 1903 tonnes. See chart below.

Armed with the figures for total gold held in London vaults (8228 tonnes) and total gold held at the Bank of England vaults (5152 tonnes), we therefore know that 3076 tonnes of gold was held in the LBMA commercial vaults as of the end of 30 September 2019. But with 1903 tonnes of this total consisting of ETF stored gold, this means that only 1173 tonnes of gold in these LBMA vaults was unconnected to ETFs. In other words, the LBMA bullion bank gold float to support the entire London Gold Market was only 1173 tonnes, which is only about 0.5% of total above ground global gold stocks.