Just a friendly heads-up to all the Bulls bowing and murmuring prayers to the Golden Idol of the Federal Reserve: the Fed just slashed its balance sheet–yes, reduced its assets. After panic-printing $410 billion in a few months, a $24 billion decline isn’t much, but it does suggest the Fed might finally be worrying about the reckless, insane bubble it inflated: 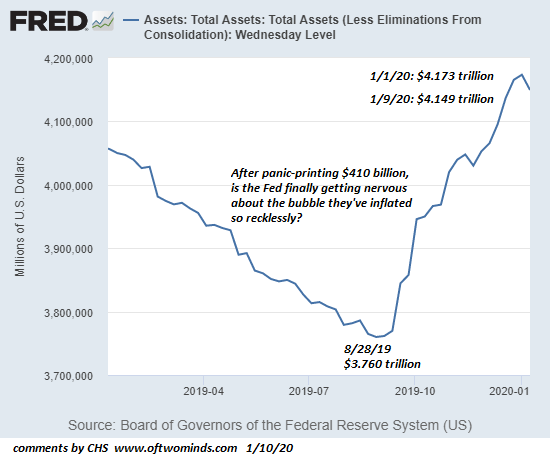 Just to review the numbers, which you can ponder on this chart from the St. Louis Federal Reserve (FRED).

But also note that the Fed only added a paltry $8 billion in the final week of 2019. Given the hundreds of billions of expansion being promised, this works out to a monthly run-rate of around $30 billion–not quite the $60 billion promised as a baseline, or the $100 billion per month panic-printed in Q4 2019.

While all the faithful were busy bowing to the Fed’s mesmerizing Golden Idol, maybe the mortals in the Fed awakened from their dreams of omnipotence and realized that their “insurance against a recession” panic-printing had inflated the mother of all manic-mania bubbles.

Perhaps even PhD economists notice that manic-mania bubbles always burst–always. And just before they burst, devastating all those worshiping the Fed’s Golden Idol, pundits always declare “this time it’s different,” “the Fed has our back,” “stocks have reached a permanently high plateau,” “stocks have plenty of room to run higher,” and other platitudes mumbled by the Fed faithful.