by Brandon Turbeville, The Organic Prepper: 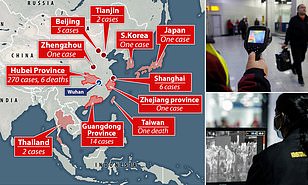 Year after year, the world’s public is subjected to a fear campaign surrounding some frightening disease, from Zika virus to Ebola. Each year Western audiences, in particular, are browbeaten with fear over a disease that, one year later, is scarcely remembered. What is remembered, however, is the reaction of federal, local, and state governments and the ever-growing authoritarian “solutions” provided.

The solutions always take the form of “discussions” over even greater violations of individual rights, forced vaccination, dislocation, forced quarantine, and medical tyranny.

This year’s disease is coronavirus, a SARS-like upper respiratory illness that has allegedly killed over 40 people in China and is allegedly popping up all over the world, including here in the United States.

For the purpose of this article, we will leave aside questions of how this virus suddenly appeared, its origins, real dangers, and how it is spreading so fast. Assuming that the threat of coronavirus is real, there are a number of solutions to the festering pandemic that are acutely being ignored.<

Travel bans from affected areas, greater screening at airports and other national access points, particularly the U.S./Mexico border have all been largely ignored until recently. A comprehensive policy of treatment and containment of the disease that does not entail the implementation of martial law and the violation of Constitutional rights also appears to be nonexistent.

Yet there is also a more long term set of solutions that must be implemented in order to prevent the disease from spreading and to prevent its appearance in the first place. The end of austerity, the rebuilding of economic opportunity, access to proper nutrition, and the progress and development of the American health system are all essential to treating and preventing coronavirus and outbreaks from diseases like it.

Throughout history, plagues and disease epidemics can be traced directly to austerity, low living standards, and/or poor sanitation conditions often coupled with inadequate nutrition and lack of available treatment. War and periods of struggle are also precursors to epidemics.

Any one of these conditions can themselves beget plague and disease. Yet, when taken together, they are a recipe for devastation and plague. There are numerous examples of the connections between lower living standards and the decline of public health throughout history. To comment on all of them would be outside of the scope of this article. However, a few of these parallels must be drawn.

When discussing the emergence and ramifications of mass plague, one cannot avoid discussion of the Bubonic Plague or Black Plague/Black Death. Indeed, anytime there is the consideration of an epidemic that threatens to become massive in scale and even a pandemic, discussions of the Black Plague rise back to the surface. Although usually presented by mainstream outlets and medical propagandists as an example of what happened to a primitive people in a time before drugs and vaccines as well as the possible consequences of the lack of total fealty to the medical establishment today, the Black Plague had its roots in much more basic and wide-reaching sources than mere medical treatment options.

We have a tradition to draw on that goes back in the Western World to the 1340s. And it was in the 1340s that this pandemic called the Black Plague began to come into southern Europe, the Mediterranean ports, coming from the Levant, coming from the eastern Mediterranean and coming from further in the far east. And you have to also bear in mind that, in order to have a pandemic, it really takes two ingredients as I see it anyway. One is you have to have the contagion. You have to have the virus or the bacterium or whatever it is. On the other hand, you’ve got to have conditions. And the conditions can be situations of bad sanitation, no water available, no sewage drainage, no adequate systems in that regard. And then you’ve also got to look at the nutrition. You’ve got to look at the physical state of the human subjects involved.

And I can say that, in the 1340s, the thing that we see in the 1300s as they go along is the effects of an austerity policy. It is the domination of the Mediterranean basin by Venetian and Genoese bankers and the kinds of usury that they imposed on the rulers – the kings or princes or other potentates – which requires then an increased pressure on sharecroppers on farmers and others leaving them with less and less of their food crops to devote to nutrition and more and more of it being sold off elsewhere as a cash crop.

Certainly Europe met the requirements Tarpley sets forth in terms of lack of adequate nutrition, poor sanitation standards, lack of available clean water, and persistent sewage issues. Austerity clearly was a factor as was the factor in the overall stress of the population struggling to survive under these conditions. What is also notable is the presence of war as a stressor and contributing factor to plague and disease. Shortly before and especially during the peak years of the Black Plague, Europe was embroiled in numerous wars. In fact, the state of Europe during this period was one of continual warfare. In addition, Europe as a whole and France, in particular, were bombarded by famine in the years leading up to the appearance of the Black Plague.

Likewise, the 1918 Spanish Flu that killed millions of people worldwide came on the heels of World War 1 which left many places in the world ravaged with destruction, famine, and vastly reduced living standards. The high use of chemical weapons, particularly those which affect the human immune system,[1] also played a part in the virulent spread of the Spanish Flu. Although many theories have been proposed regarding the source of the pandemic (including the possibility that it was created on a military base in Kansas), it is without a doubt the living conditions of the world that provided a fertile ground for its spread and severity.

With this in mind, however, it is important to take a look at the conditions in which we find ourselves in the present day with respect to pandemics or, at the very least, the possibility of pandemics.

The United States and the world finds itself in an economic depression. For some countries, particularly the United States, living standards have been vastly reduced compared to those which previous generations have experienced. While technology may have advanced, the applications of that technology in most areas other than entertainment have been intentionally withheld from general society. It is also true that the economy has been doing better in 2020 than it was in 2015 and 2016. This is directly attributable to the Trump administration’s application of minor elements of the American System of economics (tariffs, etc) and the threat of more protectionist policies. But, while the United States economy is undoubtedly doing better than four years prior, it is a shell of its former self.

Nevertheless, it is also an unfortunate fact that some parts of the world have never had high living standards to lose. Whenever the West catches a cold, Africa catches pneumonia. The Middle East is in the process of being destroyed and Asia remains a pit of slave labor, crowded living conditions, and inadequate infrastructure.

In terms of the possibility of a pandemic and susceptibility to disease, the world, after years of war and decades of “free trade” and globalization, the lowering of their living standards, increasing pollution, and de-industrialization, as well as the prevalence of GM food, chemical toxicity, immune system destroying vaccines, chemtrails, processed foods, and other chemical poisonings and contributors to weakened immunity, the United States, has left itself vulnerable to a number of potential pandemics and illnesses.

So, generally speaking, I would say, after twenty years of globalization, which is a form of austerity, it’s a form of International Monetary Fund shock therapy for the world, the vulnerability of humanity to new pandemic disease is large. I don’t know how large. It’s very difficult to get statistics. We can simply estimate that, in the United States, we’ve had several years now of austerity. If you look at southern Europe, you certainly have to say that Portugal, Spain, Greece, Ireland, Italy, some other places – these places have undergone brutal austerity and their vulnerability to pandemics is increasing. And that certainly includes war zones. Imagine what Syria is like today. Imagine what Iraq is like. Imagine what Lebanon is like as a result of these austerity policies. So we’ve got I think a very very dangerous mix.

Improvements in sanitation and access to nutrition/good food reduce disease

The question of the relationship between austerity, low living standards, and disease is not merely a philosophical supposition, it is at the heart of the matter. In other words, the answer to disease prevention is not found in vaccines, drugs, or police states, it is found in greater standards of living, cleaner water, better sanitation, sewage treatment, clean air, non-poisonous foods, and adequate access to nutrition.

Indeed, the connection between the reduction in diseases and the improvements in public health over the last 150 years to the development of vaccines has been thoroughly debunked. Indeed, the idea that vaccines are even safe and/or effective has likewise been revealed as a tragic deception.