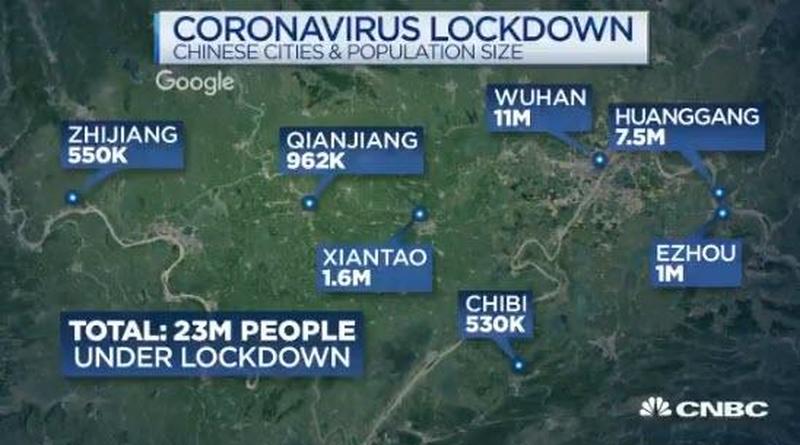 “Make no mistake: This is an emergency in China,” Tedros said. “But it has not yet become a global health emergency. It may yet become one.”

Update (1325ET): The World Health Organization, after a second day of meetings, have decided AGAINST declaring an international virus alarm. The panel was reportedly split on the decision and may revise the decision but for now states that “now is not the time” to declare an emergency.

“Make no mistake: This is an emergency in China,” WHO Director-General Tedros Adhanom Ghebreyesus said. “But it has not yet become a global health emergency. It may yet become one.”

Update (1300ET): CNBC’s Eunice Yoon just provided a shocking update to the status of the deadly virus in China:

“7 cities and 23 million people are effectively under quarantine.”

The cities under effective martial law – with all travel in, around, and out halted – are Wuhan, Huanggang, Zhijiang, Ezhou, Qianjiang, Chibi, and Xiantao.

CNBC’s @onlyyoontv breaks down what’s happening on the ground in China with the coronavirus spreading on @CNBCTheExchange . What cities are closed, how many people are impacted, the precautions they’re taking and the huge impact on the Lunar New Year. pic.twitter.com/YFEHjQP0Cy

That is more people quarantined than the population of Florida (21.6m).

Outside of China, cases keep appearing (map does not include recent cases in Scotland and Ireland):

Update (1150ET): If you haven’t cancelled those tickets to Wuhan yet, you might want to hold off: The State Department has just reverted its safety warning on travel to China to “exercise caution” from “reconsider your travel plans”.

Clearly, somebody in the Chinese government complained, and with US stocks deep in the red, it seems the Trump Administration was perceptive.

After all, the point is to convince the public not to panic.