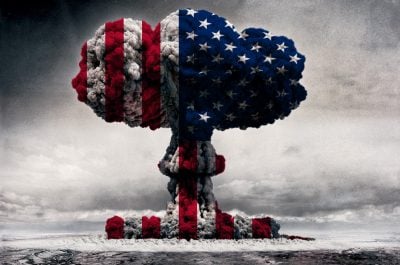 The following  text was presented at the Society for the Defense of Civil Rights and Human Dignity (GBM), Berlin, 10-11 December, 2003 and Humboldt University, Berlin, 12 December 2003.

Written 16 years ago in the wake of the US-led invasion of Iraq (March-April 2003), the article identifies “the next phase of the US led war”, including Washington’s longstanding intent to wage war on Iran. It also focusses on Tel Aviv’s plan to “create a Greater Israel” which is tantamount to destroying Palestine.

It addresses the issue of “False Flags” and the role of the media in spreading war propaganda.

Sixteen years later, America’s hegemonic military agenda has reached a dangerous threshold: The assassination of  IRGC General Soleimani ordered by Donald Trump on January 2, 2020 is tantamount to an Act of War against Iran.

US Defense Secretary Mark T. Esper described it as a “decisive defensive action” while confirming that the operation ordered by Donald Trump had been carried out by the Pentagon. “The game has changed” said Defense Secretary Esper.

How to reverse the tide of war?

Forcefully undermine the media propaganda apparatus which seeks to justify “humanitarian wars” under the banner of responsibility to protect (R2P).

Impeach all criminals in high office including POTUS as well the entire Congressional apparatus which pays lip service to US led wars.

How to Restore Democracy?

“To reverse the tide of war, military bases must be closed down, the war machine (namely the production of advanced weapons systems like WMDs) must be stopped and the burgeoning police state must be dismantled. More generally we must reverse the “free market” reforms, dismantle the institutions of global capitalism and disarm financial markets.

The struggle must be broad-based and democratic encompassing all sectors of society at all levels, in all countries, uniting in a major thrust: workers, farmers, independent producers, small businesses, professionals, artists, civil servants, members of the clergy, students and intellectuals.

The antiwar and anti-globalisation movements must be integrated into a single worldwide movement. People must be united across sectors, “single issue” groups must join hands in a common and collective understanding on how the New World Order destroys and impoverishes.” (M. Chossudovsky, December 2003) 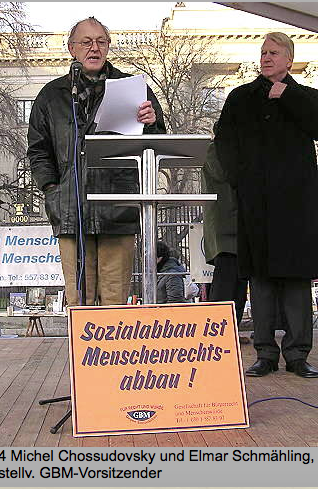 We are at the juncture of the most serious crisis in modern history.

The Bush Administration has embarked upon a military adventure which threatens the future of humanity.

The wars on Afghanistan and Iraq are part of a broader military agenda, which was launched at the end of the Cold War. The ongoing war agenda is a continuation of the 1991 Gulf War and the NATO led wars on Yugoslavia (1991-2001).

The post Cold War period has also been marked by numerous US covert intelligence operations within the former Soviet Union, which were instrumental in triggering civil wars in several of the former republics including Chechnya (within the Russian Federation), Georgia and Azerbaijan. In the latter, these covert operations were launched with a view to securing strategic control over oil and gas pipeline corridors.

US military and intelligence operations in the post Cold War era were led in close coordination with the “free market reforms” imposed under IMF guidance in Eastern Europe, the former Soviet Union and the Balkans, which resulted in the destabilization of national economies and the impoverishment of millions of people.

The World Bank sponsored privatization programmes in these countries enabled Western capital to acquire ownership and gain control of a large share of the economy of the former Eastern block countries. This process is also at the basis of the strategic mergers and/or takeovers of the former Soviet oil and gas industry by powerful Western conglomerates, through financial manipulation and corrupt political practices.

In other words, what is at stake in the US led war is the recolonization of a vast region extending from the Balkans into Central Asia.

The deployment of America’s war machine purports to enlarge America’s economic sphere of influence. The U.S. has established a permanent military presence not only in Iraq and Afghanistan, it has military bases in several of the former Soviet republics on China’s Western frontier. In turn, since 1999, there has been a military buildup in the South China Sea.

War and Globalization go hand in hand. Militarization supports the conquest of new economic frontiers and the worldwide imposition of “free market” system.

The Next Phase of the War

The Bush administration has already identified Syria as the next stage of “the road map to war”. The bombing of presumed ‘terrorist bases’ in Syria by the Israeli Air Force in October was intended to provide a justification for subsequent pre-emptive military interventions. Ariel Sharon launched the attacks with the approval of Donald Rumsfeld. (See Gordon Thomas, Global Outlook, No. 6, Winter 2004) 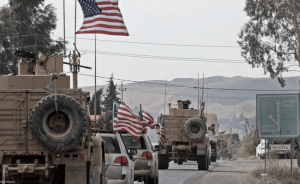 This planned extension of the war into Syria has serious implications. It means that Israel becomes a major military actor in the US-led war, as well as an ‘official’ member of the Anglo-American coalition.

The Pentagon views ‘territorial control’ over Syria, which constitutes a land bridge between Israel and occupied Iraq, as ‘strategic’ from a military and economic standpoint. It also constitutes a means of controlling the Iraqi border and curbing the flow of volunteer fighters, who are traveling to Baghdad to join the Iraqi resistance movement.

This enlargement of the theater of war is consistent with Ariel Sharon’s plan to build a ‘Greater Israel’ “on the ruins of Palestinian nationalism”. While Israel seeks to extend its territorial domain towards the Euphrates River, with designated areas of Jewish settlement in the Syrian heartland, Palestinians are imprisoned in Gaza and the West Bank behind an ‘Apartheid Wall’.

In the meantime, the US Congress has tightened the economic sanctions on Libya and Iran. As well, Washington is hinting at the need for a ‘regime change’ in Saudi Arabia. Political pressures are building up in Turkey.

So, the war could indeed spill over into a much broader region extending from the Eastern Mediterranean to the Indian sub-continent and China’s Western frontier.

The “Pre-emptive” Use of Nuclear Weapons

Washington has adopted a first strike “pre-emptive” nuclear policy, which has now received congressional approval. Nuclear weapons are no longer a weapon of last resort as during the cold War era.

The US, Britain and Israel have a coordinated nuclear weapons policy. Israeli nuclear warheads are pointed at major cities in the Middle East. The governments of all three countries have stated quite openly, prior to the war on Iraq, that they are prepared to use nuclear weapons “if they are attacked” with so-called “weapons of mass destruction.” Israel is the fifth nuclear power in the World. Its nuclear arsenal is more advanced than that of Britain.

Barely a few weeks following the entry of the US Marines into Baghdad, the US Senate Armed Services Committee gave the green light to the Pentagon to develop a new tactical nuclear bomb, to be used in conventional war theaters, “with a yield [of up to] six times more powerful than the Hiroshima bomb”.

Following the Senate decision, the Pentagon redefined the details of its nuclear agenda in a secret meeting with senior executives from the nuclear industry and the military industrial complex held at Central Command Headquarters at the Offutt Air Force Base in Nebraska. The meeting was held on August 6, the day the first atomic bomb was dropped on Hiroshima, 58 years ago.

The new nuclear policy explicitly involves the large defense contractors in decision-making. It is tantamount to the “privatization” of nuclear war. Corporations not only reap multibillion dollar profits from the production of nuclear bombs, they also have a direct voice in setting the agenda regarding the use and deployment of nuclear weapons.

Meanwhile, the Pentagon has unleashed a major propaganda and public relations campaign with a view to upholding the use nuclear weapons for the “defense of the American Homeland.”

Fully endorsed by the US Congress, the mini-nukes are considered to be “safe for civilians”.

This new generation of nuclear weapons is slated to be used in the next phase of this war, in “conventional war theatres” (e.g. in the Middle East and Central Asia) alongside conventional weapons.

In December 2003, the US Congress allocated $6.3 billion solely for 2004, to develop this new generation of “defensive” nuclear weapons.

The overall annual defense budget is of the order of 400 billion dollars, roughly of the same order of magnitude as the entire Gross Domestic Product (GDP) of the Russian Federation.

While there is no firm evidence of the use of mini-nukes in the Iraqi and Afghan war theatres, tests conducted by Canada’s Uranium Medical Research Center (UMRC), in Afghanistan confirm that recorded toxic radiation was not attributable to ‘heavy metal’ depleted uranium ammunition (DU), but to another unidentified form of uranium contamination:

“some form of uranium weapon had been used (…) The results were astounding: the donors presented concentrations of toxic and radioactive uranium isotopes between 100 and 400 times greater than in the Gulf War veterans tested in 1999.” www.umrc.net

The Planning of War

The war on Iraq has been in the planning stages at least since the mid-1990s.