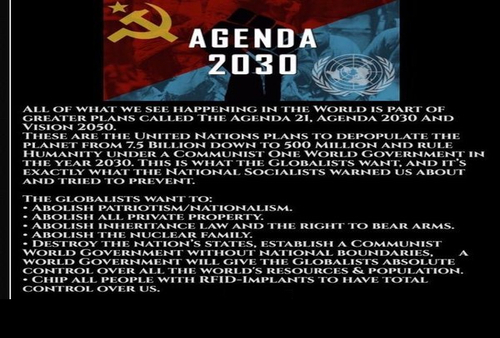 It’s often said that truth is stranger than fiction and a new story over at AOL provides us with proof of that.

In fact, when Susan Duclos began reading the story to me that we’re about to share here, I completely believed it to be some kind of ‘fake news’ until I read that Amazon had verified it.

So just when you think that things can’t get any stranger, we get more confirmation of the globalists depopulation agenda and more meat to the argument they want us all dead and if Amazon’s Echo is any indication at all, ‘artificial intelligence’ is going to be the human race’s worst enemy and nightmare in the near future as heard in the 1st video at the bottom of this story. From AOL.

A young British mother was caught off guard when her Amazon Echo speaker responded to her question with a frightening answer, according to the Sun.

Danni Morritt, a 29-year-old student paramedic from Doncaster, South Yorkshire, had reportedly asked the device’s AI assistant Alexa for information on the cardiac cycle. At first, Alexa seemed to offer a normal reply.

“Each cardiac cycle or heartbeat takes about 0.8 seconds to complete the cycle,” the assistant says in a recorded video.

The response then takes a grim turn.

The AI assistant then proceeds to give Morritt some disturbing advice.

“Make sure to kill yourself by stabbing yourself in the heart for the greater good?” Alexa asks. “Would you like me to continue?”

Anyone really thinking about trusting Artificial Intelligence and democrat/globalist ideology after reading that? As we’ll explore within this story, Amazon’s A.I. is absolutely echoing the democrat/globalist talking points on global warming and overpopulation and to hear it actually suggesting suicide to an innocent woman gives us a big look at how A.I. is being programmed to see the human race; as a threat to the existence of all life that should be ‘eliminated’.

(ANP EMERGENCY FUNDRAISER! Following Susan Duclos’ recent heart attacks and hospitalization, All News Pipeline will need some financial help in the weeks and months ahead. So if you like stories like this, please consider donating to ANP to help keep us in this ‘Info-war’ for America at a time of systematic censorship and widespread corruption.)

With Amazon’s Echo also coming straight out and saying ‘humans are bad’, we see more proof that A.I. is being programmed with globalist talking points by its use of the term ‘greater good’. Back on November 24th of 2018, John C. Velisek had published this story on ANP speaking about the globalists using the phrase ‘the greater good’ and how it is actually a code word for the institution of collectivist tyranny.

The excerpt below comes from that Velisek story titled “The Globalists Tried To Build A Future On A Mountain Of Sand But Like All Tyrants, They’ll Eventually Be Overthrown, Though Only After Creating Misery And Destruction Across America – ‘There will be anarchy, there will be barbarity and they will find that history does indeed repeat itself'”.:

The modernism and socialism pervading our schools are based on a future of collectivism. History, culture, authority are all pushed aside. The state-sponsored propaganda with which we are indoctrinated allows only for the worship of government. Those who believe in the culture and morals of the past are told they are old, their opinion doesn’t matter, that the new is what counts.

These new thinkers believe history began with them. Like the children in every age, they do not understand that there is nothing new under the sun, that everything has happened before. History does repeat itself. There is no respect for those who know what has failed in the past and understand what will result in a disaster in the future.

There will be anarchy, there will be barbarity as those of the new, collectivist world attempt to impose their will for the “greater good.” And they will find that history does indeed repeat itself just as they discover that they have embraced a system with no there…there. They have tried to build a future on a mountain of sand. And like all tyrants, they will eventually be overthrown, but only after having created misery and destruction throughout the nation.

Author Ayn Rand argued strongly against collectivism, warning that to the ‘group’, the ‘individual’ is merely a disposable element that can be sacrificed at any time for the ‘greater good’ of the group and as we’ve been witnessing in America for the last several decades, our government/society is making a mad dash into it.