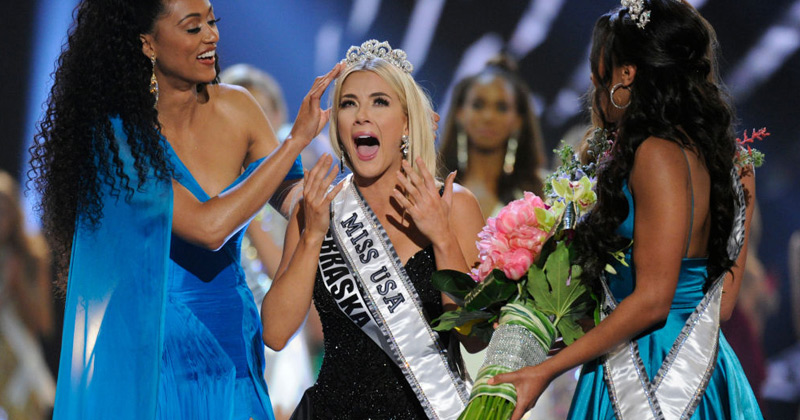 A transgender woman in Oregon has launched a lawsuit against Miss USA pageants after they refused to accept him as a contestant.

Filed on Tuesday, the lawsuit argues the pageant discriminated against 29-year-old Anita Green when it refused to allow him to compete in the Miss Oregon beauty contest.

A Facebook Messenger conversation between Green and the Miss USA Oregon pageant director, obtained by the Willamette Week, captured the moment Green accused the pageant of discrimination.

According to Facebook messages acquired by WW, Green—who works for a video game company—reached out to Smith, asking for more information about the pageant. Smith sent a link with the pageant rules, and after reading them, Green responded, “You know I’m transgender, right?”

“I did not,” Smith wrote back. “Our rules and regulations allow same-sex marriage, however this is a natural pageant.”

Smith then offered to help Green find another pageant. Green asked if Smith would “be willing to change the rules to allow transgender women to compete.”

“Again,” Smith wrote, “we would be happy to help you find a pageant that you qualify for, however at this time we do not anticipate the rules changing.”

“Well,” Green responded, “I’ll talk to my attorney about this then because discrimination is unacceptable. This is clearly discrimination.”

“I am sorry that you feel that way,” Smith replied and ended the conversation. Smith declined WW’s request for comment on the exchange.

The rules on the pageant’s website prohibit contestants who have “posed nude in film or print media,” and state the contest is limited to “natural born females.”

The suit claims that since the pageant is open to the public, the contest’s rejection is similar to a business not wanting to serve Green.

Green also claims his lawsuit is about wanting to give women a voice.

“This is about giving minorities a voice,” he said according to the Willamette Week. “I believe I’m beautiful, and I want to set an example for all women—cisgender and transgender—that beauty doesn’t have to fit into specific molds.”

Green added the pageant’s rejection made him feel “as though I was being invalidated. I felt as though the organization was saying I am not a woman and I’m not woman enough.”