There have been close to $6 billion in gold buyouts the last month.

Coming into tax loss season, it’s time to sharpen your pencils and get your cash ready for opportunities on the horizon.

The deals that happened over the last month should not come as major surprises.

And one massive gold company that I was in early on in the story made major headlines.

Below is a chart which shows the operating mines of Newmont and Barrick. The yellow dots are Newmont, and grey are Barrick. The purple represents joint-ventures between the two companies. 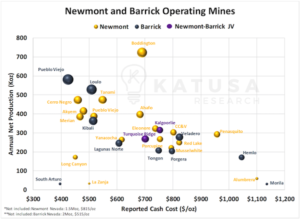 The joint-ventures are the obvious first candidates for companies to sell off or acquire full stakes in.

It shouldn’t come as a surprise that one of Barrick’s first moves was to sell off its 50% stake in Kalgoorlie to Saracen (SAR:ASX) for $750 million.

Saracen is a company I’ve highlighted several times as part of the Australian miners that would take a run at buying assets from North American peers.

Mark Bristow, Barrick’s CEO, has been quite adamant about selling off assets that it does not own 100% of. Or assets that do not produce over 500,000 ounces per year for 10 years.

The second major deal this week was again an Australian miner, this time Evolution Mining (EVN:ASX) acquiring the Red Lake package from Newmont-Goldcorp for $375 million.

I believe the domino chain has begun to fall with Kalgoorlie and Red Lake, two non-core assets being sold along with Detour being acquired.

This package of assets has an incredible mining history.

But it does not move the needle for a company like Newmont-Goldcorp.

Gold Deals – The Next Chapter for Kirkland Lake

The big earthquake was when Kirkland Lake (KL.TO) flexed its muscle and large market cap to buy Detour Gold (DGC.TO) for $4.9 billion in Kirkland shares.

Kirkland’s goodwill from the markets has been taken away until CEO Tony Makuch and his team can prove this deal was a profitable acquisition.

Detour is a massive leveraged play to the price of gold since their costs are in Canadian dollars. And I don’t see the CAD getting stronger any time soon.

I also expect the U.S. dollar to stay strong and perhaps even get stronger. Both work in Kirkland’s advantage in this acquisition.

I think Tony and his team will bring in some synergies and cost improvements.  But the wildcard is the price of gold. This was a bold move by Kirkland, and kudos to Tony and his team for having the balls to do this deal.

But, if gold breaks down below $1,300, Kirkland will have a tough time running a profitable operation at Detour.

If gold stays rallies and stays above $1,500, Tony will look like a better looking version of Mark Bristow, who is known for his bold moves.

It’s incredible to think only four years ago, I bought just under 10% of Newmarket Gold for under CAD $1.50 per share. Newmarket Gold owned the Fosterville Gold Mine at the time, and it’s now Kirkland Lake’s flagship asset.

Although I was one of the first to the story, I’m still kicking myself for selling too early as Kirkland Lake rocketed to the stratosphere.

This deal is going to get a lot of naysayers.

And I remind these naysayers, that many of you poo-poo’d the deal between Kirkland Lake and Newmarket Gold back in 2016.

How wrong were you? Considering the share price went from $3 to $60 – pretty wrong.

While I do believe this deal is full value for the current Detour Mine, Tony and his team clearly have a long-term angle. Just like they did with Newmarket Gold and Fosterville.

I am going to sit on the sidelines for now and watch the best performing gold company of this decade execute its game plan.

Breaking Down the Top Performing Gold Stocks of the Year

I spent countless hours every week analyzing the next acquisition targets and I have my shortlist.

So, how do your gold producers stack up to the rest of the assets around the world?

Below is a chart that shows the production cost curve for primary gold producers.

If your gold company isn’t making money at current gold prices—time to sell it and buy something that is. Focus on Profitable Production. 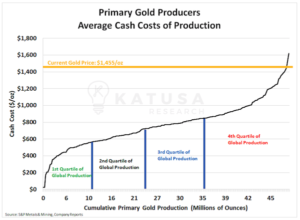 In the charts below, you’ll find the year-to-date performance of primary gold producers. And the minimum production we’re including is 50,000 ounces per year.

Let’s start with the big boys.

This includes North American or Australian listed primary gold producers that produce over 1 million ounces of gold per year. The average return for the senior producers this year is +65%, or 47% excluding Sibanye. 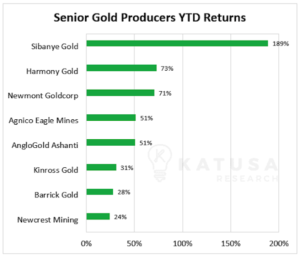 Now let’s move on to the mid-tiers.

This group produces between 250,000 and 1 million ounces of gold. The mid-tier producers average return year to date is +34%. 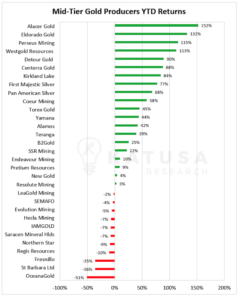 And finally, below you’ll find the YTD returns of junior producers. 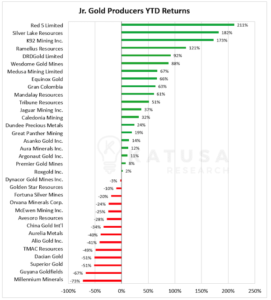 So, the question to ask yourself is this – how did your picks standup?

Are you comfortable with your investments, or did these returns make you squirm in your seat a little bit?

At Katusa Research, my team and I pride ourselves on our analysis.

And there’s no shortage of deals and opportunities right now, especially during the next 30 days of Tax Loss season.