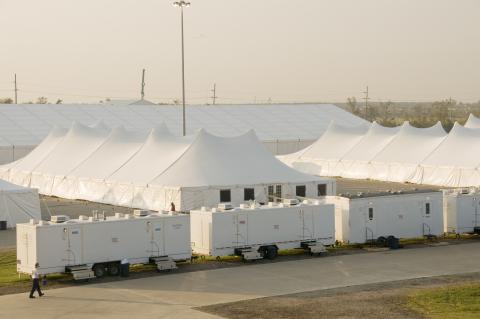 This is the first of a 2 part series which speaks to the fact that (1) the majority of citizens from any country, including America would participate in roundup and exterminations just like Hitler, Stalin and Mao; and (2) Most Americans would willingly surrender themselves to the camps. A couple of psychology studies speaks to the fact that this is a real threat in America’s near future.

There is no question that the Democrats, controlled by the Deep State, are engaged in a Bolshevik Revolution. The impeachment proceedings, complete with secret hearings, hearsay witnesses, etc., speak to what is going on. If these modern-day communists are successful, they will surely fall into the same pattern of behavior as previous totalitarian regimes and begin the roundups and the purges. This is what everyone should know. Let’s start with the studies that speaks to this phenomenon.

The Milgram Study Says Concentation Camps Could Happen In America

Mankind has always engaged in a series of forced removal of its political undesirables, which usually culminated with deadly consequences. This fact is not lost upon the inhabitants of this country. The United States has a checkered past when it comes to the treatment of political undesirables. In this country, Plymouth Colony banished individuals who had the “wrong beliefs” and the “wrong attitudes” to a near certain death in the New England winter. This was followed by the Indian Removal Act, initiated by President Andrew Jackson, which led to the infamous Trail of Tears. The latter incident led to the widespread practice of placing Native American tribes on reservations under very unhealthy, and often deadly consequences. In 1942, America citizens of Japanese descent were sentenced to relocation camps for the crime of being the wrong race in a time of war. The Germans also had their concentration camps and the Russians had their Gulags, and on and on it goes. Despite the fact that history is replete with examples of forced incarcerations of political undesirables and in many cases, extermination of innocents, most Americans refuse to believe it could ever happen here. “We are too civilized or we have the Bill of Rights, are the two most common justifications used to reinforce the mass denial systems of the sheep of this country. Yet, another voice emerges on this topic from the world of scientific research. The psychological research is stunning in that it shows that a holocaust could occur in the United States and the circumstances would not have to be extraordinary for this to occur.

Stanley Milgram and the Solomon Asch Experiments On Obedience

In 1963, after listening to Americans proclaim their superiority to the Nazis by indicating that our fair and virtuous society would never engage in what the Germans did in the pre-WWII years,  Yale University professor, Dr. Stanley Milgram, set out to test that unproven hypothesis. What the Milgram research indicated was that 67% of the population are nothing but a bunch of sheep as the experiment proved that most subjects would follow the orders of a perceived authority figure to put an innocent to death even where there was a distinct absence of real coercion. Milgram proved that most people need very little provocation to carry out a “Lord of the Flies” agenda. Prior to the Milgram experiment, Solomon Asch conducted his own experiment on mindless conformity. Asch demonstrated that just under 60% of the people could be coerced into giving what they knew was the wrong answer by the ever so subtle application of peer pressure. By having six confederates in the experiment, give the wrong answer, most of the test subjects would also give what was obviously the wrong answer in an effort to go along to get along. Americans, like any other people, are largely conformist sheep. People in this country who mistakenly believe as most Americans did in 1963 that we could never have a genocidal internment in this country, believe so at their own peril. Some Americans who believe that this event is inevitable, are obviously not aware of the follow up research in response to the Milgram and Solomon Asch experiments, for it there was a silver lining the research, it is that when people become aware of our tendencies to conform are known, the rates of compliance go down. Therefore, simply knowing about the phenomenon makes it less likely to occur.  What is most frightening to me is that when we compare the psychological experiments of the 1960’s to today’s population, it is noteworthy that the people of the 1960’s did not live under the NDAA, Executive Order 13603 and REX 84. This means that genocidal internment is much more likely today.

A Ray of Hope for Spreading the Word

Later research confirmed that when people are educated about the subtleties of peer pressure, group think and our need to obey, the Milgram and Solomon Asch rates of compliance dropped by about 50%.   The totality of this research has clear implications for our time in history. If we educate as many people about what is really going on in this country with regard to the loss of civil liberties and current events, we can lessen the likelihood that Americans will engage in genocidal internment of its own citizens. The disinfectant of the light of day is our best ally. Everyone, and I mean everyone needs to become a citizen journalist and report on the abuses of this administration and the banksters  who control the politicians. For if we do next to nothing, we are very likely sealing our fate. Consider the words of warning of Solzhenitsyn.

“And how we burned in the camps later, thinking: What would things have been like if every Security operative, when he went out at night to make an arrest, had been uncertain whether he would return alive and had to say good-bye to his family? Or if, during periods of mass arrests, as for example in Leningrad, when they arrested a quarter of the entire city, people had not simply sat there in their lairs, paling with terror at every bang of the downstairs door and at every step on the staircase, but had understood they had nothing left to lose and had boldly set up in the downstairs hall an ambush of half a dozen people with axes, hammers, pokers, or whatever else was at hand?… The Organs would very quickly have suffered a shortage of officers and transport and, notwithstanding all of Stalin’s thirst, the cursed machine would have ground to a halt! If…if…We didn’t love freedom enough. And even more – we had no awareness of the real situation…. We purely and simply deserved everything that happened afterward.”