In his quest for front-runner status in the 2020 presidential campaign, Pete Buttigieg has crafted an image for himself as a maverick running against a broken establishment.

On the trail, he has invoked his distinction as the openly gay mayor of a de-industrialized Rust Belt town, as well as his experience as a Naval reserve intelligence officer who now claims to oppose “endless wars”. He insists that “there’s energy for an outsider like me,” promoting himself as “an unconventional candidate.” 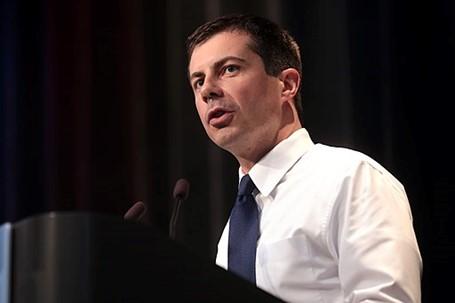 When former Secretary of State John Kerry endorsed Joe Biden this December, Buttigieg went full maverick. “I have never been part of the Washington establishment,” he proclaimed, “and I recognize that there are relationships among senators who have been together on Capitol Hill as long as I’ve been alive and that is what it is.”

But a testy exchange between the South Bend mayor and Rep. Tulsi Gabbard during a November 20 Democratic primary debate had already complicated Buttigieg’s branding campaign.

Like Buttigieg, Gabbard was a military veteran of the 9/11 generation. But she had taken an entirely different set of lessons from her grueling stint in Iraq than “Mayor Pete.” Her campaign had become an anti-war crusade, with opposition to destructive regime change wars serving as her leitmotif.

After ticking off her foreign policy credentials, Gabbard turned to Buttigieg and lit into him for stating his willingness to send US troops to Mexico to crack down on drug cartels.

A visibly angry Buttigieg responded by accusing Gabbard of distorting his record, then quickly deflected to Syria, where he has argued for an indefinite deployment of occupying US troops.

Rehashing well-worn criticism of Gabbard for meeting with Syrian President Bashar al-Assad during a diplomatic visit she took – her trip was devoted to de-escalating the US-backed proxy war that had ravaged the country’s population – Buttigieg attacked the congresswoman for engaging with a “murderous dictator.”

Throughout the exchange, Buttigieg appeared shaken, as though his sense of inviolability had been punctured. Gabbard had clearly struck a vulnerable point by painting the self-styled outsider as a conventional DC-style politician unconsciously spouting interventionist bromides.

How could someone who served in the catastrophically wasteful US wars in the Middle East, and who had seen their human toll, be reckless enough to propose sending US troops to fight and possibly die in Mexico? “But Assad!” was the best response he could muster.

The remarkable dust-up highlighted a side of the 37-year-old political upstart that has been scarcely explored in mainstream US media accounts of his rise to prominence. It revealed the real Buttigieg as a neoliberal cadre whose future was carefully managed by the mandarins of the national security state since almost the moment that he graduated from Harvard University.

After college, the Democratic presidential hopeful took a gig with a strategic communications firm founded by a former Secretary of Defense who raked in contracts with the arms industry. He moved on to a fellowship at an influential DC think tank described by its founder as “a counterpart to the neoconservatives of the 1970s.” Today, Buttigieg sits on that think tank’s board of advisors alongside some of the country’s most accomplished military interventionists.

Buttigieg has reaped the rewards of his dedication to the Beltway playbook. He recently became the top recipient of donations from staff members of the Department of Homeland Security, the State Department, and the Justice Department – key cogs in the national security state’s permanent bureaucracy.

His Harvard social network has been a critical factor in his rise as well, with college buddies occupying key campaign roles as outside policy advisors and strategists. Among his closest friends from school is today the senior advisor of a specialized unit of the State Department focused on fomenting regime change abroad.

That friend, Nathaniel “Nat” Myers, was Buttigieg’s traveling partner on a trip to Somaliland, where the two buddies claimed to have been tourists in a July 2008 article they wrote for The New York Times.

Their contribution to the paper was not any typical travelogue detailing a whimsical safari. Instead, they composed a slick editorial that echoed the Somaliland government’s call for recognition from the US government. It was Buttigieg’s first foreign policy audition before a national audience.

A short, strange trip to Somaliland

Under public pressure for more transparency about his work at the notoriously secretive McKinsey consulting firm, the Buttigieg campaign released some background details this December. The disclosures included a timeline of his work for various clients that stated he “stepped away from the firm during the late summer and fall of 2008 to help full-time with a Democratic campaign for governor in Indiana.”