by Moon of Alabama, via Russia Insider: 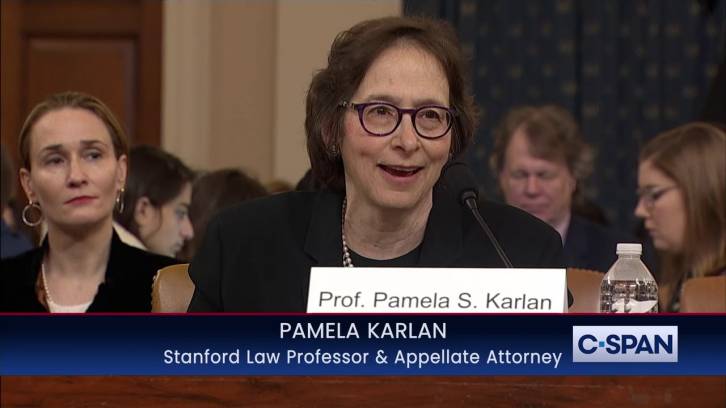 During yesterday’s impeachment hearing at the House House Judiciary Committee one of the Democrats’ witnesses made some rather crazy statements. Pamela Karlan, a Stanford law professor, first proved to have bought into neo-conservative delusions about the U.S. role in the world:

As people in Bolivia and elsewhere can attest the United States does not promote democracy. It promotes rightwing regimes and rogue capitalism. The U.S. is itself not a democracy but a functional oligarchy as a major Harvard study found:

But worse than Karlan’s pseudo-patriotic propaganda claptrap were her remarks on the Ukraine and Russia:

That was not an joke. From the video it certainly seems that the woman believes that nonsense.

For one the Ukraine is not fighting “the Russians”. The Kiev government is fighting against east-Ukrainians who disagree with the Nazi controlled regime which the U.S. installed after it instigated the unconstitutional Maidan coup. Russia supplies the east-Ukrainians and there were a few Russian volunteers fighting on their side but no Russian military units entered the Ukraine.

But aside from that how can anyone truly believe that the Ukraine “fights the Russians so we don’t have to fight them here”?

Is Russia on the verge of invading the United States? Where? How? And most importantly: What for?

How would that be in Russia’s interest?

One must be seriously disturbed to believe such nonsense. How can it be that Karlan is teaching at an academic level when she has such delusions?

And how is it in U.S. interest to give the Ukraine U.S. taxpayer money to buy U.S. weapons? The sole motive behind that idea was greed and corruption, not national interest:

[U.S. special envoy to Ukraine] Volker started his job at the State Department in 2017 in an unusual part-time arrangement that allowed him to continue consulting at BGR, a powerful lobbying firm that represents Ukraine and the U.S.-based defense firm Raytheon. During his tenure, Volker advocated for the United States to send Raytheon-manufactured antitank Javelin missiles to Ukraine — a decision that made Raytheon millions of dollars.

The missiles are useless in the conflict. They are kept near the western border of Ukraine under U.S. control. The U.S. fears that Russia would hit back elsewhere should the Javelin reach the frontline in the east and get used against the east-Ukrainians. That Trump shortly held back on some of the money that would have allowed the Ukrainians to buy more of those missiles thus surely made no difference.

To claim that it hurt U.S. national interests is nonsense.

It is really no wonder that U.S. foreign policy continuously produces chaos when its practitioners get taught by people like Karlan. In the Middle East as well as elsewhere Russian foreign policy runs circles around U.S. attempts to control the outcome. One reason it can do that is the serious lack of knowledge and realism in U.S. foreign policy thinking. It is itself the outcome of an educational crisis. U.S. ‘political science’ studies implement a mindset that is unable to objectively recognize the facts and fails to respond to them with realistic concepts.

The Democrats are doing themselves no favor by producing delusional and partisan witnesses who repeat Reaganesque claptrap. They only prove that the whole affair is just an unserious show trial.