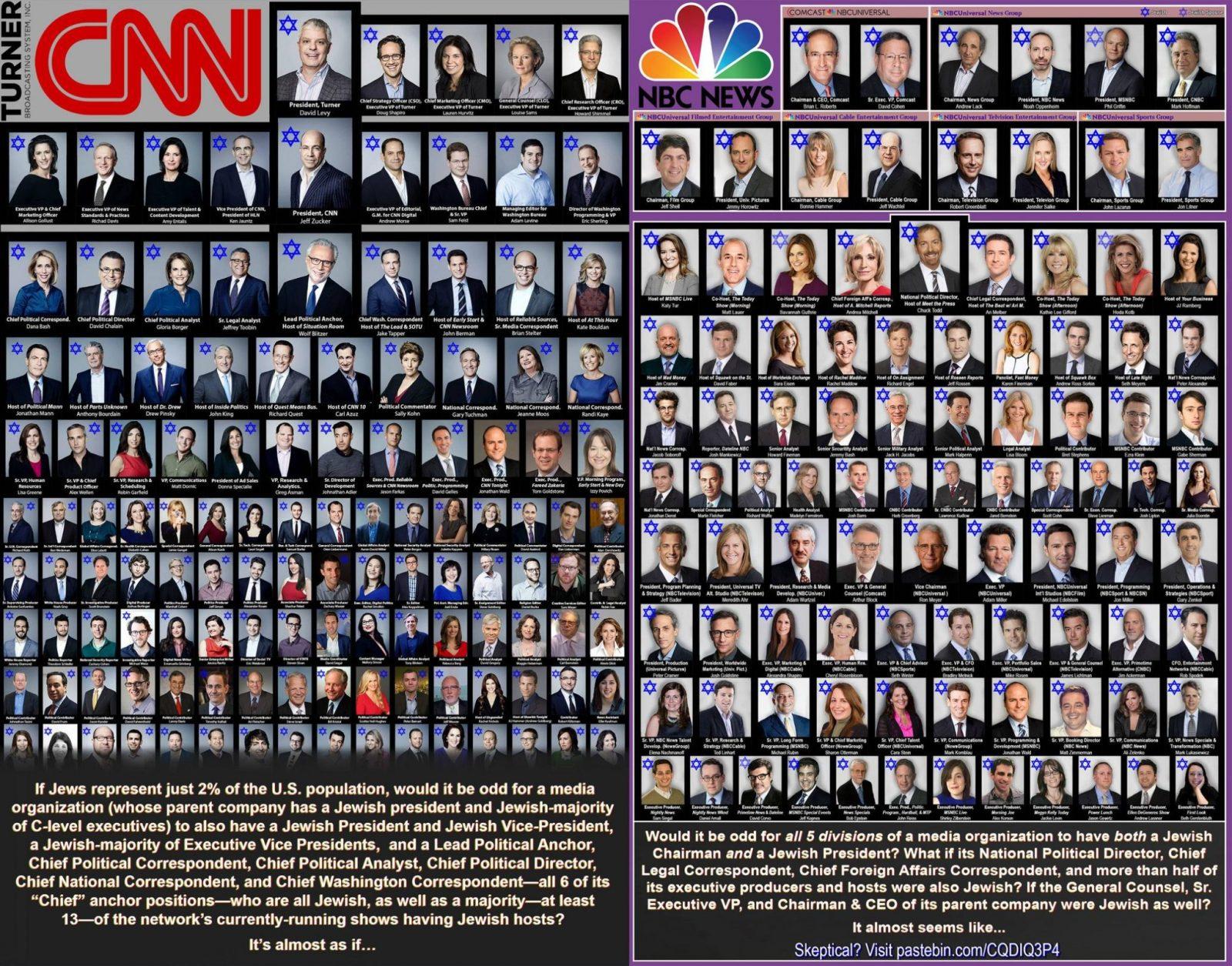 • Jewish Banking Houses and Merchant Families were directly responsible for the unlawful passage of the Federal Reserve Act of 1913 and, therefore, accountable for the boom and busts that have repeatedly shocked the US economy and ruined the American people.  The Federal Reserve Bank is the most powerful of all the central banks tasked with artificially inflating the world’s premier reserve currency and fake fiat money—the US Dollar.  The petrodollar in particular is destined for an incomparable collapse as the reign of the once Almighty Dollar is over.  Because the Global Economic & Financial System is hardwired to the US dollar, the banskters know that when it drops like a rock, it’s all over.  This is why they are engineering the greatest and longest sucker’s rally of all time at this very moment.

• The official debt of the United States government is $23.1 trillion as of December 2, 2019, which is owed to primarily foreign banking interests that are owned and/or controlled by Jewish banking families such as the Rothschilds and Rockefellers.

• The Israeli Government, working in tandem with the Chicago Jewish Mafia and Zionist-controlled Military Industrial Complex, ordered the assassination of President John F. Kennedy carried out by the Central Intelligence Agency. See CHICAGO SUPERMOB: The Jewish Mafia That Killed Kennedy

• The false flag terrorist attacks carried out on September 11, 2001 were ordered by the Khazarian Mafia headquartered in Tel Aviv and coordinated with Neocon Zionists in Washington, D.C. See: INDISPUTABLE EVIDENCE CONFIRMS: 9/11 was both an “Inside Job” and “Mossad Job”

• Not only the state-sponsored 9/11 black operation, but also the Oklahoma City bombing, the Las Vegas massacre, Sandy Hook School slaughter hoax, Parkland Florida High School mass shooting and many other mass casualty events were ordered by the International Banking Cartel.  In point of fact, all of the Operation Gladio-style mass shootings were meticulously planned to achieve certain goals such as new draconian gun control measures statewide and/or nationwide.  The reality is that Terrorism, Inc. is wholly controlled by the International Banking Cartel inasmuch as it takes a LOT of money to fund these highly consequential black ops and psyops.

• The massive and ever-growing Military-Industrial Complex is fundamentally a Jewish creation headquartered in Chicago which systematically starts “forever wars” in order to maintain and/or increase the enormous revenues streams taken (read: stolen) from the U.S. Treasury.  The MIC, in collusion with the National Security State, is the most powerful force and corporate entity in the world today.

• This particular tribe learned long ago that whoever controls the media controls the society, the nation and the world. Toward that end, the entire mainstream media (MSM) in the USA is completely controlled by Jewish money and investment. So are all the top positions of the MSM occupied by Jewish CEOs, CFOs and COOs as well as Presidents and Board Directors. Because their Khazarian Mafia masters and handlers are in charge of the CIA’s Mockingbird Media, they all realize that any serious transgressions against The Company (aka the CIA) will occur on pain or death, or worse. 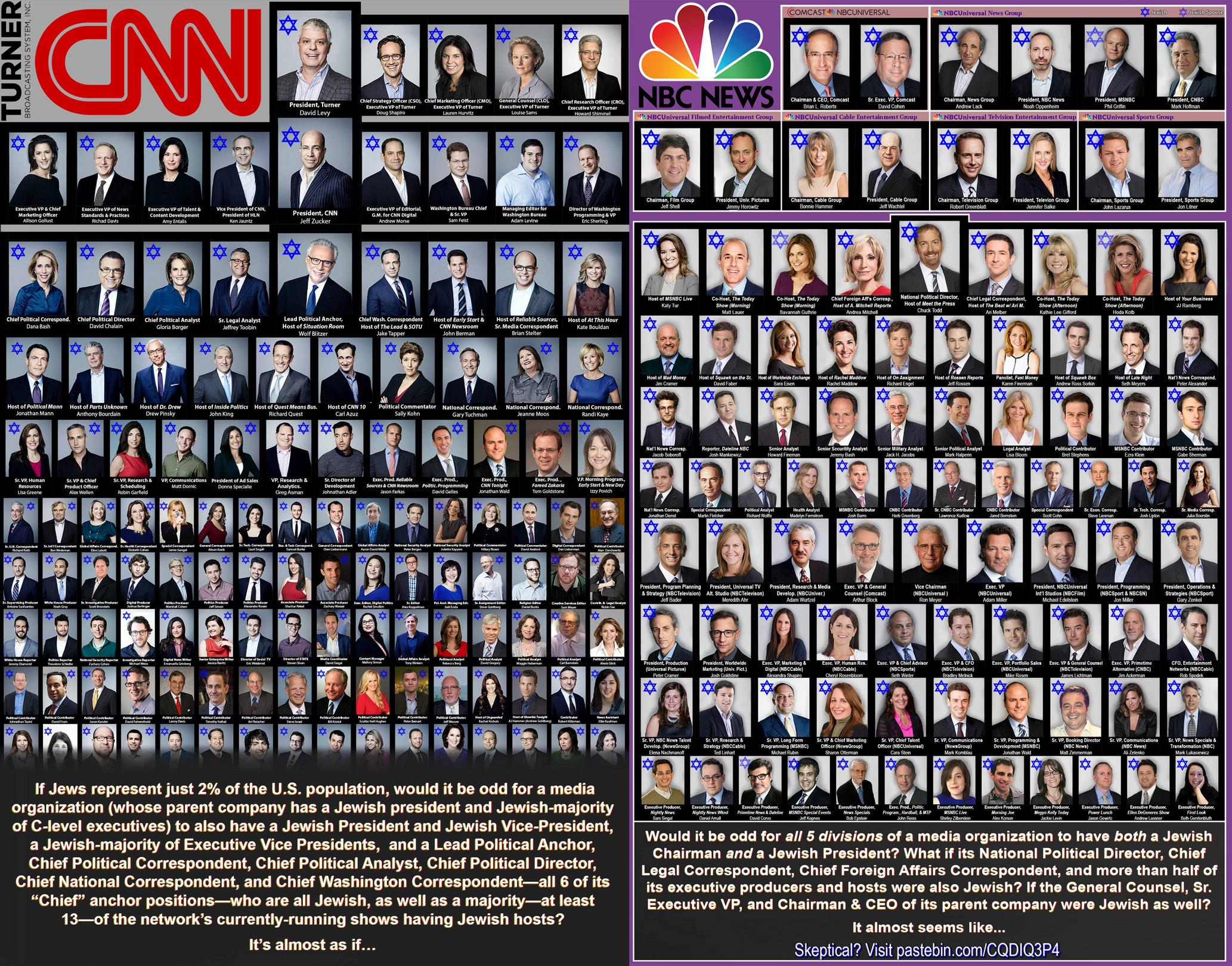 • Even more significantly, all of Big Tech and Big Social Media is run by members of the Jewish Tribe. Almost all of the Big Social Media start-ups are commandeered by young Jewish college kids who have been given stolen proprietary information or patents by attorneys or other covert agents of DARPA, the C.I.A. or the DIA. The IPOs are then managed in such a way so as to guarantee immediate billionaire status to these mind-controlled puppets who are then easily kept on the CIA reservation under threat of losing everything.  The notorious Mark Zuckerberg, just like Bill Gates, is just one of many fake whiz kids who was set up from the start to autocratically lead a major company for his C.I.A. masters.

• What needs to be said about the ironclad control that Jews have always exerted over Hollywood from the very beginning. Every major studio in Tinseltown was founded by Jewish entrepreneurs originally from Eastern or Central Europe if not Russia. Even a cursory examination of all the most successful CEOs and presidents, directors and producers, screenwriters and film editors, actors and actresses, cinematographer and directors of photography, as well as talent agents and scouts will prove that Hollyweird is a fundamentally Jewish industry from the top down and bottom up.  By the way, there’s a very good reason why the Jews established and continue to run Hollywood as follows: “Hollywoodism: Jews, Movies and the American Dream”.

• Big Pharma is almost entirely owned and operated by Jewish families, stockholders, investors, hedge funds, etc. The Pharmaceutical Industry is dominated by various Jewish Crime Families such as the Sacklers, who were just forced into bankruptcy because of the nationwide opioid epidemic. It is primarily Jewish physicians, scientists, lawyers, lobbyists and politicos who are also at the forefront of the deadly and destructive Super-Vaccination Agenda.

SUPER-VACCINATION AGENDA Being Foisted On The USA 24/7

• Whenever trillions go missing from the Pentagon, DoD or any other organ of the U.S. Federal Government, it’s always announced by Jewish comptrollers, accountants or other administrators who have no explanation for the unparalleled grand larcenies. Even those directly responsible for these grand thefts somehow completely avoid prosecution or scrutiny. In this way, the Jewish banksters have conditioned the American people to accept missing trillions as business as usual whenever it concerns US government bookkeeping. See: $21 Trillion of US Government Undocumented Transactions

• The vast and complex web of interlocking directorships that predominate throughout Corporate America are populated with business magnates and VIPs who work directly for hidden Jewish banking interests. Serial corporate criminals such as Goldman Sachs, JPMorgan Chase, Bank of America, Citigroup, Wells Fargo, The New York Times, The Washington Post, CNN, MSNBC, Monsanto, BP, Google, Facebook, Twitter, etc. are all run by mostly Jewish CEOs and Boards of Directors. Likewise, these corporate entities are effectively owned by Jewish institutional investors who possess the majority ownership in the form of both equities and debt instruments.

• The many “ISMs” which plague American society today, which are purposefully used as wedge issues that are driven deeply into the heart of the body politic, have been manufactured by Jewish intellectuals, academics, writers, philosophers, thought leaders, social scientists and political reformists. For example, the most destructive of these is Cultural Marxism, a highly divisive and socially devastating social theory and critical philosophy painstakingly developed by the Frankfurt School that was associated with the Institute for Social Research, at Goethe University in Frankfurt, Germany. This extremely deceptive movement was populated exclusively by Jewish intellectuals whose primary purpose was to fabricate a blueprint for the complete takeover of Western civilization, which they have practically done. Other repugnant philosophies, movements and ISMs originated by similar groups of Jewish intellectuals and thinkers include Communism, Fascism, Bolshevism, Socialism, Feminism, Trangenderism, as well as the prevailing worldwide regime of Political Correctness that’s currently destroying societies everywhere.

KEY POINT: There is no greater threat to the American Republic than the slowly rising tide of bolshevism.  The following excerpt provides vitally important history and relatively unknown present context for the dire state of affairs shaping up throughout these once United States.

“The Bolshevik Revolution in Russia also saw years of increasing violence and engineered chaos prior to March of 1917.  Just like the Democrat Party has perpetrated since 2016, the Bolsheviks manufactured more and more political mayhem and violent events before the hot phase of the incorrectly named ‘Russian Revolution’.  It was, as a matter of historical fact, not a Russian civil war; rather, it was a Bolshevik Revolution initiated and funded by the International Banking Cartel headquartered in London, New York City and Frankfurt.  The foreign-controlled leadership of that staged revolution was comprised of Ashkenazi Jewish banksters whose only interest was conquering the Russian Motherland in order to exploit its natural resources and enslave the citizens, which they did for well over 70 years.  There is a similar communist plot now afoot in the USA where Deep State is creating an environment of national pandemonium by using Gladio false flag mass shootings, CIA-directed coup attempts and society-destroying Cultural Marxism.  These and several other means are being deliberately utilized to divide and conquer the American people into two camps who are now fighting a cold civil war.  Once the hot phase of this intensifying Purple Revolution begins, the Left will release their hidden bolsheviks in every city across the 50 states.  This major move will not be made until the level of societal disorder and governmental anarchy is so great that the populace is unable to muster up a meaningful response.  It’s of paramount importance to understand that the relentless acts of state-sponsored terrorism, to include the devastating geo-terrorism, are really stealth attacks on the U.S. citizenry and their property.  In other words, the hot civil war has already begun in earnest yet very few are even aware they are under withering assault.  This is exactly how the bolsheviks did it in Russia during the lead-up to war in 1917 and beyond.” (Source: THE “CASSANDRA PROPHECY”: Everything Changes After Election Day 2020) 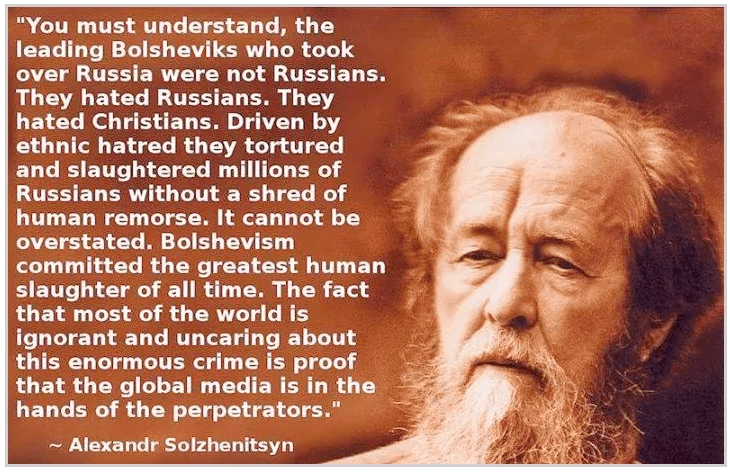 • Perhaps the greatest infiltration of the American Republic by these ultra-liberal, treacherous traitors concerns the total takeover of the nations’s educational system. In so doing, these cultural marxists have exerted truly terrible influences on the young, impressionable minds in Pre-K, Kindergarten, Elementary Schools and High Schools across the country. Of course, these same radical Leftists and educational anarchists have already taken over the public university systems in all 50 states, as well as many private colleges and universities. This is control is conducted through the manipulation of federal funding criteria and charitable contributions to university endowments. They know that whoever makes the biggest donations decides what will, and what will not be, taught in the institutions of of higher learning.